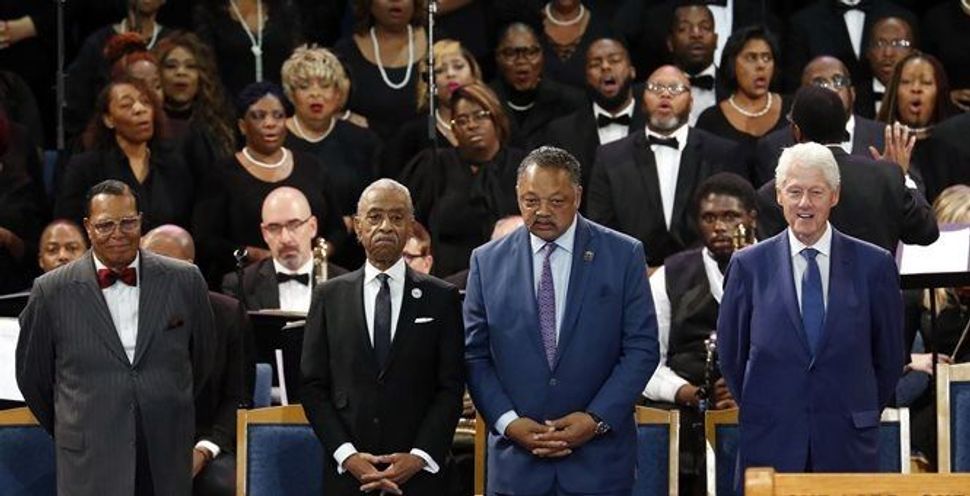 Nation of Islam leader Louis Farrakhan — who has for decades been criticized for anti-Semitism and homophobia — had a prominent place on the dais at Aretha Franklin’s star-studded funeral, sitting three seats away from former president Bill Clinton.

Farrakhan wrote in The Final Call, the Nation of Islam’s newspaper, that Franklin had shown support in 1972 after one of his mosques was attacked by police. “I will cherish her life, her voice, and her soul and remember her with deep and abiding love for what she did for me, our people and for all of humanity who were blessed by her time and service among us,” Farrakhan wrote.

Unlike Clinton and others he shared the stage with, including the Revs. Jesse Jackson and Al Sharpton, Farrakhan did not deliver a eulogy or sermon. But he was greeted warmly by many also in attendance, including Detroit Pistons basketball legend Isiah Thomas, who gave him a big hug.

Thomas is now an analyst for NBATV and the team president of the New York Liberty of the Women’s National Basketball Association — a league that has prioritized outreach to gay fans and players, which is a marked contrast to Farrakhan’s longstanding homophobia.

The pinned tweet on Farrakhan’s Twitter account, which was recently de-verified as part of the social media company’s purge of hate figures, includes a link to a sermon in which he promises “Thoroughly and completely unmasking the Satanic Jew and the Synagogue of Satan.”

Despite his decades of controversy, Farrakhan remains admired by many prominent African-Americans. He enlisted some of the world’s most famous musicians, including Stevie Wonder and Chaka Khan — both of whom also performed at Franklin’s funeral — to participate in his recent seven-album box set “Let’s Change the World.”

Farrakhan said in August that a documentary tracking his long musical career and showing the making of his album would be aired by Netflix in August, but the entertainment company quickly announced that it would not stream the film.