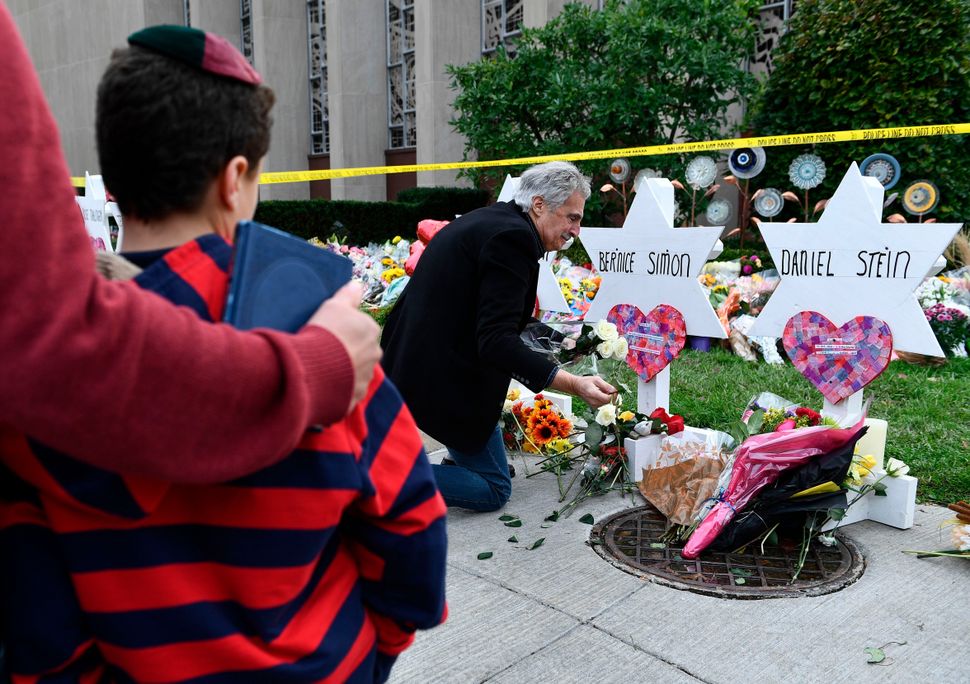 The terrorist attack that killed 11 Jews in Sabbath prayer on October 27 was the worst act of anti-Semitism in America, ever. But it was hardly the first time Jews have been targeted for injury and death within the shores of a nation that is supposed to offer us refuge and acceptance.

While violent anti-Semitism is, as it is said, the oldest hatred, manifested to a horrific extent in just the last century, what is happening now is a peculiar 21st century American phenomenon.

And it is America’s to fix.

Yes, it is comforting to receive support from Israelis and others, and to recognize that there are threats we all share simply by being who we are.

That’s not going to deal with anti-Semitism here, though. It may be connected to a worldwide phenomenon, but it is happening in America, right now, in an entirely different, homegrown political and historical context. This is not Berlin, 1938. It is not Israel since 1948. It is America, 2018.

As I see it, that means the massacre of Jews in Pittsburgh is an outgrowth of a surge of ultra-right-wing white nationalism that has drawn succor from the campaign and presidency of Donald Trump and those who enable him with words, or with their silence. I wrote this the afternoon of the attack and feel even more strongly in the days since.

Fair points. There’s a simple answer to the second question. What happened in Pittsburgh was the worst act of anti-Semitism in American history, of a scale far more horrific that anything that has occurred before, far deadlier than any random verbal attack on a college campus and far worse than anything emanating from the political far left.

And to the first. Yes, lives were lost when Barack Obama was in the White House — for example, in 2014 when a white supremacist killed three (non-Jewish) people at a Jewish community center in Kansas. Obama immediately offered condolences to the families and ordered his administration to help in the investigation.

After the Pittsburgh killings, Trump also expressed words of condolence. Then he quickly went off script, tweeting slurs about the media, issuing partisan attacks at rallies, and essentially blaming the victims for not being armed well enough to thwart the gunman.

My colleague J.J. Goldberg compiled an exhaustive analysis of attacks against Jews in the last four decades, combined with other recent activities, and concluded: “Taken together, they hint inescapably at the threat posed to American Jews, whatever their political views, by the growth of far-right violent extremism at the fringes of Donald Trump’s base, with his subtle and not-so-subtle encouragement.”

That threat is happening in a deeply American context. Consider last week alone. On Wednesday, a white gunman stormed a supermarket in Kentucky after being locked out of a predominantly black church and killed two black people, reportedly after making a racist remark. He spared another man, who was white, telling him, “Whites don’t kill whites.”

On Thursday, former presidents and their wives, top Democratic officials, CNN, and others who have been Trump critics were the targets of attempted assassinations when they were all mailed similar bomb packages. A white supremacist with virulently pro-Trump, racist and anti-Semitic stickers on the van he lived in, was arrested Friday.

And then the massacre on Saturday.

I’ve said from the depths of the Trump presidential campaign, when Jewish journalists were subjected to unprecedented and well-documented online harassment, that our new vulnerability must awaken our compassion.

That is ever more true today. Our vulnerability must help us see that we are a targeted minority in America like other targeted minorities. The Pittsburgh killer didn’t rant and rave on social media about Israel or Palestinians or theological issues. He hated Jews because Jews helped other immigrants come to this country, as so many of us had come here, seeking refuge.

At an extraordinary interfaith prayer service last night at my synagogue, Ansche Chesed on Manhattan’s Upper West Side, a broad array of rabbis and other clergy came together to teach, preach, sing, pray and help us console each other. I was struck by a comment of Bari Kahn, of the Muslim Community Network, before he began his brief prepared remarks.

When he first heard of the shooting, he was afraid the gunman was Islamic and relieved when that was not the case.

Isn’t that what it’s like to be a targeted minority in America? How often have we as Jews had the same reaction — pride when one of us wins another Nobel Prize, finds a new cure, invents another amazing device? And then how often do we cringe in fear when one of us is found to be a crook, a murderer, a predator, a detriment to society?

America has been a violent place for African Americans since its inception, and for other minorities for centuries. Jews have been relatively immune — privileged by the fact that so many of us are white, educated, prosperous, unthreatening, willing to fit in.

Now, from the blood stained pews of a Pittsburgh synagogue a century and a half old, we must confront how vulnerable we really are. And why. And then work with other Americans — all those good-hearted Americans, who reached out, and contributed money and support, and joined with us in grief and resolve — to resist the evil that is among us, because we know from painful experience that if we don’t, someone else will be next.