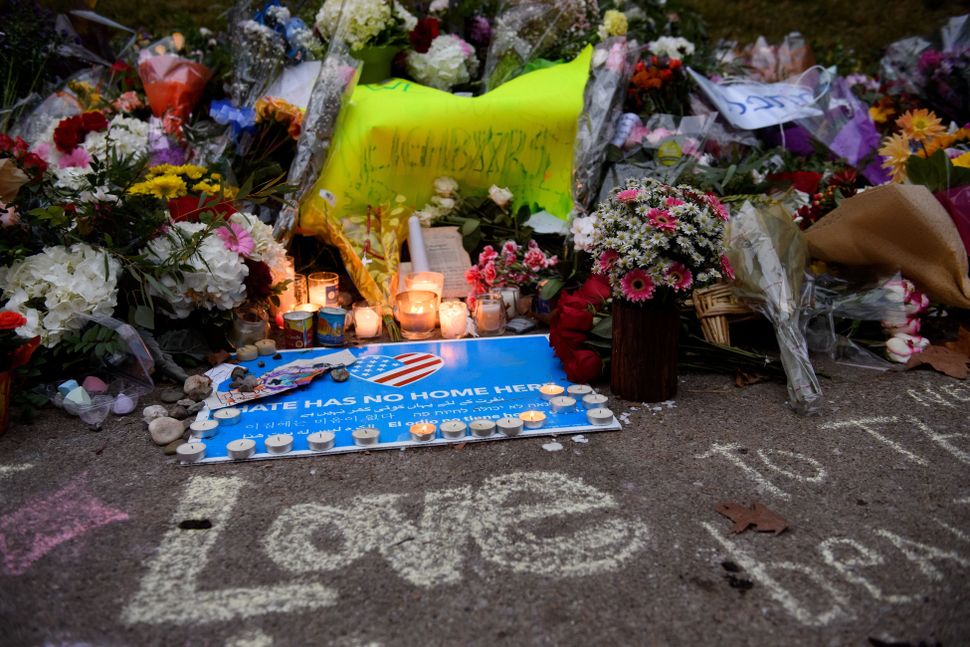 The following is a joint editorial drafted by Jane Eisner, Editor-in-Chief of The Forward, and Dovid Efune, Editor-in-Chief and CEO of The Algemeiner, and signed by a dozen leaders in American Jewish journalism.

Earlier this year, our colleagues at the three leading Jewish newspapers in the U.K. published the same front-page headline and joint editorial voicing concern over rising anti-Semitism in Britain’s Labor party.

Today we have found a mournful occasion to follow in their footsteps.

For many Jews, the United States has long held a unique role in our collective imagination. It has been an unprecedented land of promise, of refuge, of freedom, opportunity and of safety.

But after the horrific attack this past Shabbat at the Tree of Life Synagogue in Pittsburgh in which 11 of our brothers and sisters were brutally murdered, we can’t help but be shaken and concerned for the America we have come to know and love.

We therefore join together to unequivocally condemn this brutal act of anti-Semitism and all deadly acts of hate. We also condemn the climate of hate that has been building for some time now, especially on college campuses and on social media, where the veneer of anonymity has allowed anti-Semitic cesspools to flourish, and from irresponsible political leaders who engage in hateful speech and who are abetted by the silence of others.

As journalists, we hold a variety of opinions about politics in this country and in Israel; the American Jewish community is diverse, and those differences are reflected on the pages of its media.

In coming together now, we are not erasing those differences, but rising above them, to issue a call for solidarity and respect, and asking our political and communal leaders to do the same.

The gunman who invaded a sanctuary on Shabbat did not distinguish among his victims. To him, they were all Jews.

We are all Jews. Let this horrific massacre be a moment of redemption as well as grieving. Let us argue with each other as Hillel argued with Shammai — with civility. Let us acknowledge our common humanity with other Americans who have been subject to unconscionable violence, too.

Jewish media has a long and proud history in America, and we pledge to continue our mission to inform, reflect and bind our communities, even more necessary in this painful time.