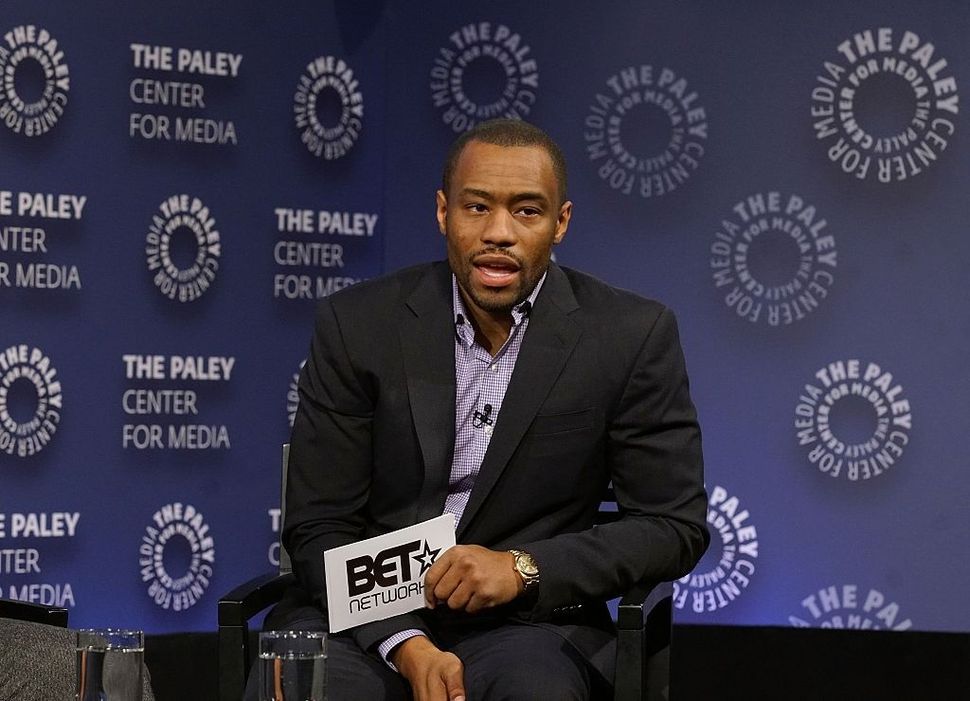 Moderator Marc Lamont Hill attends BET Presents ‘An Evening With ‘The Quad” At The Paley Center on December 7, 2016 in New York City. Image by Getty Images

On Wednesday, CNN commentator Marc Lamont Hill was fired from CNN for comments he made about Israel during a United Nations Meeting for The International Day of Solidarity with the Palestinian People.

During this meeting, Hill echoed a phrase that is common in the Palestinian liberation movement: “From the river to the sea, Palestine will be free.”

Geographically, “from the river to the sea” encompasses all of Israel, from the Jordan River to the Mediterranean so some believe this statement to be a call to dismantle Israel or even for the genocide of Israeli Jews. Others believe it’s simply a lyrical way to convey solidarity for the Palestinian people and support for a one-state solution.

Because of my own identity and my own support for a two-state solution, I personally abhor the use of the phrase. I absolutely don’t believe Marc Lamont Hill should have used it. As a journalist and as a public figure, he should be held — and he should hold himself — to a higher standard.

A simple Google search would have alerted him to the fact that it was at best a controversial phrase and, at worst, deeply offensive.

Still, while I disagree with his use of the phrase, I don’t think he should have been fired.

When my current partner and I were first dating, he casually mentioned to me that he was thinking of going on an activism trip to Palestine. I was concerned for his safety and expressed this to him. He then assured me that Tel Aviv was perfectly safe.

I was quiet, shocked, and a little offended as what he had said sunk in. My partner considered all of Israel to be Palestine, comments which echo Marc Lamont Hill’s use of the phrase “historic Palestine.” I collected myself and gently corrected him, telling him that Tel Aviv was actually in Israel, not Palestine. He responded by saying that the group he would be going with referred to the land by its “indigenous name.”

As offended as I was, it took me less than 30 minutes to educate him about why erasing Israel felt harmful, for him to respect my opinion and apologize, and for him to stop doing activism with that group.

There is a way to educate black people about Palestine and Israel without accusing them of being genocidal anti-Semites.

It shouldn’t have to be said, but black people are not evil. Most often if they express anti-Israel sentiment, it’s because their support of Palestine is rooted in their deep commitment to justice, which is informed by their own trauma.

For some black and indigenous people who are anti-colonialists, being open about the colonial tactics of Israel is their moral imperative, not something they are doing to attack Jewish people.

If my partner had refused to change his language, he wouldn’t have been advocating for genocide but standing by this principle.

He happened to respect and agree with me in many aspects, but if he hadn’t agreed with me, he would still be a good person and an effective activist.

From what I can tell, he has a spotty track record on this topic — particularly in his claim that Louis Farrakhan may not be an anti-Semite.

I understand why people are upset. I do not ask you to defend or absolve Marc Lamont Hill.

But I do implore you to consider the harm that the Jewish community’s response to Marc Lamont Hill is creating.

Last week, I spoke to a black Jewish woman who lamented the fact that in the aftermath of the Pittsburgh shooting, her community has mostly been obsessing over anti-Semitism in the black and Muslim communities.

The Pittsburgh shooter was a white supremacist, and it made her feel exasperated to see all these brown people take the brunt of the blame for American anti-Semitism.

Of course, she didn’t condone anti-Semitism from black people, but she found the hyperfocus on them to be racist.

Like all non-Jewish people in America, non-Jewish black people can absolutely be anti-Semitic. I am truly exhausted by the litany of examples of black anti-Semitism that I see on my social media timelines. It’s overwhelming. It makes me feel unsafe.

But when the actions of black people are held up as the main existential threat to Judaism today, it reeks of racism. The Jewish community needs to ask itself why it is obsessed with focusing on the problematic comments that black people make.

It is a crucial question.

Increasingly, it seems to many that there is no way that a person of color can strongly criticize Israel and not be considered anti-Semitic.

The only acceptable activism seems to be there one born from respectability politics — which many activists justifiably reject.

Not everyone’s activism looks the same.

Some people are revolutionaries; some people have a personal stake in the issue.

Baldwin’s essay, “Negroes are Anti-Semitic Because They’re Anti-White,” is oft-cited in the Jewish community, but it’s also oft-misunderstood.

It’s frequently used to lend credibility to the idea that black people don’t understand race when it comes to white Jewish people — that they are “mistaken” in grouping their treatment by white Jews in with the way other white people treat them.

But it’s completely valid for black people to be enraged when they are mistreated by white Jewish people.

Yet it’s hard for black people to describe their treatment using terms like “control,” ”manipulation,” “oppression” or “greed” without an outcry about how those terms are rooted in anti-Semitic tropes.

But these are all things that black people experience from white people all the time, whether they’re Jewish or not. Policing their language is completely counterproductive to a goal of unity.

For many black people watching what’s happening to Marc Lamont Hill, it feels all too familiar. Black folk grew up knowing that we had to be twice as good as white people to get half of what white people have.

When people see Marc Lamont Hill being fired for his comments about the freedom of Palestinians, they see a familiar pattern repeating itself.

They see that this world shows them no compassion, gives them no passes and doesn’t accept their excuses.

It hardens them and makes them even more unwilling to work with white Jewish people.

Most black people who are upset don’t feel that “Jews” took Hill’s job, but that white people did by weaponizing Jewish oppression.

I don’t agree with all of Marc Lamont Hill’s statements on Israel and Palestine. But there are more than a few black Jewish people that do, like Rebecca Pierce and Chanda Prescod-Weinstein.

These are questions we all need to ask ourselves.

Right now, the world sees Palestinians being oppressed and identifies with them. This cannot be stopped or prevented, and it shouldn’t be. Israel is a country with its own traumatic past, but it doesn’t change the fact that it’s a developed country with allies, power and resources. With that power comes responsibility, and responsibility means allowing people to criticize your actions.

Yes, Marc Lamont Hill’s criticism was improper, and he faced an extreme consequence for it.

But because of the racism that we’ve allowed to seep into conversations like these, the increasing perception is that there is no right way for people of color to criticize Israel.

These conversations are no longer being conducted in a productive way, and I’m really scared to live in a world like that.