Why Louis Farrakhan Can No Longer Be Excused 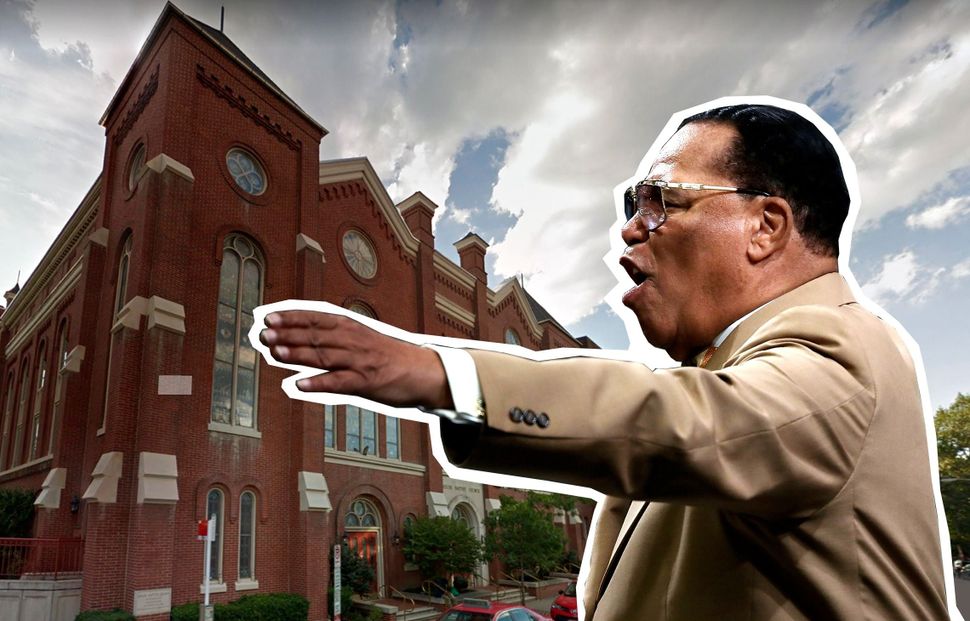 Louis Farrakhan, leader of the Nation of Islam, is an unrepentant bigot. His hatred of, and disdain for, Jews, gay men and lesbians, trans people and white people in general is consistent and unwavering. It forms the basis of his prophecy and his politics, which he will shamelessly preach to anyone who will listen.

Farrakhan is also the aging, fading leader of a black nationalist sect that reached its peak of power two decades ago and has steadily diminished ever since. The Nation of Islam, credited with doing good work in blighted neighborhoods no one else would touch, is now largely irrelevant. Farrakhan is a figment of the past, more the crazy beloved uncle than a force for much of anything.

Well, which is it?

Is he a real and present danger to American democracy in general and to Jews in particular? Is he, as the Anti-Defamation League pronounced a few years ago, the leading anti-Semite in America? Should he be denounced and exiled from all polite company?

Or should his supporters — including those who lead the Women’s March — be forgiven for their lingering affection and admiration for a man whose exhortations of self-improvement and responsibility are far more consequential than his spasms of hate-filled rhetoric?

This 85-year-old throwback, who has been on his deathbed more than once, is like a Phoenix of our racial politics, rising up again and again, making mischief, never really going away but never causing real harm, either.

His act, though, is getting old. America’s expectations for leadership — with a few notable exceptions — have changed dramatically since he first commanded attention, and what once could be excused can no longer be tolerated.

Farrakhan must be exiled from the public stage, stripped of honor and attention. Twitter should suspend him. Members of Congress, as well as other public leaders, should stop defending him. His free speech is his right, but that doesn’t mean we have to listen to him, legitimate him or excuse him.

I say this recognizing both the imaginative hold that Farrakhan retains in African-American communities that were starved of leadership and the challenge that hope provides.

“He is more than those [anti-Semitic] statements, whether we like it or not,” a prominent Muslim activist in Chicago told me. “His movement did some good in those communities where others would not step up. They cleaned up inner-city neighborhoods.”

“That’s not to be discounted because of his problematic views.”

An African-American journalist in Chicago, who didn’t want to be identified, concurred: “I understand the draw, not because of anti-Semitism but because of his message of black uplift.”

Farrakhan still lives in the Kenwood neighborhood on the South Side, still holds his rallies and still leads the Nation of Islam, but its numbers now are in the low tens of thousands. Locals in Chicago told me that his footprint has shrunk dramatically — far from what it was when he emerged as the leader of an angry movement that mixed separatist talk, anti-Semitism and black empowerment and reached its apogee in 1995, with Farrakhan’s keynote speech at the Million Man March.

Now, “he doesn’t have a presence, if you will, in the way he once did,” the journalist said. “You hear him become this lightning rod, but he’s not a figure in the day-to-day black life of Chicago.”

The Nation of Islam isn’t a factor in Jewish life in Chicago, either. Rabbi Frederick Reeves of KAM Isaiah Israel told me that even though he works three blocks from Farrakhan’s house, “I haven’t run into them in any context.”

There is also a good case to be made that Farrakhan’s rhetoric, reprehensible though it is, has not led directly to a surge in black anti-Semitism or in attacks against Jews. As another activist told me, “anti-Semitism is ancillary to the black empowerment messages. For white supremacists, it’s central. It’s an intellectually different category.”

So, I can understand why African Americans and Muslims are resentful for feeling that they have to be held accountable for every publicity-seeking statement Farrakhan makes. As Adam Serwer wrote in March 2018 in The Atlantic:

“Farrakhan says something anti-Semitic, which draws press attention; he is roundly condemned, which draws more press attention, but also causes some black people to feel he is being disproportionately attacked; and the controversy further burnishes his credibility within the black community as someone who is unacceptable to the white establishment and is therefore uncompromised. It is a cycle he has fueled, and benefited from, for decades.”

If that sounds awfully like the vicious cycle repeated by another public figure — the one now in the White House — that’s not a coincidence. Farrakhan may be aligned with some on the political left, but his actual political behavior puts him far closer to Donald Trump, whom he just about endorsed for president. Farrakhan favors undemocratic strongmen (the late Libyan leader Moammar Gadhafi was his financier); rogue nations (Iran), and numerous conspiracy theories (the 9/11 attacks were an inside job; homosexuality was unleashed as a form of castration, etc., etc.) Even radical feminist figures like Angela Davis have denounced Farrakhan for his exclusion of women. He was photographed with a Chicago politician named Barack Obama but came to abhor him as president.

Which is one of the many reasons that I do not understand why those who call themselves “progressive” continue to embrace him.

But the crux of the matter is not what Farrakhan has done in the past; it is how we should regard him now.

“Historically, it is very dangerous when bigotry is explained away and ignored,” said Kenneth S. Stern, now director of the Bard Center for the Study of Hate. “There may be short-term reasons, but in the long term, it is very dangerous. There are legions of historical examples where that can lead.”

Especially today, as incidents of anti-Semitism and other hateful behaviors are becoming more common and deadlier.

Especially today, when men are banished from employment and public acceptance for utterances far more benign than anything we have heard from Farrakhan. Really, if his hateful words can be excused because of the greater good he may have done, why isn’t Al Franken still in the United States Senate? Why isn’t Kevin Hart still hosting next year’s Oscars?

And if Farrakhan has no real stature anymore, why was he onstage at Aretha Franklin’s funeral — just feet away from former president Bill Clinton, greeting mourners with hugs and handshakes — photographed for posterity?

I recognize that in the paradigm of the oppressed versus the oppressors, Farrakhan has stood for the oppressed for decades, and that is why he retains such goodwill. I also recognize that I haven’t benefited from the Nation of Islam’s dedication to securing neighborhoods and promoting empowerment, while others — including some leaders of the Women’s March — have.

But if good people everywhere are willing to call out hate speech and hurtful behavior in politicians and pundits, comedians and corporate titans, then Farrakhan cannot be exempt. If Democrats and many Republicans find President Trump’s bigoted speech unacceptable, then Louis Farrakhan cannot be excused.

“Denouncing the marginalized Farrakhan can seem ridiculous to those who feel like white people put their own Farrakhan in the White House,” Serwer wrote.

Why Louis Farrakhan Can No Longer Be Excused