Jewish Women Should Join Us At The Women’s March, Despite Our Mistakes 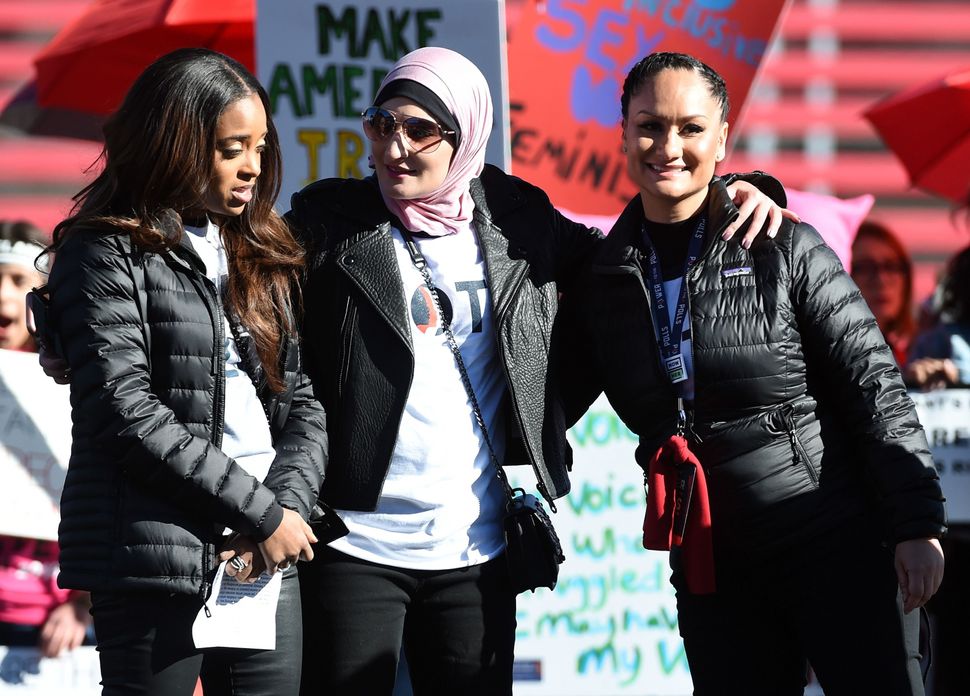 Shirley Chisholm, the first black woman elected to the U.S. Congress in 1968 and the first black candidate on a major party’s presidential ticket in 1972, once famously quipped, “If they don’t give you a seat at the table, bring a folding chair.”

Representing the voices of women that have been marginalized at the decision-making table was our primary motivation as we organized the Women’s March on Washington in 2017.

There were so many communities of women who were looking to the Women’s March to affirm that they would be not be erased: groups like trans women, women who wear hijab, disabled women, and indigenous women. We had to pull up more seats to the table to ensure that all women had their experience of structural discrimination reflected in our movement. This work isn’t easy, and the Women’s Agenda we are proud to release in advance of the 2019 March is a continuation of our efforts to live up to this representative and inclusive goal.

I learned from my mentor, Mr. Harry Belafonte, that the 1963 March on Washington brought on over 500 partners within a year, and so I set that as my goal to achieve within 10 weeks. As I reached out, partners were excited to come on board and wanted to know what we were marching for. I knew that any statement of what we were marching for would have to include the voices of women from a multitude of backgrounds, identities, ages, faiths, statuses, and abilities.

The Principles are written in the affirmative tense — meaning they outline and declare the rights women have, rather than listing and denouncing the many forms of oppression women face, which were on full display in the ugly and hate-filled rhetoric of the 2016 election.

The principles became a historic and visionary document that was the intellectual foundation of the 2017 Women’s March on Washington. In advance of the 2019 march, the principles have been updated to include explicit mention of Jewish women, as well as Latinx women and Asian and Pacific Islander women, in the list of women who are historically excluded from feminism, and to include specific mention of gun violence alongside other forms of violence against women.

As many readers of The Forward will know, the leadership of the Women’s March has come under fire in the past several months over accusations of anti-Semitism. I want to be unequivocal in affirming that the organization failed to act rapid enough to condemn the egregious and hateful statements made by a figure who is not associated with the Women’s March in any way. This failure caused deep hurt and pain, especially because our movement is dedicated to centering inclusiveness.

The March has evolved over the past few months as we humbly acknowledged our failings. I want to be clear: our movement is a safe place for Jewish women, our leadership abhors anti-Semitism and homophobia, and these kinds of comments are and will always be unacceptable. Going forward, we are committed to engaging in courageous conversations that break down the barriers to understanding and building deep relationships that lead us towards the “beloved community” of which Dr. King dreamed for all people. We seek to better our movement each and every day to remain deserving of the support of progressives of all backgrounds.

The next stage of evolution is the Women’s Agenda, a set of federal policy priorities that will form the foundation of the 2019 Women’s March on Washington. This agenda is being created by over 70 organizations and individuals with policy expertise who work with directly impacted groups of women. These women have worked in ten issue-area committees, based on the Unity Principles, to create the first intersectional feminist policy agenda, which will serve as a roadmap for 2019 and beyond.

This is the transformative power of women’s leadership, to engage in the difficult and painful work to ensure that every community has a voice, that criticisms are heard and validated, and that reforms are made decisively that take us forward together. This is why women are the leaders that our nation so direly needs in the moment. Together, our diverse movement will work to realize the first intersectional policy agenda through concrete change in our nation’s laws.

The Women’s Agenda will give clear “marching orders” to every grassroots activist in the nation and establish a solid platform on which truly progressive candidates can run and win in 2020. We hope that The Forward and other progressive publications, advocacy groups, and community organizations will join us in this endeavor to produce a tangible declaration of how we will protect and defend our rights, safety, health and communities.

The 2017 March made a lasting impact on our society because of your participation. Once again, women, femmes and our allies will make history, by coming to D.C. with an agenda for exactly what we want to see in 2020.

Carmen Perez is the Executive Director of the Gathering for Justice, a 501 (c) 3 organization dedicated to criminal justice reform, as well as one of the original co-founders of the Women’s March movement.

Jewish Women Should Join Us At The Women’s March, Despite Our Mistakes