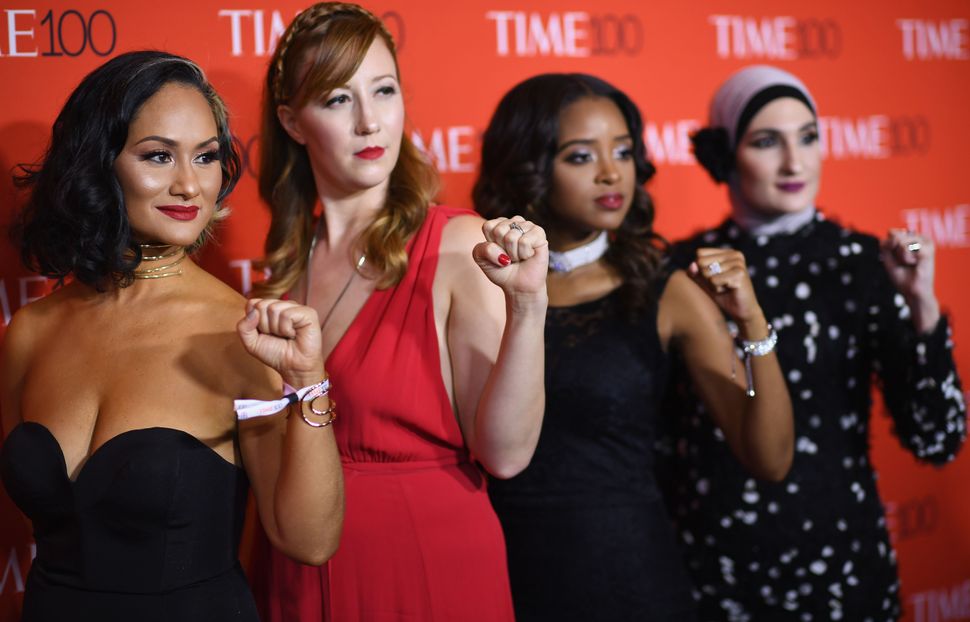 This coming Saturday, thousands of women across America will be marching in the 2019 Women’s March. But unlike the first march, many Jewish women have pledged not to attend this year, thanks to the March leaders’ ties to the anti-Semitic head of Nation of Islam, Louis Farrakhan, and other reports of anti-Jewish sentiment.

Still, social media posts have been circulating across Facebook and Twitter with the hashtag #jwocmarching, for Jewish women of color who are marching. The hashtag is part of a recent campaign led by Yavilah McCoy, a Jewish leader and founder of Ayecha who has been recently added to the Women’s March steering committee. McCoy and others have been urging Jewish representation in next week’s march, and specifically highlighting the voices and experiences of Jewish women of color in this contingency. The campaign released a nuanced, thoughtful statement which clearly outlines why many Jewish women of color are committed to the Women’s March as part of an intersectional struggle of solidarity against oppression.

“As Jewish women of color who live at the intersection of racism, sexism and anti-Semitism, and who are committed to standing against white supremacy, patriarchy and religious oppression in all its forms, we will play an integral role in the healing and unification of our communities and in the work of securing greater justice and freedom for us all,” the petition states.

I read this statement with respect for the experiences that lead its authors to write it. And in some ways, you might expect my identity as an intersectional feminist Latina immigrant from Argentina and a Sephardi Jew whose family hails from Arab lands should lead me to participate in the Women’s March, a movement predicated on solidarity for intersectional oppression and vulnerability.

But it is precisely my intersectional identity that leads me to abstain.

My childhood memories were happy, but still to this day carry a distinctly diasporic taste: Argentina never felt like home.

Maybe it was the many times that my kindergarten was evacuated, due to anti-Semitic vandalism and threats. Maybe it was that my best friend’s dad was one of the 85 murdered in the still unresolved 1994 terrorist bombing of a Jewish institution, the Asociación Mutual Israelita Argentina.

I cannot separate my Latina identity from a feeling of Jewish vulnerability and dispossession, a feeling that I will never belong. The countless sports caps in my home, for my brothers to hide their kippot under, were a daily reminder of otherness.

It’s a reminder that North American Jews have been largely privileged to not have.

When I married my husband Sion, I was welcomed into a family and community which bears other burdens of Sephardic memory. His parents were born and raised in Egypt and became stateless refugees under Nasser’s anti-Semitic regime in the 1960s.

Their stories are now my own and inform a consciousness that carries the dreams and nightmares of hundreds of thousands of Jews from Arab lands, known in Israel as Mizrahi Jews, whose lives were uprooted and shaped by nationalistic Arab anti-Semitism.

These memories became more deeply imprinted in my psyche through my doctoral research of Syrian Jews in America. Prior to my research, I had little familiarity with the thousands of Syrian Jews held as virtual prisoners by the Syrian regime for decades, subject to persecution and oppression, finally allowed to freely leave their country between 1992 and 1994. My interviews and conversations with Syrian Jewish refugees have transformed my understanding of anti-Semitism.

I share these stories because I believe personal reflections can help us scale back the “empathy walls,” as sociologist Arlie Hochschild writes, that prevent us from understanding each other.

I write to help explain why I am not marching, why my identity, which otherwise fits in within the intersectional fight for common liberation and for women’s rights, informs my refusal to participate in a movement led by individuals who have contributed to the normalization of anti-Semitic discourse, and who have yet, despite recent apologies, to regain the trust of many in the Jewish community in this issue, myself included.

I write to add my voice to the mix, to the Jewish women in America who are not white, who represent marginalized minorities, who have accents, who are immigrants, who embody multiple narratives of otherness.

I write to express that there are feminist Jewish women, Jews of color, Hispanic Jews, Jewish immigrants, Mizrahi Jews, Sephardic Jews, Jews from Arab lands and others Jews with intersectional and marginalized identities who are making a conscientious choice to not join in the Women’s March, a decision partly informed by their own experiences of vulnerability and motivated by a determination to fight oppression through other means.

My commitment to upholding anti-Semitism as a moral red line which determines who I will partner with was not awakened, as it was for some American Jews, by the terrible attack in Pittsburgh. While the shooting at Tree of Life synagogue stands out as the most deadly anti-Semitic attack on American soil, observers attuned to the experiences of other, smaller, Jewish communities around the world know that the post-Holocaust resurgence of anti-Semitism (if it ever went away) has older, more pervasive and more complex global manifestations.

My political understanding of liberatory intersectionality includes not only Americans who suffer gender, racial, economic and other forms of inequalities, but also Jews around the world still facing one of the oldest forms of hatred that human history has witnessed.

I write this, then, to challenge the dichotomy that has already begun to emerge, a dichotomy that posits an “either/or” worldview in which individuals who refuse to march in this particular Women’s Movement are portrayed as not caring for social or racial justice.

I care. It is because I care that I am praying with my feet and marching away from the Women’s March.

Dr. Mijal Bitton is a Fellow in Residence at the Shalom Hartman Institute of North America, a Social Scientist of American Jews and the Rosh Kehilla of the Downtown Minyan.