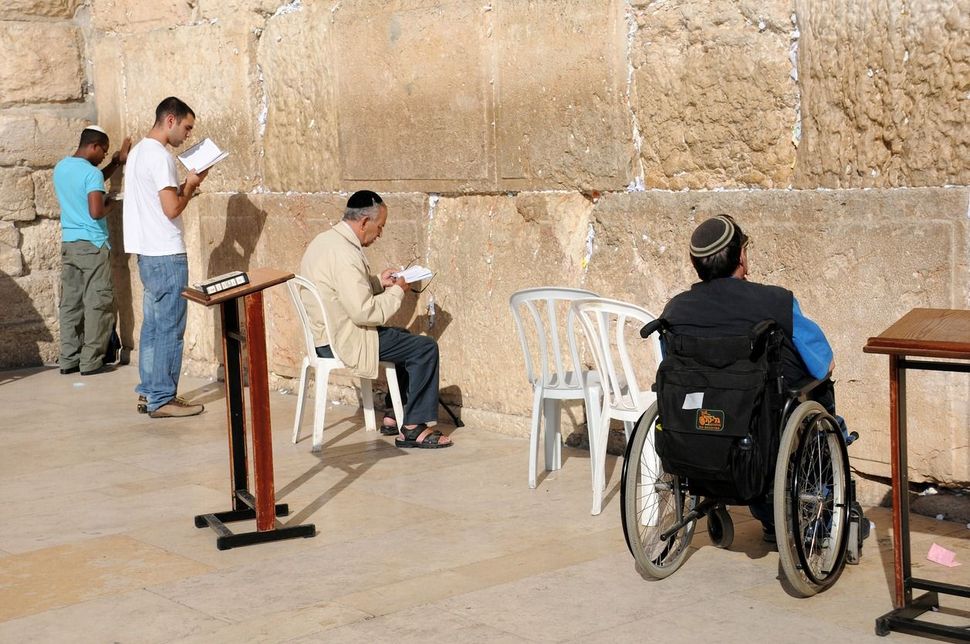 Navigating a wheelchair through the ancient streets of Jerusalem is easier now, after renovations. Image by iStock

It’s staying lighter later, warmer and brighter, people are being kind to one another and doing good work. Here are just a few good news stories from the Jewish world this week.

Jerusalem, city of gold: The ancient cobblestones and narrow alleys in the Old City of Jerusalem have been renovated in areas that are heavily-trafficked by tourists, the Times of Israel reports, in an effort to welcome visitors who use wheelchairs. 90 percent of streets in the Old City’s Muslim, Armenian and Christian quarters have been smoothed and adjusted to include ramps and handrails in a project that has been in planning for over a decade. The Roman-era construction will now be complimented by a free accessibility app, which can be programed for eight different languages.

B the mitzvah you want to see in the world: Rabbis and congregations are adjusting traditional bar and bat mitzvah ceremonies for celebrants whose genders do not fit traditional binaries. “B Mitzvahs” take the gender focus out of the sacred experience and keep the focus on the holy. Brooklyn is, of course, leading the charge, the New York Times reports, welcoming non-binary and gender-fluid young Jews to the covenant. But those leading the change believe it is inevitable, across denominations. Daniel Bahner, of the Jewish LGBTQ inclusion group Keshet, says he gets monthly emails from rabbis asking about b mitzvahs. Not for nothing has Judaism existed for thousands of years — it’s a little thing called evolution, folks.

BDS backfire: An attempt by a Dutch activist to boycott wine made in Efrat, Israel resulted in Israeli wine selling out at liquor stores throughout the country. “Hey, Hema,” Mieke Zagt tweeted at a Dutch wine chain, “You’re selling Efrat wine from Judean Hills [as] made in Israel. Is this possible? Efrat and Judean Hills are in occupied Palestinian land. Efrat is an illegal Israeli colony. Can you verify the origin?”

It’s true that Efrat is an Israeli settlement in the West Bank, but the Efrat Winery is not — it’s a historic Israeli winery inside the green line. Within hours of the tweet, the Times of Israel reports, Hema, a chain with 525 stores, was sold out of Efrat wine online, with bottles in stores going fast. Dutch twitter was clogged with pictures of people drinking Efrat wine. L’chaim!

Merchant of feminists: Amidst a seemingly endless torrent of anti-Semitism in Britain, a Jewish woman will play the iconic role of Shylock in the “Merchant of Venice.” Tracy Ann Oberman told the Guardian that she’ll be basing her portrayal off her grandmother. “Women like her were tough as nails and so I pictured Shylock as a matriarch like that,” she said. “The 1930s was a very difficult time to be Jewish, to be working-class and to be a woman.” When she’s not on stage, you can find Oberman campaigning against Labour anti-Semitism and starting a new podcast called “Trolled.”

Tokin’ Seth Rogen: Like a dream, beloved Jewish comedian Seth Rogen and best friend Evan Goldberg have launched a company that will sell marijuana in Canada. The goals of “Houseplant,” a joint-venture in the works for five years, are to promote education and “make it easier for people to learn to love cannabis.” True to his brand, Rogen, of movies like “Super Bad” and “Pineapple Express,” hopes the Canadian retailer will express the years of “first-hand experience and respect we have for cannabis.”

Torah: This week’s parsha, Shemini, isn’t happy — it’s tragic. It begins with Moses, Aaron, and two of Aaron’s sons performing a massive ritual sacrifice to God. All goes as planned. But then in the second act, Nadav and Avihu, Aaron’s sons, offer another sacrifice. It’s a “strange fire,” and it wasn’t commanded by God. The two boys are consumed in fire. Afterwards, Moses goes to Aaron, his brother, offering something between a defense and consolation. “Aaron was silent,” the Torah tells us.

What are we supposed to make of this? Do we always have to find some lesson, some silver lining, in loss? In the loss of children before parents? We can, and we also don’t have to. We can interpret Aaron’s response as a silent protest. As they journey across the desert, Moses, Aaron, and Miriam experience monumental loss. Moses gets angry. Miriam grumbles. And in this case, Aaron is silent. There’s strength in that, in a document that is obsessed with words. It’s not good news, but it is comforting, to find something so familiar in a holy text — a parent offering a silent protest against loss.