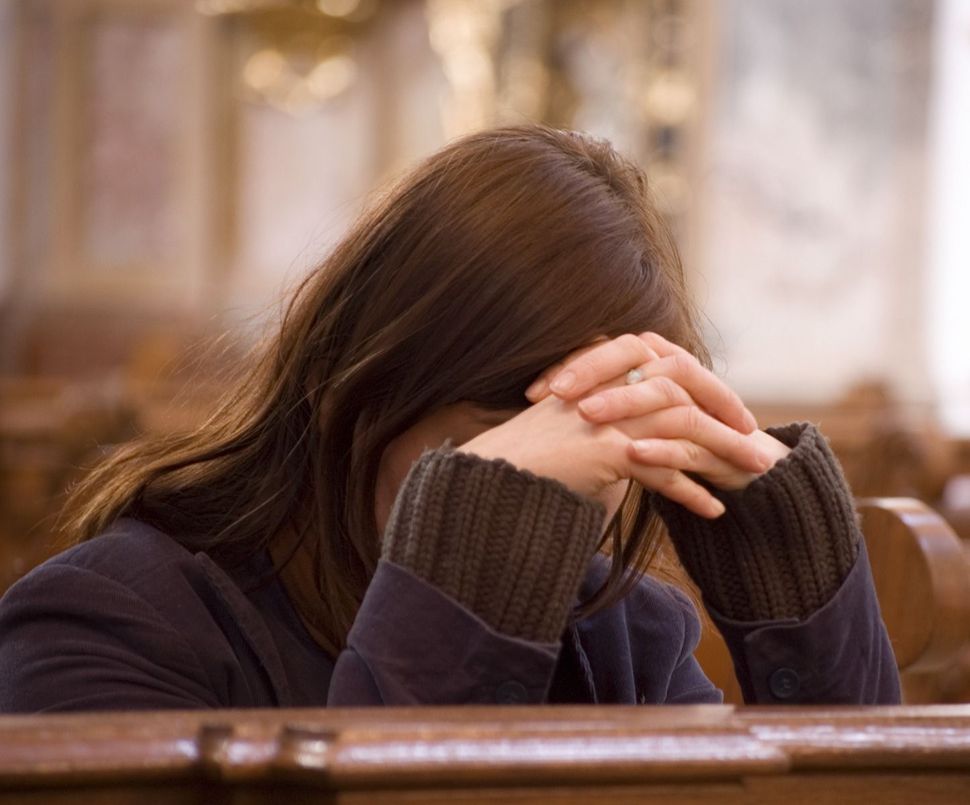 One Yom Kippur not so long ago, I was in too much pain to stand at Ne’ilah, the closing service. I was sitting near the back of the synagogue sanctuary, holding back tears. Looking around, it seemed that even the most frail of the elderly congregants — people who relied heavily on mobility devices like canes and walkers — were on their feet for those final fervent moments of prayer. But there I was, a woman in her twenties, outwardly healthy-looking, remaining in my chair. Would my community think I was lazy? Entitled? Irreverent?

I didn’t know it yet, but the pain that kept me in my seat that year was a symptom of the chronic illness I would be diagnosed with a few years later called ankylosing spondylitis. Ankylosing spondylitis, part of a family of diseases known as seronegative spondyloarthritis, or axial spondyloarthritis, is a form of inflammatory arthritis that primarily affects the spine and sacroiliac joints — the place where the base of the spine meets the pelvis — but can also involve other joints, like fingers and toes, and even the jaw. It’s a systemic condition, and so people with A.S. often experience other disabling symptoms like debilitating fatigue and cognitive dysfunction, also known as brain fog. Unlike rheumatoid arthritis, there is no diagnostic blood test, so many people with A.S. report delays in diagnosis of five to eight years from when they experienced their first symptoms.

I began to show signs of this condition early in my teens. I went from one swollen joint to another and suffered from repeated hip “injuries”. 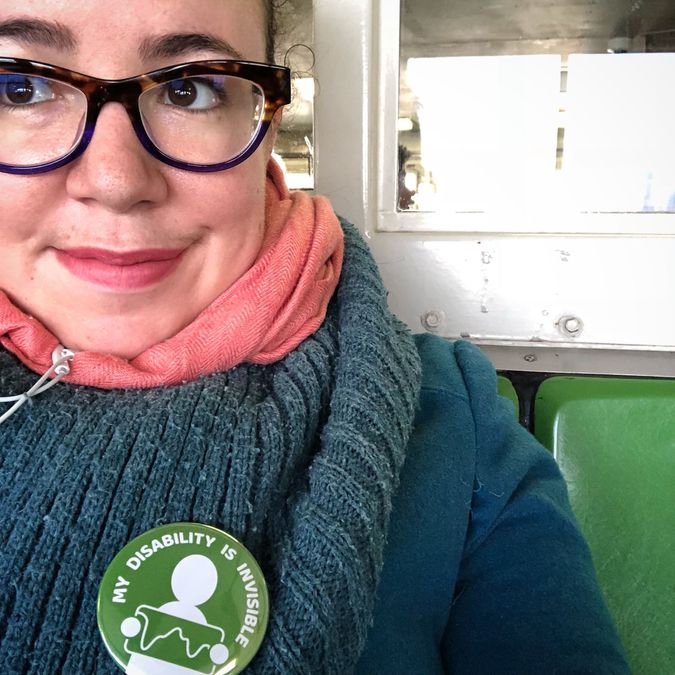 In my 20s, it became a joke amongst my friends that I was a “pharmacy,” since I always carried a bottle of muscle relaxants in my bag, which I took with alarming frequency — so often, in fact, that I no longer experienced any drowsiness from them. I would pick up a physical activity — dance class, riding my bike — only to find that it would result in random aches and pains that grew harder and harder to recover from. Eventually, I surmised that I had simply injured my hip one too many times and would likely always have to tread gingerly lest I tweak something again.

Doctors and physiotherapists had told me, after all, that it was just a repetitive strain injury and the lingering effects of an ankle sprain. And so, I did my best to push the pain aside and get on with life, though deep down, I always felt that there was something wrong.

The rabbis of the Talmud understood that a person is in the best position to judge his or her own health. We read, in the context of exemption from fasting on Yom Kippur:

“It was taught in the mishna: If a person is ill and requires food due to potential danger, one feeds him according to the advice of medical experts. Rabbi Yannai said: If an ill person says he needs to eat, and a doctor says he does not need to eat, one listens to the ill person. What is the reason for this halakha? It is because the verse states: “The heart knows the bitterness of its soul” (Proverbs 14:10), meaning an ill person knows the intensity of his pain and weakness, and doctors cannot say otherwise.” (Babylonian Talmud, Tractate Yoma 83a)

And yet, for many with chronic illness, the experience is quite the opposite. Without a diagnosis, they make do, trying to avoid symptoms, perhaps feeling exposed and insecure, just as I was that Yom Kippur.

It would be a full twenty years from those first symptoms before I finally got an answer to why, for most of my life, I had this nagging feeling that there was something wrong.

It all came to a head one weekend in June 2016, when finally, my body had enough and I found myself sitting in my primary care physician’s office in tears. In the almost ten years she had been seeing me as a patient, this was the first time she had seen me cry.

I left with a referral to a rheumatologist, who would be the one to make the definitive diagnosis once an MRI confirmed her suspicion. Together, we began a process of experimenting with treatments to keep the day-to-day pain and stiffness to a minimum and lessen the frequency of flare ups.

Six medication combinations later, we have a winner — for now.

My personal journey with chronic illness has taken place against the backdrop of the Jewish community. In it, I have found friendship and support.

And yet, I have also felt misunderstood and alienated, often at those moments when I had hoped that our tradition would provide solace or guidance.

Take, for instance, the Mi Shebeirach prayer, recited at each Torah service. Its conclusion is a prayer for Refuah Shlemah — a full recovery:

“The One will send him/her, speedily, a complete healing — healing of the soul and healing of the body — along with all the ill, among the people of Israel and all humankind, soon, speedily, without delay, and let us all say: Amen!”

Even the modern version used in many Reform congregations, penned by the late Debbie Friedman z”l, invokes similar wishes: “Bless those in need of healing with Refuah Sh’lemah / The renewal of body, the renewal of spirit / And let us say amen.”

We pray that those who are sick will get better. And not just get better, but be healed speedily and fully. But for people like me, who live with conditions that can only ever be managed, there is no healing; there is only maintenance.

Our tradition echoes the way that we are conditioned to understand illness: One is sick, or one is well. When one is sick, one either recovers, or one succumbs to one’s condition. Chronic illness simply does not fit this mold.

As Rabbi Elliot Kukla writes of his own experience with chronic illness, “Like most of us, I had been raised to see illness as something temporary: a stopover on the way to recovery or to death, not a place to live… But sometimes, sick people just stay sick. And there’s no meditation, medication, positive outlook, exercise or smoothie that can fix it… Eventually, I stopped hoping to be well, or even pretending that I lived in that future-heavy land of hope anymore.”

As we have grown to prioritize inclusion as a community, we have taken great pains to find prooftexts in our tradition, whether reminding us that all people –- even those who are chronically ill or disabled –- are created b’tzelem Elohim — in the image of God, or pointing to the passage in Leviticus, “You shall not insult the deaf, or place a stumbling block before the blind. You shall fear your God: I am the LORD.”

And yet, when our prayers, our personal petitions and private moments of reflection, reassert that sickness is only contrasted with health, and that we should hope to be fully healed, it can be alienating for those of us who live with conditions from which we can never recover.

As a growing share of the population lives with at least one chronic illness, it is incumbent on us to find new ways to talk about it that are affirming of our lived reality. We must develop language that does not create a binary between sickness and heath, but that provides appropriate ways to talk to and about those of us for whom our condition is not simply a stop on the road somewhere between recovery and death, but our dwelling place. We must encourage our communities to know their own bodies — their abilities and limitations — especially in the choreography of our prayer services.

And above all, we must embody the wisdom of our Talmudic sages, who taught:

“The Gemara asks: It is obvious that a person knows himself better than anyone else does. Why does this need to be stated explicitly? The Gemara answers: It is lest you say that the doctor is more certain because he has had more experience with this condition. Therefore, the verse teaches us that even so, it is the ill person who knows his own suffering better than anyone else.” (Babylonian Talmud, Tractate Yoma 83a)