While You Celebrate Eurovision, Don’t Forget Us Palestinians Who Can’t 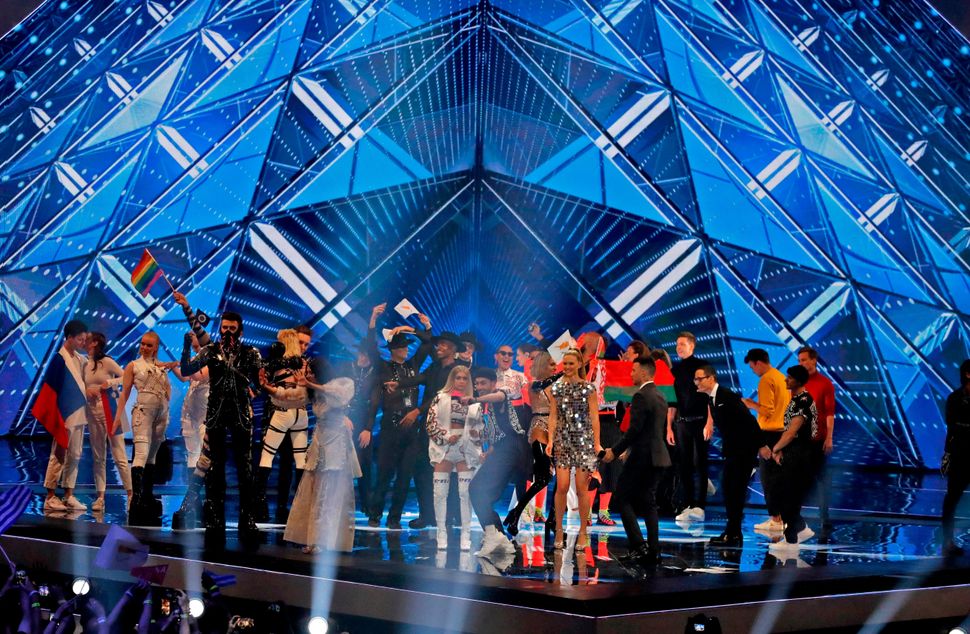 Ah, the Eurovision contest — that time when so many countries come together in a show of playful competition and unity. It’s Gaza’s cries that the Eurovision songs are competing with.

Great effort went into Israel’s preparations to have a perfect Eurovision celebration. Hotels had large discounts to attract visitors, while bars, clubs and restaurants hotly anticipated swarms of enthusiastic customers eager for an authentic impression of life in Tel-Aviv. 8,000 policemen were deployed, along with hundreds of volunteers, ushers, guides and journalists to guarantee a hospitable experience for some 5,000 excepted tourists and delegations from 41 countries.

Unfortunately, this widely promoted banquet, which is marketed for everyone, is closed to me and my people. The hospitable and welcoming face of Tel Aviv so widely advertised is extended to virtually everyone except for the Palestinian co-inhabitants of this land.

In this festival, we won’t be present amongst the crowds. We won’t hear Madonna’s calls for “peace and human rights.” We won’t enjoy the supposedly inclusive, diverse and friendly spirit of the Eurovision or the sunny beaches of Tel-Aviv.

We simply aren’t welcomed there; our identity as Palestinians might disturb the peaceful togetherness of the event. We might intrude on all the kumbaya coming together with our cries for life, freedom and dignity.

This is our every day’s life. I, as an average Palestinian from Gaza, am never allowed to see Israel, regardless of what the visit’s purpose is. We are kept from our homeland, from even visiting.

Worse, we are disenfranchised from exercising the most fundamental right — the right to citizenship in the state that controls every aspect of our lives.

And also aren’t allowed an opportunity like Israel’s to exhibit our passion for life, beauty and art to the world. For Israel doesn’t allow foreigners into the Gaza Strip to visit and see its two million inhabitants.

To add insult to injury, few months ago, the IDF bombed Gaza’s oldest cultural hub, the Al-Meshal center for music, dance and theater. A few days before this incident, an Israeli court sentenced the Palestinian poet, Dareen Tatour, to five months of imprisonment for “inciting terrorism.”

But today’s the day!

Today, the beauty of Israel will be selectively displayed. Don’t be fooled: It’s a beauty that is essentially constructed out of our suffering.

Israel keeps thriving and expanding while our land keeps shrinking, our livelihoods obliterated. The pile of brutalities beneath this façade have again been swept under the carpet until the festival is over.

That sweeping wasn’t easy. Last week, the Israeli military – at Netanyahu’s request – pounded Gaza with airstrikes, destroying hundreds of civilian homes to make sure its slowly-dying, beleaguered inhabitants wouldn’t make any noise during the event. And Netanyahu passed on another $30 million in Qatari cash to Hamas, so that it polices Israel’s siege well until the party’s over.

This is the backdrop of the Eurovision that Palestinians have to watch — if we have electricity in the first place. Loud music, a privileged and insensitive crowd dancing and celebrating in a colorful city while purposefully choosing to remain oblivious to Gaza’s impoverishment and immiseration.

A crowd basking in the love of life while we’re deprived of ours.

But why does it have to be like this!

What could go wrong if Palestinians are at last treated as equal humans? If our pain was recognized and addressed instead of whitewashed and pushed to the background behind the Eurovision stage?

Just imagine what today’s Eurovision would have looked like if the humanity of Palestinians was respected, and we stood among the crowds cheering for life, instead of struggling to escape death. Instead of hoping to bury Palestinian suffering beneath the Eurovision stage, today’s event should be a strong reminder of the greater potentials that genuine peace would bring about to both the Israeli and Palestinian populations, and the resulting safety, prosperity and embrace by the entire world of Israel as true land of diversity.

While You Celebrate Eurovision, Don’t Forget Us Palestinians Who Can’t