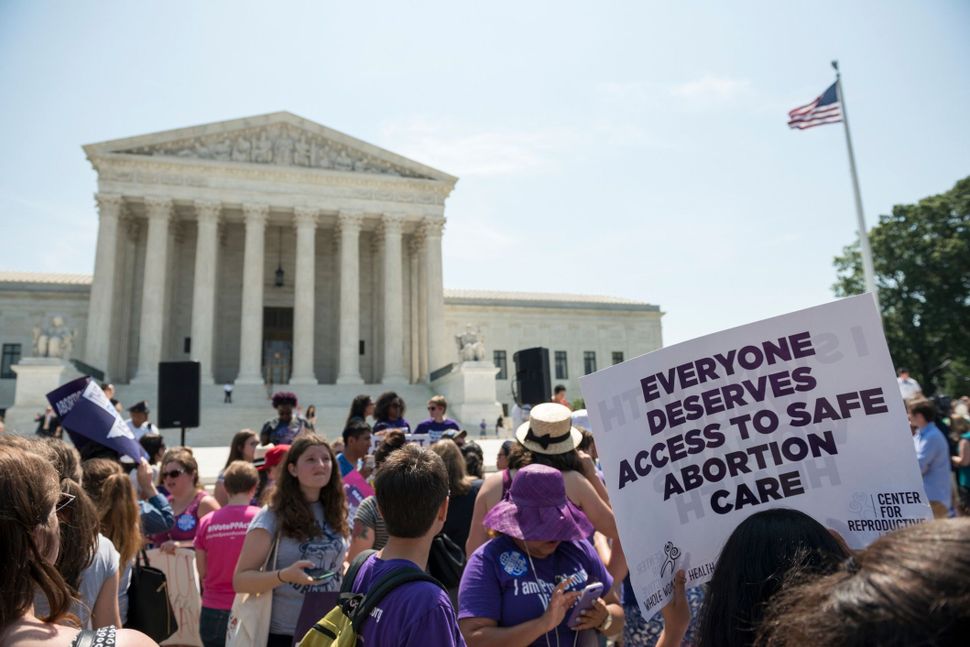 In enacting a law that would make performing virtually all abortions a crime, the state of Alabama is impinging on my religious freedom as a Jew.

So are at least half a dozen other states which are attempting to seriously restrict access to abortion, or ban it altogether in a naked attempt to overturn Roe v. Wade.

For too long, those opposed to Roe and other constitutionally guaranteed reproductive rights have claimed the banner of religious freedom and wrapped it around themselves tightly, insisting that their belief that life begins at conception is biblically based and morally irrefutable.

They are entitled to their beliefs.

But I’m entitled to mine. It’s time that likeminded Jews, and other likeminded people of faith, claim that banner, too — because our religious rights are just as important as those of the 40% minority of Americans who believe that abortion should be illegal.

In the Jewish tradition I ascribe to, the law says that life does not begin at conception, nor does it legally consider the fetus to be a full person deserving of same protections accorded human beings. As the website My Jewish Learning explains:

“Sources in the Talmud indicate that prior to 40 days of gestation, the fetus has an even more limited legal status, with one Talmudic authority asserting that prior to 40 days the fetus is “mere water.” Elsewhere, the Talmud indicates that the ancient rabbis regarded a fetus as part of its mother throughout the pregnancy, dependent fully on her for its life — a view that echoes the position that women should be free to make decisions concerning their own bodies.”

This does not mean that Jewish law uniformly permits abortion under any circumstances. Nor does Roe, for that matter — the landmark 1973 Supreme Court ruling creates a sliding scale of rights, acknowledging that as the fetus grows in the womb closer to viability, its rights begin to supersede that of the mother’s.

I have long regarded Roe as, literally, a supreme compromise, a brilliant balancing act in its recognition that abortion is not just another medical procedure but a complex moral decision as well. It is rooted in the 14th Amendment’s guarantee of the right to privacy, but I’m beginning to think that we also ought to consider it in the framework of the First Amendment’s right to religious freedom. Because my religion does not only allow abortion in some cases — it compels the termination of a pregnancy if the mother’s life is imperiled.

How the mother’s health is defined is controversial, and differs among rabbinic sources and denominations. In general, Reform and Conservative Judaism oppose abortion “on demand” while allowing a woman to terminate a pregnancy if she is suffering from serious physical or psychological threats, or when the fetus is judged to be severely defective.

Orthodox rabbis express a more restrictive approach, but there is no uniform ban and the tradition allows for a surprising and compassionate flexibility.

This was vividly portrayed in the superb project published in The Forward last year by Avital Chizhik-Goldschmidt, who collected stories of Orthodox women who have had abortions. Their experiences are shaped by the legal complexity of rabbinic teachings, and by the shame many feel in their socially conservative communities. Yet they also were supported, and in some cases, encouraged by sensitive, trustworthy rabbis.

Said one of the women: ”Our rabbi was amazing. He sat with us. He told us of a personal loss that he has never discussed with anyone. We all cried. He was sensitive and respectful, and he did not try to throw any agenda or ruling onto us. His wife followed up with support and meals delivered to our home.”

In Alabama, this is now a crime.

Why don’t more progressive and moderate religious groups employ faith-based language to protect abortion rights? There are some who do — the Religious Coalition for Reproductive Rights represents an array of interfaith leaders nationally and in many state chapters. But their voices tend to be drowned out by the Catholic Church and Protestant evangelicals who have particular political sway in the mostly Southern states where abortion rights are most restricted. And, of course, with a newly pious president who is so late to the cause that it would be laughable if it were not so dangerous.

Writing recently in The Atlantic, Stephanie Russell-Kraft noted that many pro-choice groups seem loathe to use religious language and arguments, lest they alienate more secular allies. This strikes me as unnecessarily timid and counterproductive.

Those who wish to ensure that a woman be allowed to follow her conscience — and her religion — ought to embrace every sound argument to make their case. Consider that in Israel, where the Orthodox rabbinate has inordinate power, abortion is legal and often paid for by the state. How’s that for Judeo-Christian values?

Jane Eisner is the Forward’s writer-at-large. Contact her at jane@jeisner.com.