Abortion Extremists – On Both Sides – Are Overplaying Their Hands 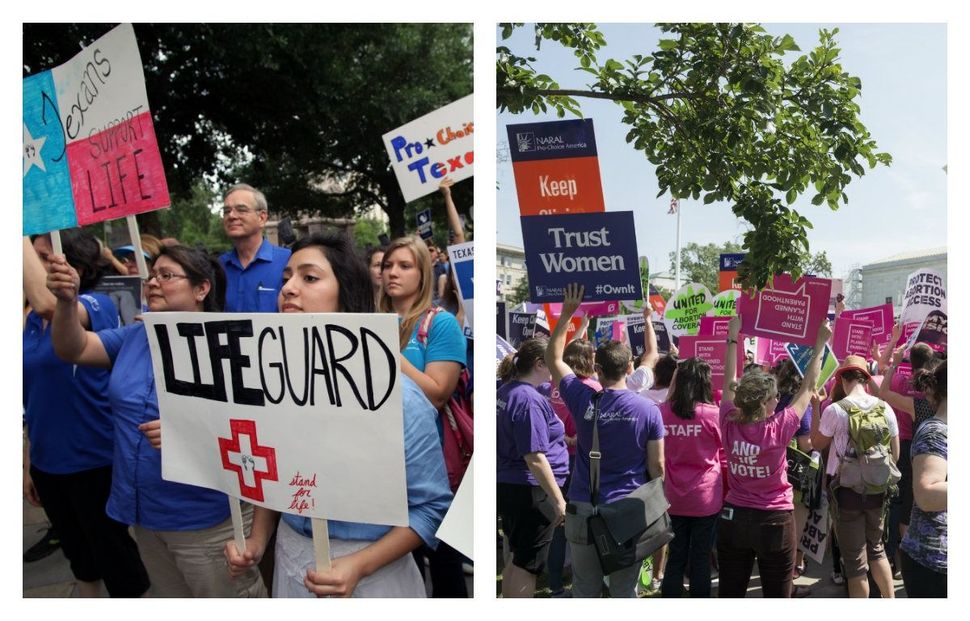 There are few issues more polarizing in America than abortion. Few issues split Americans so perfectly and so consistently and down the middle: [About] (https://news.gallup.com/poll/235445/abortion-attitudes-remain-closely-divided.aspx) half of Americans consider themselves” pro-life,” while the other half consider themselves “pro-choice.” In fact, it’s exactly 48% on each side, according to Gallup polls.

But these categories are not as cut in stone as they might at first appear. Polling also shows that while six in 10 Americans believe abortion should be legal in the first trimester, that support plummets for the second and third trimesters. “Support drops by about half, to 28%, for abortions conducted in the second three months, and by half again, to 13%, in the final three months,” Gallup found in June of 2018.

You wouldn’t know that this nuance exists to hear Democrats – and Republicans – talk about abortion. Over the last year, both sides of the abortion debate have drastically overplayed their hands, assuming extremist positions radically at odds with how the vast majority of Americans feel about abortion. And in so doing, both sides are complicit in proposing misguided and flawed legislation – on both ends of the spectrum.

On the pro-choice side, it has become standard for Democratic and progressive politicians and activists to support abortion up until the moment of birth and even after. As Virginia Governor Ralph Northam infamously put it discussing third trimester abortions, “The infant would be delivered. The infant would be kept comfortable. The infant would be resuscitated if that’s what the mother and the family desired, and then a discussion would ensue between the physicians and the mother.”

He’s not alone. Consider that on the campaign trail, Democrat Beto O’Rourke came out in favor of late-term abortions as well.

The laws surrounding abortion differ by state. Eighteen states limit abortion at the point of viability, traditionally seen as 24 weeks gestation. And seven additional states have no bans whatsoever. But in numerous states, including New York, Virginia, Rhode Island and Vermont, more liberal abortion laws have been proposed, and in the case of New York, passed. Abortion used to be legal only for the first 24 weeks of pregnancy in New York, and after only if the woman’s life were at risk. Now, the newly enacted Reproductive Health Act, passed in January, makes it legal for a woman to get an abortion after 24 weeks.

This new law horrified the pro-life community for allowing abortions at a time when the fetus is clearly already in the realm of being a person. Pro-choice activists consistently claim that no woman would ever make this choice without a clear medical need.

But this flies in the face of research conducted by the Planned Parenthood-affiliated Guttmacher Institute, which found that while information on why women typically seek late-term abortions is scarce, “data suggest that most women seeking later terminations are not doing so for reasons of fetal anomaly or life endangerment.” (As I write this, I’m plagued by Google ads for a local abortion clinic offering abortions up to 36-weeks.)

The left has clearly gone overboard, enabling women to terminate pregnancies at a stage when fetal personhood is assured.

Even for prominent pro-life individuals like myself, editor of the Resurgent Erick Erickson, House Minority Leader Kevin McCarthy, Bloomberg’s Ramesh Ponnuru and Fox News and Townhall commentator Guy Benson, the removal of the rape and incest exceptions is a bridge too far. While I am personally of the belief that life begins with the start of a heartbeat, I agree with Ponnuru that incrementalism is a better strategy to build a culture more open and accepting of pro-life beliefs.

In short, the Alabama law is too much, too fast. Indeed, that was its point. For many pro-life advocates, the law isn’t about changing minds; it’s about revenge. A status update from a pro-life activist friend on Facebook crystalized this point nicely: “To everyone gasping over the Missouri and Alabama laws, this is what happens when politicians in New York, Virginia and other places decide to enact extremist laws that do little to protect the innocent. This is the response.”

Both the pro-choice and pro-life sides have set their flags down on the most extreme cases of abortion. Only one percent of abortions happen after the 20-week gestation mark of pregnancy, and less than one percent of abortions are due to the rape or molestation of the mother. The vast majority of Americans are uncomfortable with both extreme positions. And yet, the pro-choice and pro-life sides, respectively, are turning these polar extremes into the hills they want to die on.

The decision by both sides to stake out positions on extreme opposite ends isn’t how public policy is formed, nor how public opinion is shaped. But it’s clear that neither the pro-choice side nor the pro-life side is interested in either or in dialogue, but instead an all-out war with the other side.

Bad faith accusations are rampant, and in the end, the needle on public opinion won’t move, and few laws will likely change after the courts become involved.

This renewed abortion conversation ultimately won’t achieve anything but further polarization, all the while women and their babies in need of this focus will continue to be caught in the cross-fire.

Abortion Extremists – On Both Sides – Are Overplaying Their Hands