Our Schools Are More Segregated – And More Discriminatory – Than Ever 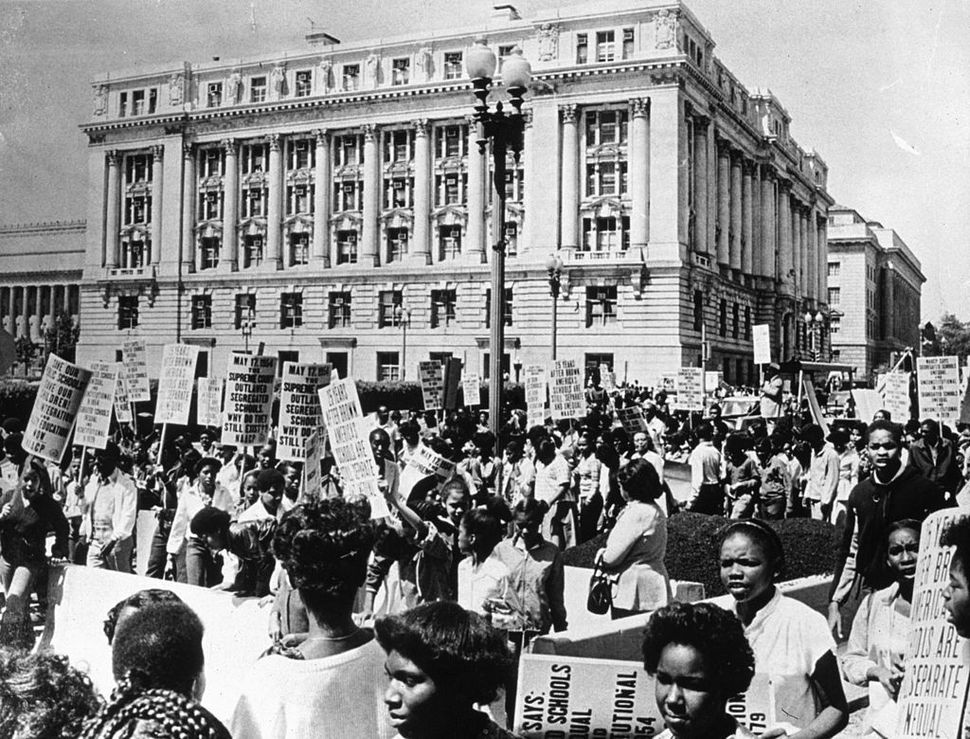 1979: A crowd demonstrating on the twenty fifth anniversary of the Brown vs Board of Education ruling which declared that segregation in public schools was unconstitutional. (Photo by MPI/Getty Images) Image by Getty Images

This past February, an 11-year-old Black child who was arrested at his school in Lakeland, Florida for choosing to sit quietly during the Pledge of Allegiance.

You read that right.

While it wasn’t the first time the student had sat for the Pledge, the substitute teacher leading the class that day took particular offense. Rather than use it as a moment for learning and useful historical dialogue, steps were taken to ruin his life before he had even reached high school.

This wasn’t just an instance of #SittingWhileBlack. For many white teachers of Black children, a real or imagined sign of disrespect can become an opportunity for insult, incitement and, tragically for a child, incarceration.

So why aren’t we talking about it? When education comes up in election cycles, we tend to focus most on college student loan debt, or increases in teacher salary as the ultimate solution, erasing the systematic discrimination against Black children. So it’s no surprise that this discrimination is increasing.

In a recent survey of school systems, administrators, teachers and school support specialists reported an alarming increase in disruptive behavior. The survey also found that most schools don’t have any protocol in place for managing student disruptions. The vast majority of educators identified “an alarming increase in behavioral disruptions” in early grades over the last three years.

The survey credited many potential factors as contributing to the rise in disruptions, including a history of trauma, the Great Recession, more screen time resulting in less physical activity, and increases in substance abuse and mental health diagnoses.

The survey and its respondents did not address was race. The role of race in how these disruptions are perceived, and the percentage of students that educators decide are “disruptive,” is the elephant in the room. Unasked in the survey is a key question: How are schools treating — or rather, mistreating — their Black and Brown students — and how is that treatment affecting those student outcomes?

It’s a crucial question as we observe this 65th Anniversary year of the landmark Brown v. Board of Education Supreme Court decision.

Though we no longer have legally segregated schools, our public schools are actually getting more segregated, not less. And with dangerous trends such as the school-to-prison pipeline, it’s crucial that we look at the ways teachers might be engaging in discriminatory discipline, even unconsciously.

They are being discriminated against and denied an education. Black students are pushed out of schools through suspension and expulsion at three times the rate of their White counterparts.

According to the Justice Policy Institute, nearly 70,000 students were arrested during the 2013-2014 school year, with Black students disproportionately taken into custody in 43 states. “The main variable is the presence of School Resource Officers,” the report found. “Black students are statistically more likely to attend a school with an SRO on campus. The presence of SRO’s effectively turns the school-to-prison pipeline into a direct channel – especially for Black students. And once an individual is caught in the criminal justice system, the odds of attaining stability become much slimmer.

Perhaps as bad as being discriminated against and denied an education, being pushed out of classrooms has consequences that extend well beyond the incident itself. In fact, the consequences of suspensions and expulsions can have lifelong and intergenerational effects. During their absence from school, suspended and expelled students are more than twice as likely to face arrest. Within the following year, they are three times as likely to become involved with the juvenile justice system. And in the long term, they are far less likely to graduate with a high school diploma.

The lack of a nationwide K-12 conversation about race exacerbates this. When education comes up in election cycles, we tend to focus most on college student loan debt or increases in teacher salary as the ultimate solution. But we are desperately in need of new models that recapture disenfranchised Black and Brown students who have suffered from repressive K-12 systems.

And in the meantime, there is absolutely nothing on the federal level to protect students from teachers, administrators and police officers who abuse their authority by criminalizing children for not being White children. Increasingly, School Resource Officers are being called in to arrest students for violations that they would have previously gone to the principal’s office for. Increasingly, like in the case of the student in Florida described above, students are being arrested for “disrupting the classroom” – especially when they are Black.

We are desperately in need of new models that recapture disenfranchised Black and Brown students who have suffered from repressive K-12 systems. One innovative model is the individualized learning or micro-tailored approach deployed by publicly-funded school networks such as California-based Learn4Life. With a focus on economically distressed or disadvantaged students (particularly those who’ve been terrorized by the school-to-prison pipeline in public schools), the model designs curriculum around the student, keeping in mind their diverse perspectives and circumstances.

Unless we protect our children from being pushed out of classrooms and pushed into jails because of it, we will suffer the social costs of a next generation arrested for nothing more than sitting in a classroom.

Our Schools Are More Segregated – And More Discriminatory – Than Ever