A Protest to Leaders Of the Ashkenazi Community in Mexico 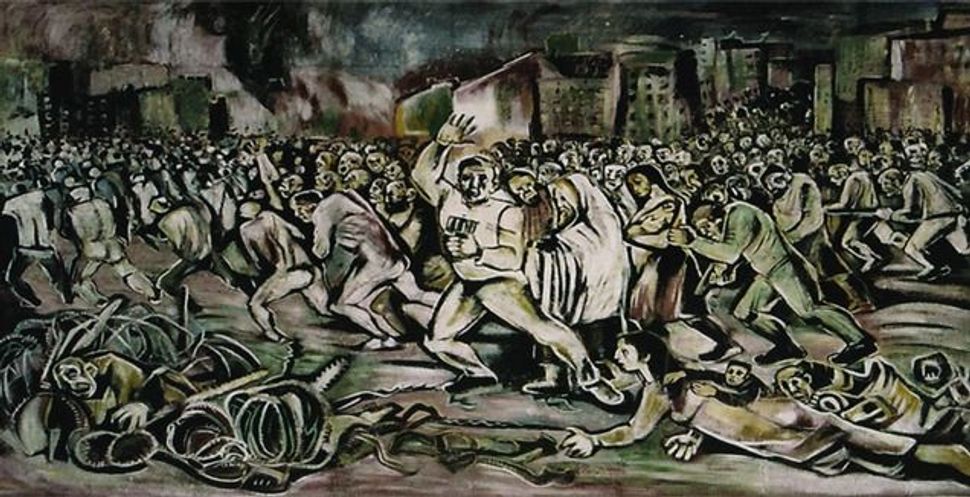 I had the pleasure of working and visiting Mexico — specifically Jewish Mexico — several years ago. I am familiar with its Yiddish teachers and some of these teachers and members of the community were my students in courses I gave there at that time.

Several weeks ago during a question and answer period following the showing of the film Yoni Fayn: Mit Pen un Pendzl (Yoni Fain: With Pen and Paintbrush) a member of the audience asked me about the mural dedicated to the 6,000,000 martyrs killed during the Holocaust that Fain had painted when he lived in Mexico. She wanted to know if it was still there and could still be visited. I answered with absolute assurance that I had seen it myself when I was in Mexico and that, of course, it was still there today, and most likely, would be there forever. Why not? How could it not be? A memorial to the six million would never be taken down. Imagine, my surprise, sadness, horror, when I learned, quite by accident, that the mural and the oyel (mausoleum) no longer stands, and had, by a very conscious decision, been torn down, not by vandals but by the same Jewish community that had commissioned it some 70 years earlier.

When I saw it, I thought it was both beautiful and powerful. The Mexican Ashkenazi community was way ahead of its time in commissioning and executing such a project; many significant Jewish communities still do not have a proper memorial to the victims of the Holocaust. Both the concept and the work itself were something that I can only imagine the Jewish leadership and the entire Jewish community could be proud of.

In the film I mentioned above, produced by the League for Yiddish, the painter and Yiddish writer Yoni Fain speaks very movingly about his experience creating this work. No less a figure than Diego Rivera was supportive of the project. For Fain, both as an artist and as a Holocaust survivor whose whole family was exterminated, it was extremely important, indeed, one of the high points of his career. All artists hope that they will live on in their works. It was doubtless also the hope of the initiators of this matseyve that both the art and the memory of the 6,000,000 would live on in perpetuity. The word matseyve is related to the Hebrew verb Yitsev יצב which means to stabilize, fortify, reinforce. What a terrible irony that this beautiful structure that was meant to strengthen the memory of the Holocaust in your community has now been torn down.

I realize it is done and unlike Ezekiel in Fain’s mural, we cannot wake the dead, no matter how much we yell and protest. It is too late for that. But, I cannot help wonder how such a decision was made. How could the leadership of a Jewish community approve such a step?! Someone suggested that space in the cemetery was scarce but surely this can’t be the reason. How many graves could tearing down the oyel have yielded?

As a Jew, an educator, Executive Director of the League for Yiddish and the editor-in-chief of its Yiddish magazine Afn Shvel, I would like to state my disapproval of this action. The decisions and actions of the Jewish community’s leadership seem to me both a desecration of an artist’s work and also of the memory of the victims of the Holocaust. I am sure that some of you are as heartsick about this action as I am.

I would be most grateful for any clarification you can give me.

A Protest to Leaders Of the Ashkenazi Community in Mexico