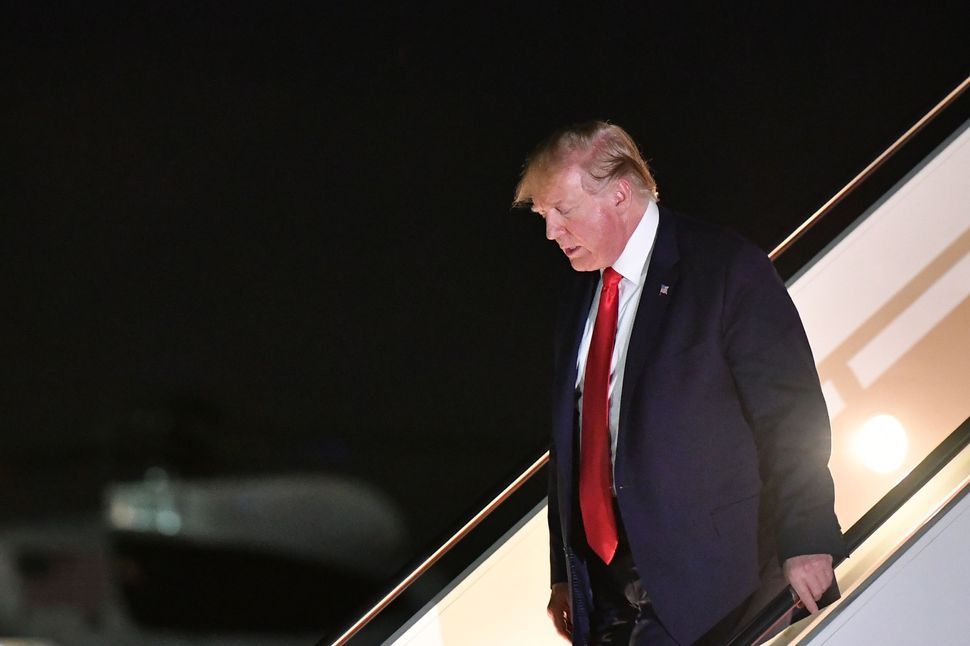 “So interesting to see ‘Progressive’ Democrat Congresswomen, who originally came from countries whose governments are a complete and total catastrophe… now loudly and viciously telling the people of the United States, the greatest and most powerful Nation on earth, how our government is to be run. Why don’t they go back and help fix the totally broken and crime infested places from which they came?” The President tweeted.

….and viciously telling the people of the United States, the greatest and most powerful Nation on earth, how our government is to be run. Why don’t they go back and help fix the totally broken and crime infested places from which they came. Then come back and show us how….

Trump seemed to be speaking about four freshmen congresswomen who had recently been feuding with Speaker of the House Nancy Pelosi, despite the fact only one of the four — Minnesota Rep. Ilhan Omar, is an immigrant, from Somalia. The other three — Reps. Ayanna Pressley, Rashida Tlaib, and Alexandria Ocasio-Cortez — were all born here in the U.S.

The tweets have understandably outraged liberals and others who accuse Trump of engaging in crass nativism in order to target a political opponent.

After all, asking Omar to to return to Somalia and fix its problems rather than criticize the U.S. is incoherent. Omar was elected as a Member of Congress; her obligation is to address American problems that her constituents care about; her country of origin has nothing to do with the matter.

Trump is not alone in his outrage at Omar, who has been critical of the U.S., and whose criticism has evoked nativist criticism from the likes of Tucker Carlson, who recently decried Omar’s “contempt” for America.

The truth is, some political activists do engage in rhetoric that goes over the top. I’m reminded of the British conservative writer Douglas Murray’s quip that there’s a difference between being a critic of a country and an opponent of it. Reading some of the rhetoric on the far side of the political left in the U.S., I do sometimes come away with the impression that they believe this is one of the worst, if not the worst, countries in the world.

Beto O’Rourke recently picked a meeting of refugees and immigrants in Tennessee, of all places, to tell them that “this country was founded on white supremacy. And every single institution and structure that we have in this country still reflects the legacy of slavery and segregation and Jim Crow and suppression, even in our democracy.” That’s kind of a bummer “Welcome to America” message.

But even if Omar is critical of the U.S., that’s no excuse to tell her to “go back to your country.”

A more important question is, are most immigrants ungrateful for the safe haven our country has provided them, harboring contempt for our core values and society?

The data suggests the opposite is true; immigrants tend to be the most pro-American members of the population.

Let’s start with the fact that a lot of people want to come here — more than want to go to any place in the world. Gallup surveyed people around the world about where they would like to move to. 21% of migrants said they wanted to come to the United States, a total of 158 million people. Canada came in a distant second, netting 6% of respondents.

It may even please conservatives that most immigrants, like most on the political right, believe federal income taxes are too high!

While social conservatives stress the importance of two-parent families and traditional living arrangements, it’s immigrants who are more likely to embrace this mode of living. 82% of children of immigrants lived in two-parent families; among those with US-born parents, the percentage was 69%. The Urban Institute notes that families with at least one foreign-born parent were also slightly more likely to work a substantial number of hours, meaning that immigrants are embracing the work ethic that conservatives admire.

Conservatives tend to value patriotism and nationalism. They want the citizens of the country to honor the country’s history, institutions, and culture. It is also important for them to be able to compare America favorably with the rest of the world. The reality is, the nation’s immigrants are the ones most likely to share these values with them.

There are plenty of legitimate debates to be had about immigration, including its impact on the economy, and what the best path for dealing with our nation’s 13 million undocumented immigrants is.

But we should stop pretending that most immigrants are ungrateful to be here or that they harbor undue resentment towards our country; they are among the most pro-Americans of all Americans.