Is Anti-Semitism Really At Unprecedented Levels In The US? Not According To Data 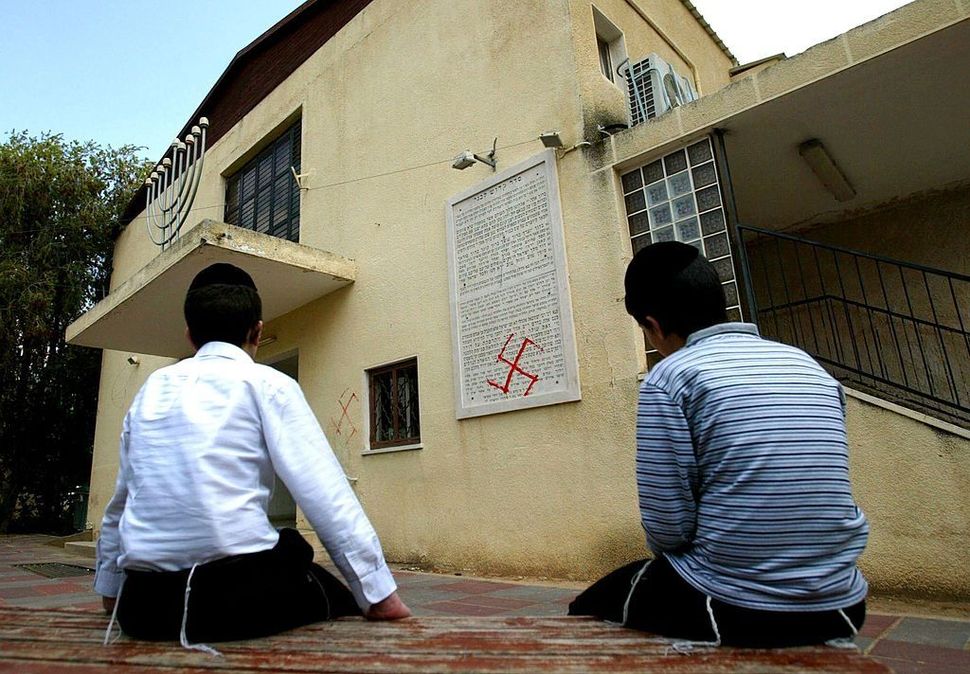 IRVINE, CALIFORNIA – OCTOBER 31: (EDITOR’S NOTE: Image contains profanity.) Anti-Semitic graffiti is written on the Beth Jacob Congregation of Irvine on October 31, 2018 in Irvine, California. Antisemitism in the United States has come to the forefront recently in the aftermath of the deadly shooting at the Tree of Life Synagogue in Pittsburgh, Pennsylvania. (Photo by Allen Berezovsky/Getty Images) Image by Getty Images

On Sunday, a Jewish man standing outside a synagogue was shot in the leg in what police are investigating as a possible hate crime. It was only the latest in a string of anti-Semitic attacks this year.

These attacks have brought in their wake headlines declaring “a spike in hate crimes” and “increased anti-Semitic attacks all across this country,” based on episodes like Sunday’s as well as data. Earlier this year, the FBI reported the largest increase in hate crimes since 2001, and the Anti-Defamation League reported that anti-semitic incidents rose by 57% in 2017.

As a result, a consensus has developed around the idea that hate crime and anti-Semitism are rising, and that Jews are no longer safe in the U.S. Leaders across the political divide agree.

But I’ve found myself skeptical of these claims of rising hate. Partly, this is because of a rather personal reason: Since moving to the US over a decade ago, I have never personally experienced hate or a hate crime.

But I was skeptical for a professional reason too. As a mathematician by training, I spent my PhD years working with messy crime data. And the truth is, it cannot be trusted at face value.

I couldn’t help but wonder if the data on hate crimes, especially those pertaining to the Jewish community, might have similar problems.

And it does. Big time.

To dig deeper, I looked at all the available data on hate crimes, which included incidents of hate by year, surveys, and reports. I sought out datasets, what are in their ideal form collected methodically year after year by faceless government statisticians. I also downloaded spreadsheets and mined the numbers myself.

What I found will probably surprise you: We have a real anti-Semitism problem in this country. But it’s not getting worse.

It’s important to keep in mind that hate crimes are not a leading cause of injury or death; in the same year 37,000 people were killed on the roads, and 2.3 million injured or disabled.

But you can’t compare hate crimes to road accidents; with a hate crime, like with terrorism, the victim is targeted because of their group identity, and the entire group feels threatened. Hate crimes select symbolic targets, such as community buildings, whose significance far exceeds their property value.

And research indicates that being in a targeted group is not just discomforting but can have a tangible effect how people behave. We know from Europe that attacks on Jews can trigger a wave of immigration to Israel, and it should not be assumed that the same cannot happen to American Jews.

Even more disturbingly, research on fertility data from 170 countries found that during waves of terrorism there is a decline in births.

All of this made me even more anxious to find out if there was actually a wave of anti-Semitism sweeping through America. So I sought out the two most frequently-cited sources of hate crime data: reports from the ADL and the FBI.

Let’s start with baselines. According to the FBI’s most recent data, 2017 saw 7,175 hate crimes nationwide, including 15 hate murders. Anti-Jewish hate crime incidents represented 13% of all incidents – 923 – coming in second only to Anti-Black hate crimes, which numbered 2,013 incidents.

There were also more anti-Semitic incidents than “anti-gay” crimes, for example. Most importantly for our purposes, because Jews make up just 1-2% of the US population, these numbers mean that the Jewish community is targeted by hate crimes disproportionately to its numbers by a factor of ten.

The ADL has been tabulating data on anti-Semitic hate crime for an impressive 40 years, and it receives data both from the police and the public. The ADL has built out a modern data center and has interactive online visualizations.

However, these numbers should be taken with a mild dose of the proverbial salt. The problem with hate data is that only 20% of hate crimes are reported to the police, and, one suspects, even fewer to the ADL. So the statistics give just the tip of an iceberg; the majority of hate times are not included in this count.

This makes them somewhat unreliable. To rely on 20% of the data to determine if there is a wave of anti-Semitic hate crimes would be like looking at the top shelf of your fridge, and finding it overflowing, deciding that you need to buy a larger fridge (I would suggest looking at the other four shelves first).

And you can’t just compare the 20% of reported crimes each year to the 20% from last for the simple fact that the reporting rate is not a constant 20% of all crimes. Reporting goes up and down along with public concern. An increase in concern about hate crimes can increase the number of reports by the public, and even the number of police investigations, making more of the “iceberg” (or fridge) visible and inflating the numbers.

To put it plainly, if many people started to believe, fairly or not, that we are in the midst of a wave of hate, they would also start to report more hate crimes, making the data inconsistent with the past.

This is not to say that the jump in anti-Semitic hate crimes reported by sources like the ADL is a statistical mirage. But the reality is probably different from what the numbers suggest.

Independently of the ADL, the FBI has been reporting hate crime data since the 1990s through its Hate Crime database. It has developed impressive guidelines to judge if a crime incident is indeed a hate crime, and its reports are available online. Surely, here we can expect to finally find deep databases processed by standard and reliable statistical methods!

But alas, the FBI’s numbers also need to be taken with a little grain of kosher salt. The problem is that crimes are generally reported to the local police department and not to the FBI directly, so the FBI’s data is only as good as the reports it receives.

In some states, less than 10% of the police agencies bother to report to the FBI at all, and likely only report the more severe crimes. As a credit to the system, the FBI provides consistent data that goes back to the 1990s, and thus is well-suited to recording if there are any national trends.

As with the ADL numbers, the data quality is not great, thanks to under-reporting. But even taking that into account, we appear to still be well below the numbers of the 1990s.

Fortunately, there is another government crime tracking program that has been all but forgotten by the press: the National Crime Victimization Survey. Unlike the ADL and the FBI, who collect reports, the NCVS goes out to the communities and interviews some 160,000 people every year, asking them if they were victims of various crimes.

Because the NCVS uses a representative sample, it can reliably estimate the number of crimes in the entire country, including hate crimes. If there is a wave of hate in America, the NCVS would detect it in its survey.

In its most recent report, NCVS estimated that 204,000 hate crimes occur in the US annually, of which just 15,000 are confirmed by the police.

The NCVS also shows that hate crime rates have been steady every year since 2015, and were probably higher ten years ago.

There is no data specifically on anti-Semitism in NCVS, but if we assume per the FBI’s estimate that about 13% of hate crimes are anti-Semitic, then there are a staggering 26,000 anti-Semitic crimes every year in the US — 30 times more than reported by the FBI and 14 times more than the ADL.

What we can learn from these statistics is both good and bad. For all the problems of the last few years, there is no reason to fear a wave of hate, because the wave, if it exists, is a small one.

Today’s Jewish America has probably the safest existence of any Jewish community in history. In this generation, a Jew is much more likely to suffer a car accident than a hate crime.

But to believe naively in the American utopia is to ignore the truth: Hate is alive and well in America, and Jews are often the target of it.

Alexander Gutfraind is a research associate professor at Loyola University Chicago where he uses data science to solve problems in healthcare and security.

Is Anti-Semitism Really At Unprecedented Levels In The US? Not According To Data