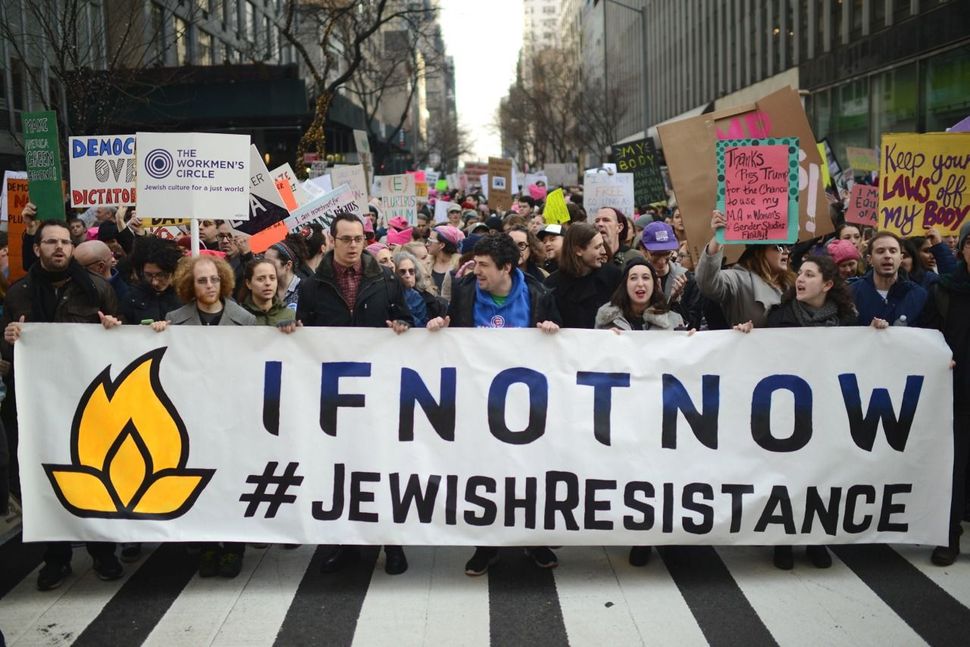 Lies come in a number of forms. You can lie by telling an outright falsehood. You can lie by distorting the truth. And you can lie by omitting crucial context. Lying by omission is uniquely nefarious, for it involves taking something that is true in its complete form and altering it such that it still resembles the truth despite departing from it, duping well intentioned people with false versions of fact.

Lying by omission is the activist group IfNotNow’s specialty.

Throughout the Democratic primary, members of IfNotNow, a far-left organization that opposes Israel’s occupation of the Palestinians but doesn’t take a position on whether the Jewish State has the right to exist, have been showing up at candidate events and bringing their agenda. They will pose a question to a candidate, demanding criticism of Israel. The action is then followed by a tweet either crowing about how the candidate shares their worldview, or smearing the candidate as a shill.

last week, a member of the organization performed this routine on Vermont Senator and presidential hopeful Bernie Sanders. At a Vermont event, Sanders took a question from a young woman named Emma who spoke about the importance of “ending the occupation” and asked Sanders why it was important to him.

IfNotNow seemed to get what they came for, and eagerly tweeted the exchange.

“As someone who is proudly Jewish, to be critical of a right-wing Netanyahu government in Israel is not to be antisemitic.” pic.twitter.com/kfXmsLP0yz

And yet, this stunt contained a lie by omission. The video they shared edited Sanders answer to reflect their views — not his. Sanders did say, “The U.S. government gives a whole lot of money to Israel and I think we could leverage that money to end some of the racism that we have seen in Israel.” He also said that being critical of Israel was not anti-Semitic.

But IfNotNow was less willing to share a third sentiment that the Vermont Senator took pains to emphasize — so unwilling that they edited it out entirely from their video: “The fault is not all with Israel. You got very poor & corrupt Palestinian leadership,” Sanders said. “The goal of the US needs to be to bring together people of the region, the Palestinians and the Israelis and create a workable peace.”

IfNotNow edited out all references to Palestinian responsibility and agency from the video posted on their Twitter feed, making it sound like Sanders put all the fault and responsibility on Israel.

You can see the whole video for yourself here (Emma’s question begins 39 minutes in):

The dishonest editing was originally pointing out by the Democratic Majority for Israel’s Twitterfeed:

This @IfNotNowOrg release is a fraud.

The red circle shows where Sanders actually says “the fault is not all with Israel. You got very poor and corrupt Palestinian leadership.”(2/5) pic.twitter.com/CbHwseLqih

Sanders himself tweeted the exchange, in which he, unlike IfNotNow, included the section where he shared responsibility for the occupation. And in his tweet, he highlighted the need to bring both parties to resolve the conflict with an agreement that creates peace and security for both peoples.

The role of the United States must be to bring parties together to resolve conflict. When we are in the White House we will push the leadership on both sides to reach an agreement that creates peace and security for both Israelis and Palestinians. pic.twitter.com/LukYTTLIMG

That IfNotNow edited this part out is shocking. But it is also far from a misstep. Instead, it’s the group’s modus operandi, which is clear from their other actions. Editing out meaningful parts is kind of their thing. Time and time again, IfNotNow engages in stunts that force people to choose between the different values they hold dear, pitting their identities against one another.

This erasure starts with the group’s name. The full quote from which they took their name comes from the Jewish text “Ethics of Our Fathers,” where Hillel the Elder is quoted saying, “If I am not for myself, who will be for me? If I am only for myself, what am I? And if not now, when?” The phrase speaks to the need to stand up for yourself first, to know where you come from and to be true to that. Only then, says Hillel, can you reach out to advocate for others, from a position of confidence, strength, and belief in your identity. And this has held true for Jewish activists throughout Jewish history, who have grounded their universalism in Jewish pride and heritage.

But IfNotNow’s method has been quite the opposite, forcing Jews to choose between their Jewish identities and their progressive bonafides. And a lot of this is done by trying to cut young Jews off from their tradition, while using Jewish texts and sources to do so — in other words, through a lie of omission.

Take for example the recent DC Dyke March that IfNotNow co-sponsored, which banned the Jewish Pride flag. Rather than call out the Dyke March for this blatant anti-Semitism, IfNotNow promoted a Medium post defending the ban on Jewish symbols, written by two Dyke March organizers and IfNotNow members. And when Jewish women showed up wanting to march anyway, a member of IfNotNow literally acted as the gatekeeper, telling the Jewish women to leave their Jewish stars behind (integral parts of the Jewish Dyke flag) or not to come in.

An organizer for the #DykeMarch tells the Jewish counter-protesters that they will allow Palestinian flags but not the Jewish pride flag. pic.twitter.com/HP8KRrOqu0

The Jewish women were eventually allowed in. But not before IfNotNow had participated in and defended a demand that fellow Jews — fellow liberal Jews — cut off a part of their identity. And as is their wont, the group justified the call by erasing Jewish history, claiming that the pride flag “looks a lot like an Israeli flag, a Zionist symbol.” Of course, the Jewish star has been a Jewish symbol for thousands of years. IfNotNow chose to omit that.

It’s all part of the way they do business: by cutting Jews off from their history, and giving cover to those who wish us harm. The young people IfNotNow trains routinely appear in videos where they appear ignorant of the facts of how the current reality in Israel came to be. Rather, they are given catch phrases to chant, questions to accost politicians with, and false binary choices to force on people who will then be labelled good or bad depending on their answers. Effective with PR but less so with original content, the group started out interrupting Birthright travelers at airports, harassing young Jews about to embark on a trip to learn about their Jewish heritage in Israel with questions about an occupation that it was clear the activists didn’t really understand. They then upgraded to disrupting actual Birthright trips by harassing tour guides and claiming that no one would answer their questions about Israel’s policies.

In a chutzpah to end all chutzpahs, they had the gall to ask the public to fund their return flights after they were kicked off the trip for their antics.

The truth is, these activists hadn’t come to ask questions. Their goal was to disrupt, film their antics, and get cheap PR while tarring Birthright — the same organization to which they lied on the forms they filled out to swindle them out of a free trip to Israel to pull their shtick.

IfNotNow manipulates good people — young Jews who want to create meaningful change. By using just enough Jewish content to attract these young Jews, while omitting most of the facts, the organization dupes them into thinking that a shallow understanding of a deep and complex reality is enough to demand a particular solution. It preys on a unique mix of Jewish belief in social justice, Jewish guilt, and a new world where weak equals victim and strong equals oppressor and historical facts and context are disposable.

In this world, all injustices are the same, and anyone who suggests otherwise is racist.

But the worst thing about IfNotNow isn’t their lies. It’s not their saying Kaddish for terrorists, or assisting people in kicking Jews out of the left. The worst thing about IfNotNow is that far from fostering positive change, the net result of this organization will be further division — specifically within the Jewish community in which it agitates. Because at the end of the day, their target is Jews — Israeli Jews like me.

IfNotNow seeks to create a new Judaism which severs Jews from their heritage in word and in deed by omitting those things that make us Jewish, like the Jewish star on the pride flag, or repurposing them, like the meaning of the holy verses they use to clobber their own people. In so doing, they are pitting Jews against other Jews, especially those that want to cling to both their social justice causes and their Jewish heritage.

Unfortunately for them but fortunately for the Jewish people, they simply can’t erase the fact that Jews have a long and proud history of fighting for human and civil rights while also having Jewish pride. You can’t erase that by editing a video. The notion that Jewish pride must be checked at the social justice door is a false one, along with most of what this dangerous group stands for.

Shoshanna Keats-Jaskoll is the co-founder of Chochmat Nashim, an Israeli NGO dedicated to battling extremism and raising the voice of women in the Jewish conversation. She invites anyone seeking organizations that welcome both Jewish pride and the fight for human rights to email her for some amazing causes to join. Follow her on Twitter, @skjask