Why Does No One Care About Violence Against Orthodox Jews? 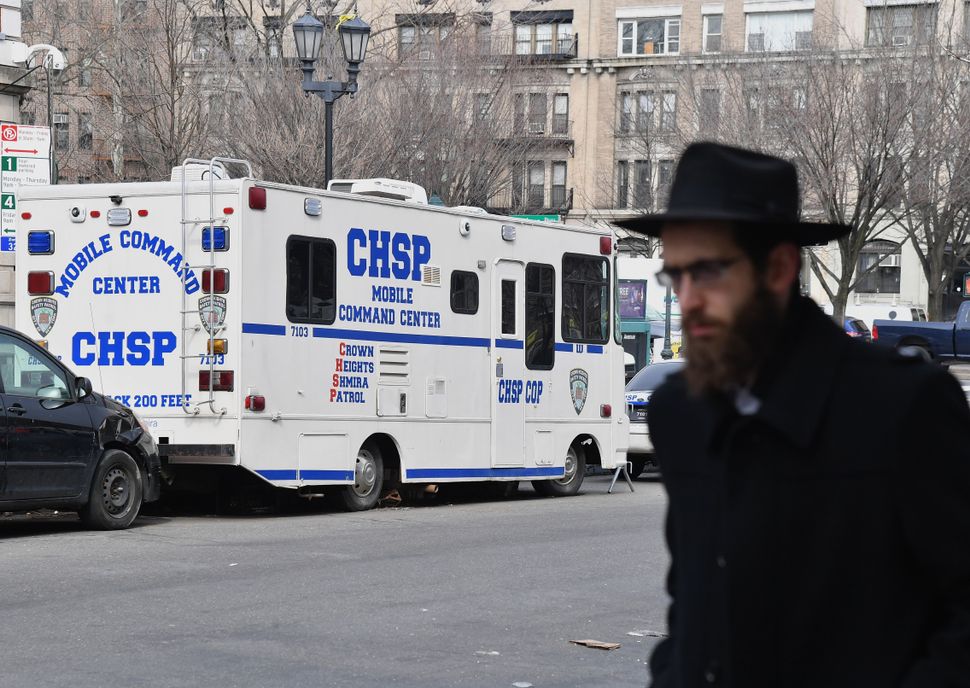 An Orthodox Jew walks past a ‘Crown Heights Shmira Patrol’ security vehicle in the Brooklyn neighborhood of Crown Heights on February 27, 2019 in New York Image by Getty Images

No one should have been surprised yesterday morning, when a man assaulted Rabbi Avraham Gopin, 63, with a brick in Crown Heights Park — knocking his teeth out and injuring his face, before fleeing the scene.

The attack on Gopin was just the latest in a string of rising violence against Orthodox Jews in New York City. As Armin Rosen wrote for Tablet Magazine back in July, “anti-Semitic hate crimes against persons, which describes nearly everything involving physical contact, jumped from 17 in 2017 to 33 in 2018, with the number for the first half of 2019 standing at 19, according to the NYPD’s hate crime unit.”

It’s not just in New York City. American town halls are filled with enraged residents; in Hudson Valley, they shout to “keep the Hasidic out”; in northern Jersey, they fight against the eruv, a symbolic string attached to telephone poles, lest Orthodox Jews move into town; in New Jersey’s Ocean County, tension is simmering and about to reach a boil as thousands of residents threaten to violently “rise up” against Orthodox Jewish growth in the neighborhood.

The implication is clear: This is not a home for you.

It’s time we talk about how people love to hate Orthodox Jews.

It happens all the time. And it starts with casual rhetoric, as all things do. I witness it personally, often as the only Orthodox Jew in liberal spaces. “Did you know that there are some Orthodox rabbis whose expertise is in financial ethics in Jewish law?” I once remarked to another journalist, years ago.

“Orthodox rabbis who have financial ethics?” The colleague laughed. “What’s that, like stealing everyone’s money?”

It was just a joke. But it’s never just a joke. I hear this sort of banter far too often, thanks to the strange place I’m in as an Orthodox Jewish journalist. It’s my job to be openly critical of my own community when necessary, pointing out internal wrongdoings. And then, I must watch, anguished, as those who hate us take up that criticism of the dregs of our society and twist them into dangerous blanket statements that besmear entire communities.

Those who hate us abound. The Orthodox are the Jews of the Jews. We are othered, shamed, and ridiculed for our religious practices — by non-Orthodox-Jews and non-Jews alike. And that rhetoric often escalates into downright dehumanization.

And almost no one will stand up for us. Even when Orthodox Jews are brutally attacked, those with power limit their reaction to a single tweet. After yesterday’s attack in Crown Heights, New York City officials posted obligatory calls for tolerance, yet the lack of any real action is troubling. In June, at the Jewish American Heritage Month party at Gracie Mansion, Mayor Bill de Blasio promised to immediately open an office devoted to combatting anti-Semitism; it’s two months and several anti-Jewish hate crimes later, and Jewish communal representatives are saying that they have yet to get an update on this. (The Anti-Defamation League is the notable exception in this case, offering a $5,000 reward for information.)

Tweets and press releases have yet to stop a single attack.

Why will no one speak up on our behalf? Why don’t people rush to call out these hate crimes? Instead, they won’t even call it a hate crime. We have to hear them call it a mugging, or tell us it wasn’t due to the black hat or yarmulke — but actually due to a development, the schools, measles outbreaks, tax evasion, don’t you know.

Why won’t anyone speak up? Is it because they do not see Orthodox Jews as real Americans, as citizens deserving of the right to live safely in their communities? Are we too “other,” too “apart,” “disloyal,” to earn the privilege of peaceful existence? Is it because we are politically inconvenient? If the perpetrator wasn’t a white supremacist who voted for Trump, then it didn’t really happen, did it?

The unwillingness to act from those in power in New York City sends a clear message to my community: If the perpetrator doesn’t wear a red baseball cap — we don’t care. If the attacker wasn’t radicalized by a 4chan discussion about immigrants — it’s not a crime worthy of serious response, because it won’t assist us in our electability, and it will just complicate matters.

And so, the American Orthodox Jew either hears that his exposure to danger is politically inconvenient, or that in fact, this isn’t anti-Semitism; it’s local politics. It is merely pushback against a development going up nearby, which will soon be infested with Orthodox children. It is merely hygienic concerns with the Hasidim, who are all anti-vaxxers who carry diseases. It is merely opposition to Orthodox colonization.

Those are all dog whistles for what is at the heart of this: A deep, centuries-old discomfort with the religious Jew. The Jew who, though a proud American citizen, refuses to assimilate entirely; the Jew who insists on her own identity and practices.

Now, more than ever, Orthodox Jews will need the mobilization and support of secular and progressive Jews. Put political affiliations aside, and focus on the fact that in broad daylight, innocent Orthodox Jews are getting attacked — while politicians sit idly by.

Our secular brethren may walk in the street and have the luxury of blending into the crowd, as anonymous New Yorkers, but we wear our identities on our sleeves. And this puts us at the very front lines of anti-Semitism in the United States today.

What will it take to get you to pay attention?

Why Does No One Care About Violence Against Orthodox Jews?