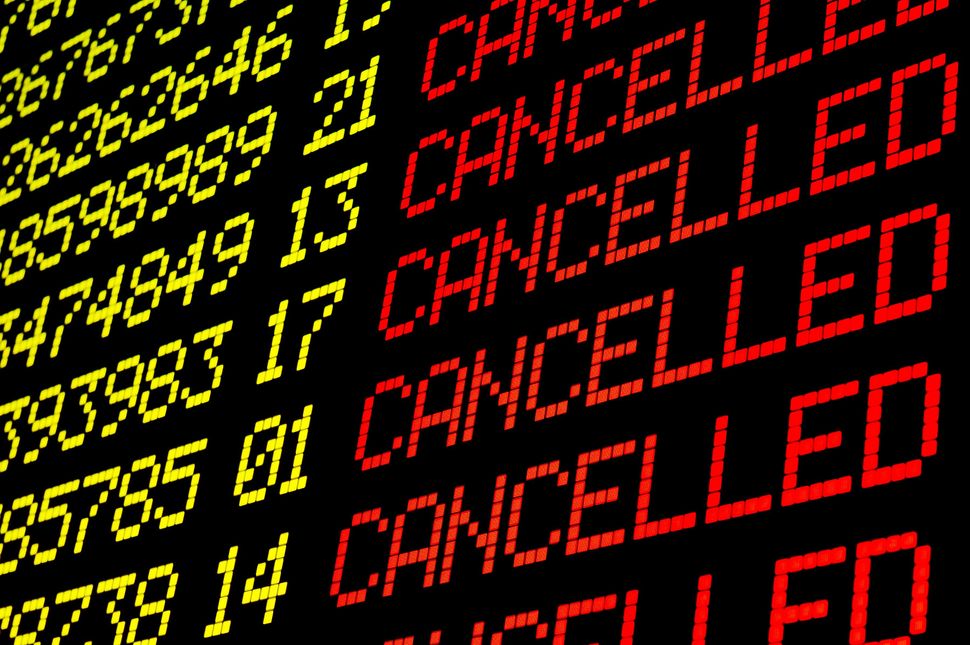 This morning, news emerged that a Trump Labor Department official had lost his job just 18 days into it, after what the reporter called “anti-Semitic Facebook posts” came to light. Leif Olson, who started at the Labor Department’s Wage and Hour Division on Aug. 12, was accused by Bloomberg News of writing on Facebook that the Jewish-controlled media “protects their own.” After the reporter, Benjamin Penn, sent a screenshot of the post to the Department of Labor, the department told Bloomberg Olson had resigned.

But this was no triumph of good journalism against bad actors, or a well-deserved embarrassment for an administration that coddles bigots. It turned out to be something of the opposite, in fact. After the flap was reported Tuesday morning, political Twitter rallied with rare unanimity to support the alleged anti-Semite, and to condemn the reporter who broke the story, Bloomberg reporter Benjamin Penn. Why? Because even a cursory at the offending posts by Olson made it entirely obvious that the comments were sarcastic and intended to mock anti-Semitism, rather than to express or endorse it.

How did this happen? It’s hard to say whether Penn’s appallingly bad reporting was the result of deliberate dishonesty or incredible sloppiness. Either way, it seems clear that political bias played a major role. Olson’s comments were seen by Penn through the lens of preconceived notions about conservatives and bigotry. The result was a total failure of basic humor detection.

The posts that brought down Olson, a Texas Republican who had been working as a senior policy advisor in the Labor Department’s Wage and Hour Division, were made on his personal Facebook page on August 30, 2016 in a discussion of then-House Speaker Paul Ryan’s crushing primary victory over challenger Paul Nehlen. Olson wrote:

“Establishment insider RINO [Republican in Name Only] corporate tool Paul Ryan was finally brought to heel in tonight’s primary election by an uprising of the conservative masses of Real America eager for an authentic voice in Washington instead of the same tired globalist open-borders pap they’ve been pushing on us since the Elites abandoned the People. The guy just suffered a massive, historic, emasculating 70-point victory.”

Tell me, what honest report calls this sarcastic criticism of anti-Semites anti-Semitic? Leif is a friend, and I’d trust him with my Jewish life. I’m appalled at Bloomberg’s hit piece disrupting his life for no reason. pic.twitter.com/Gc6aookkDZ

A commenter on his page wrote, “He’s a neo-con too, you know.”

“No he’s not,” replied Olson. “Neo-cons are all Upper East Side Zionists who don’t golf on Saturdays if you know what I mean.”

“That’s what I mean,” replied the other commenter. “He’s a Jew. Everyone knows that.”

Olson then replied, “It must be true because I’ve never seen the Lamestream Media report it, and you know they protect their own.” 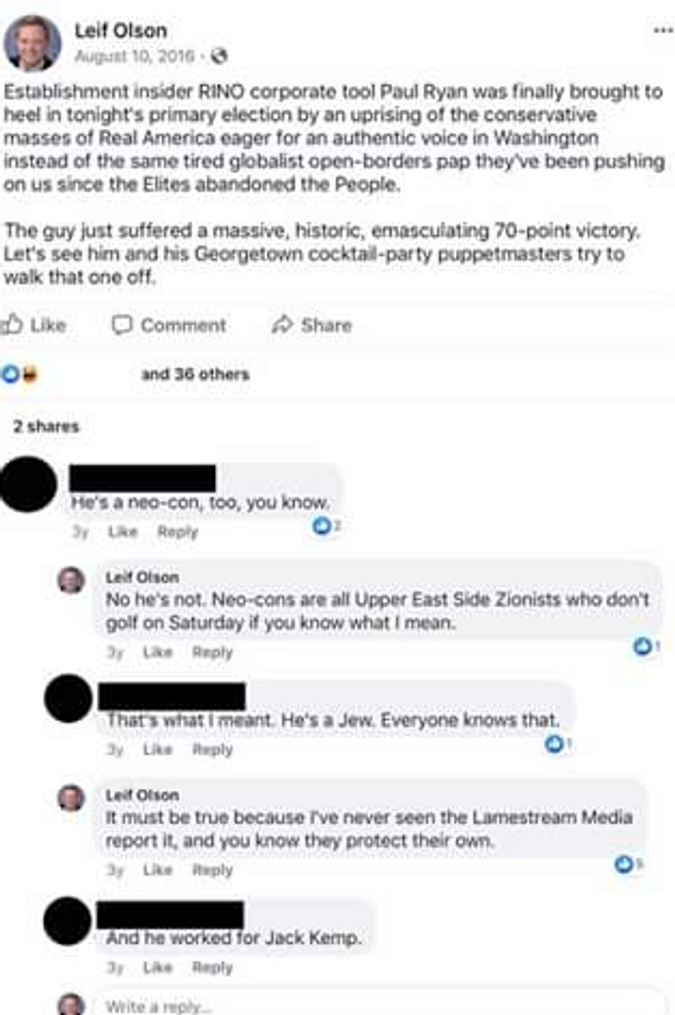 The entire exchange is clearly a riff on far-right populist and alt-right tropes. Their relevance becomes even clearer when one recalls that Ryan’s rival Nehlen was an outspoken white nationalist and alt-right supporter who openly spouted anti-Semitic views and alluded to Jewish conspiracies.

In other words, the mockery was clearl directed at Nehlen and his supporters, not at Jews.

And while the Bloomberg article quoted Olson as saying that the posts were “sarcastic criticism of the alt-right’s conspiracy theories and anti-Semitic positions,” Penn seemed to suggest that this explanation was a weak excuse. Perhaps most baffling, the article acknowledged that the initial post in the thread was a “sarcastic quip” about Ryan’s win. (The piece also acknowledged that a review “a decade of Olson’s Facebook posts” turned up no other evidence of anti-Semitism and that his page featured greetings for Jewish holidays.)

Most inexcusable is the fact that the screenshot of the Facebook exchange included in the article snipped off the part where the poster on Olson’s page congratulated him on “epic sarcasm.”

Was this intentional? In Twitter exchanges, Penn certainly seemed convinced of the righteousness of his would-be exposé. He even shared screenshots of a scathing DM from Commentary editor John Podhoretz calling him a “repugnant child” in the expectation of sympathy from Twitter; instead, he was deluged with comments backing up Podhoretz, even from people who are generally not fans of his.

My fellow journalist ⁦@jpodhoretz⁩ is DMing me that I’m a “miserable prick” and a “repugnant child.” All over this piece: https://t.co/68kDvaFn0h pic.twitter.com/VJGLaD9vTZ

Notably, while Penn’s hit piece is thin (to put it mildly) on evidence of anti-Semitism, it extensively discusses evidence of Olson’s Christian faith and conservative politics, including his work on a case opposing same-sex marriage and on a brief against an Obama administration program preventing the deportation of some illegal immigrants. The article also mentioned controversies over other Trump administration officials accused of bigotry or domestic assault, as well as the recent Trump tweet accusing Jews who vote for Democrats of being “disloyal” to Israel.

The inference seems clear: As a conservative whose positions many progressives would consider bigoted against gays or immigrants, and as a staffer in an administration that has a serious bigotry problem, Olson already had two strikes against him. Anything he says and does is going to be interpreted in the least charitable light, even if it takes some strategic omissions.

The lesson is a stark one: When we want to believe that someone on the “bad-guy” side is a terrible person, our sarcasm and humor detectors are prone to failure.

It’s an understandable, tribal human instinct, and it’s common across the political spectrum. (Many conservatives are adamantly convinced that the leftist professor who tweeted “All I want for Christmas is white genocide” was actually calling for a mass slaughter of white people — of whom he is one — rather than poking fun at the alt-right panic about “white genocide” via race-mixing.) But it’s also an impulse we should resist, not only because it leads to people being wrongly smeared as bigots, but because it trivializes and discredits valid charges of racism and bigotry.

And that’s not the only problem with the willful misunderstanding of Olson’s joke. It feeds the “fake news” narrative on the right, as well as polarized distrust of the media, and the perception even by centrist conservatives that the press is out to get anyone on the right.

It’s unclear whey Olson resigned so quickly, or if and why the Department of Labor apparently forced him out. Perhaps, after past scandals, they were skittish of even the shadow of racism, especially after Penn reportedly called numerous officials to ask why a man with a history of anti-Semitic comments was allowed to take the job.

Still, the real fault lies with Penn and with Bloomberg News for running his story without fact-checking.

The silver lining here is the swift and virtually universal condemnation of Penn’s hit piece, and the quick consensus that Olson’s posts were sarcastic. It’s not every day that you can get John Podhoretz and Jonathan Chait on the same side of an issue. Even in 2019, irony isn’t dead. That’s a relief.