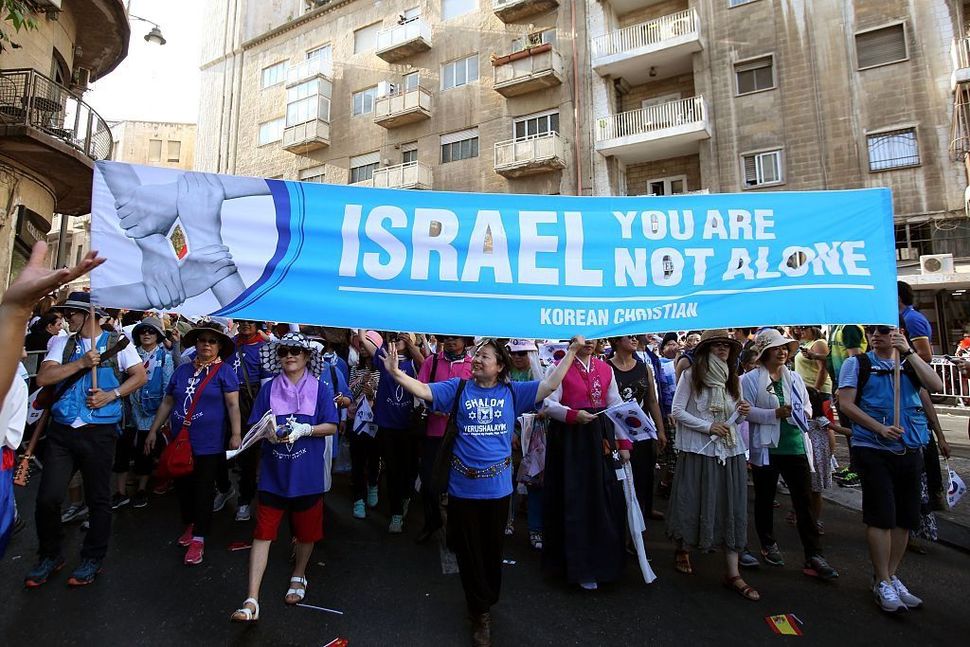 I am seven years old and sitting in a fundamentalist Baptist church. My pastor is ranting about Jews again.

“I will bless them that bless thee, and curse him that curseth thee,” the pastor reads from his King James Bible, describing God’s promise to Abraham.

He explains that it is our duty to support the children of Abraham because we do not want to be on God’s wrong side. He also claims that America is blessed because it has historically supported Israel.

Even at my young age, I have heard it all before, and I nod along. And even though I was a Scotch-Irish kid growing up in rural Colorado, I had already pledged my life to worshipping the God of the Jews.

In the fundamentalist, conservative church I grew up in, with hymns and organs, long skirts for the ladies and young-earth creationism, preachers frequently borrowed an image from the New Testament book of Romans to explain the relationship between Christians and Jews. It said that Jews were like an olive tree with a strong root in the law, the prophets and the Torah.

Gentile Christians like me were like a wild branch that is grafted onto the tree. Christians were not one with Judaism, but were supported and nourished by it. We were taught that Christians and Jews are natural allies. We worshipped the same God and had largely overlapping beliefs on morality and big life questions. All that really separated us was a difference of opinion as to whether or not Jesus of Nazareth was the Messiah.

Sure, there were political differences; my church was almost 100% Republican, and we knew that most American Jews were Democrats. But we did not care. The Biblical mandate to support Jewish people trumped the fleeting controversies of partisan politics.

I eventually abandoned the fundamentalism of my youth. But I retained my Christianity, and with it, the love of the Jewish people and Israel.

I am a twenty-three year old law student, sitting in an East Village bar with two of my best friends, both of whom happen to be Jewish. As good law students, we could not help but lose ourselves in debate when we should have been studying. But one of them is about to drop a bomb on me.

“Christians hate Jews,” he said. I had never heard anything of the sort before. I shake my head in stunned silence and look to my other friend, but he is nodding along. I was not sure what to say, so I point out that Christians support Israel.

“Christians only pretend to support Israel,” he said.

He explained that, in his view, Christians supported Israel because they wanted Jews to leave America. Once all the Jews are in Israel, he said, Christians believe that Jesus will return and kill them all.

I ask him where he heard such nonsense. He looks at me like I am the most naïve person he has ever met — which I might have been — and he says that this fact is common knowledge.

I tell him that I have gone to church almost every week of my life, and visited almost every denomination — evangelical, fundamentalist, mainline Protestant, black churches, white churches, charismatic churches, and even the occasional Catholic mass, just for fun — and I had never heard anything like this before. I explain that, throughout my life, I had only ever heard positive things about Jews from my fellow Christians.

My friends shake their heads. They tell me that I must have gone to a weird church. They knew what Christians really believed, and I did not.

I am a thirty-six year old partner at a civil litigation law firm, and my friends’ old conspiracy theory has now gone mainstream. In the Twitter era, your political opponents cannot just be misguided; they must be evil, completely devoid of even the smallest virtue. And as we shut each other out and dig into our tribal affiliations, pernicious conspiracy theories thrive, including the one about Christian support of Israel.

Writing recently in the Washington Post, Talia Lavin insisted that Christian Zionists view American Jews as “irrelevant” at best, no more than “blank-faced pawns [to be] maneuvered toward the Rapture.” She argues that Christians only pretend to support Israel because they believe a strong Israel will hasten the end of the world and the second coming.

In other words, Christians fake their support for Israel and Jews; in reality, we want Jews to go to Israel so that Jesus can come back and kill them.

This view is common on today’s left. But the problems with it are legion. For starters, it ignores the most logical explanations for Christian support for Israel — shared scripture, shared values, and the Bible’s mandate that we do so — in favor of a poorly sourced and paranoid explanation that imagines the worst intentions in others.

There is simply no evidence suggesting that large numbers of Christians harbor a terrifying desire for Jesus to slaughter innocent people. This is the Jesus that, according to Christian scriptures, was a Jew, recruited Jews to his cause, and wants nothing but the best for his people, as well as everyone else. Paul even concludes Romans 11 by predicting that all of Israel will be rescued and blessed, not killed. And while there are a variety of “end times” theories based on vague Bible verses, millions of Christians are not flocking to church each week to fantasize about a murderous Jesus who will kill the very people that God told us to love.

Even for evangelical Christians, who are more likely than other types of Christians to be preoccupied with specious “end times” predictions, support for Israel is not primarily based on any sort of evil prophecy.

A 2017 survey of evangelicals who support Israel found that the primary reasons for their support were their beliefs that God gave the land of Israel to Jews and that was that Israel is the historic Jewish homeland. Only 12% of evangelicals cited fulfillment of prophecy as the most important reason to support Israel.

But even with that small subset, fulfillment of prophecy does not mean some sort of evil vision where Jesus comes to kill. “Rapture theology” itself is actually nowhere to be found in the Bible. It was invented in Ireland in the 1830s based on some badly misinterpreted New Testament passages. More importantly it has remained a relatively fringe belief throughout much of American history.

Catholics and Orthodox Christians — the two oldest denominations in the world — have never believed in a rapture, nor have Lutherans. Among American Protestant pastors, only a third believe in a rapture. In my decades of church attendance, I have heard just two or three sermons on the “end times,” and I have never heard anyone, pastor or congregant, express a desire for Jesus to kill anyone.

The truth is that the Bible does not have much to say about the end of the world; our focus is, and should be, on improving the here and now.

This is not to say that Christians are blameless in their current predicament. Loud, rightwing, and sometimes paranoid Christians like Jerry Falwell and John Hagee have dabbled in anti-Semitism, end-times grifting, and other unsavory rhetoric. With billions of Christians around the globe who have diverse beliefs and denominations, we are all bound to be embarrassed by someone in our spiritual family.

Moreover, some Christians can go over the top in their support of Israel, ignoring Jewish voices and critical nuance in the process. A recent poll found that 42% of American Jews believe that President Trump is favoring Israel too much, while only 26% of American Christians share that belief. In other words, more Jews than Christians believe that the current administration is too pro-Israel.

Too often, Christian thought on Israel or Judaism is a black and white, cartoonish Israel Good; Jew Good ideology that lacks sophistication. Many American Christians support Israel. American Christians, particularly evangelical Christians, are some of the most fervent supporters of Israel in America. Christians who attend church frequently are statistically the most supportive. This is a virtue. And yet, many do so as a matter of religious dogma, not as a matter of educated opinion. Our President clearly has not helped the matter.

Christians like me have a lot of work to do: educating ourselves on Israel, ridding anti-Semitism from our ranks, and celebrating and including modern Jewish voices. But the paranoid conspiracy theory about a genocidal end to the Jews is no way to critique that which truly deserves criticism.

Christians occupy an odd space. We worship the God of the Jews, but we are not Jewish. We study the same prophets and patriarchs as in Judaism, and the chief target of our affections is a particular Jewish rabbi who was active in Galilee about 2,000 years ago. Our top scholar and the author of the bulk of our scripture was a zealous Jew named Saul, whom Christians call St. Paul. One could consider the situation a type of cultural appropriation on steroids, with 2.1 billion Christians around the world pledging allegiance to the God of 14 million Jews.

Jews, in my view, should think of Christians not as an enemy, but as a flawed ally. Mutual understanding can help us all. Taking Christian support of Israel at face value is a small step in the right direction.

Jarvis Best is the pseudonym of an attorney and writer living in Denver, Colorado.

Editor’s note: The author of this piece is not in a position where he can identify himself, due to the nature of his work. We felt this piece was significant enough to run in spite of this fact.