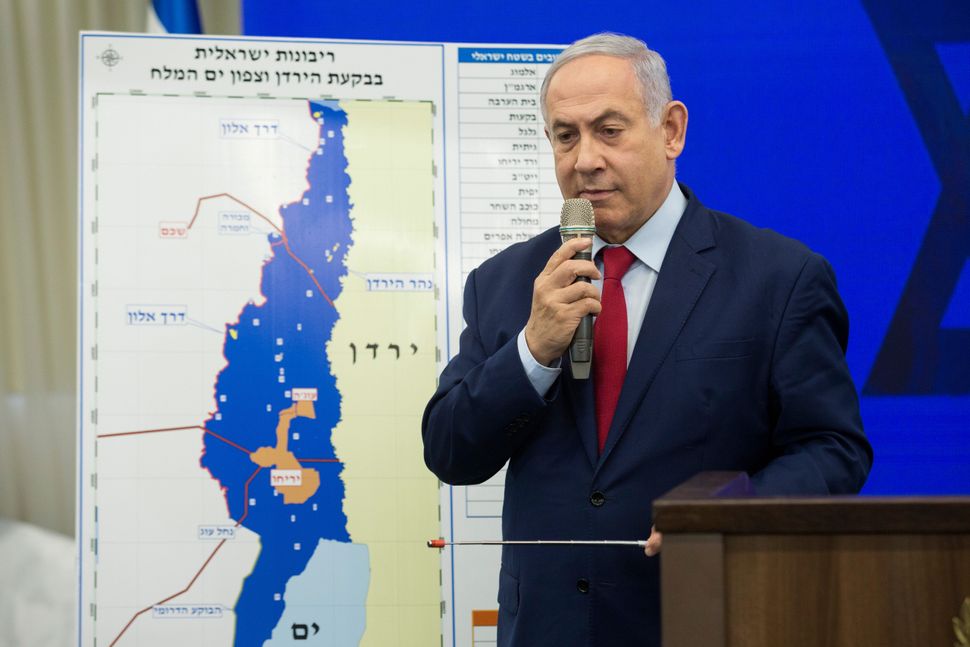 On Tuesday morning, Israeli Prime Minister Benjamin Netanyahu pledged that if reelected, he would annex the Jordan Valley and perhaps “other areas” of the West Bank.

Critics will say that by calling for annexation, Netanyahu is killing the two-state solution. But he’s been doing that for a decade.

He’s been doing it by subsidizing the communities in which settlers live, the industrial zones in which they work, the highways that ferry them back and forth across the green line and the military installations that protect them but not their Palestinian neighbors. It’s these facts on the ground, this expanding infrastructure of occupation, more than any formal legal status, that kills the two-state solution.

In the past, in fact, Israeli leaders like Ehud Barak and Ehud Olmert have proved as willing to negotiate the return of territory that Israel has annexed, like the Golan Heights and East Jerusalem, as territory Israel hasn’t, like the West Bank. They didn’t ultimately return those territories, of course. But what stopped them wasn’t law. It was politics.

Don’t get me wrong. I’m not suggesting that American Jews and American politicians greet Netanyahu’s announcement with a shrug. To the contrary, Netanyahu’s annexation proposal constitutes good news precisely because it increases the chances that Democrats will finally stop shrugging, and begin telling Israel that if it wants to brutally oppress millions of Palestinians who lack basic rights, it must do so without American money.

The Obama administration proved that lecturing Netanyahu about how misguided his policies are without making him pay a price for them doesn’t work. As Moshe Dayan once said, “Our American friends offer us money, arms, and advice. We take the money, we take the arms, and we decline the advice.”

The Trump administration has proved that telling Netanyahu whatever he does is fine doesn’t work either. The last three years have utterly eviscerated the claim, long favored by establishment American Jewish leaders, that only by offering Israel unconditional American support can the United States convince Israeli leaders to “take risks” for peace. In fact, the more lavish Trump’s support, the more brazen Netanyahu’s embrace of permanent occupation has become.

As Nathan Thrall details in his invaluable book, “The Only Language They Understand”, Israel has only moved toward territorial compromise when “forms of pressure”—either internal or external or both—”threaten significant costs.” Throughout the country’s history, “each of its territorial withdrawals was carried out under duress.”

Again and again during the Cold War, under Eisenhower, Ford, Carter and Reagan, American presidents told Israeli leaders that unless they ceded territory they were holding, America would restrict aid. And again and again, Israeli leaders complied. It is only since the cold war’s end, Thrall notes, that “the United States has not so much as considered using the sort of pressure it once did.” Which helps explain why America’s “achievements during the past quarter century have been accordingly meager.”

J Street, which has never before endorsed restrictions on American aid, has responded to Netanyahu’s announcement by saying the United States should not give Israel “a blank check to violate US interests and democratic values” and that the “annexation of any portion of the West Bank will lead to major consequences for the future of the US-Israel relationship.”

How can Beto O’Rourke, who has already called Netanyahu a “racist,” support giving him almost $4 billion in unconditional military aid? How can the New York Times editorial page, which has declared that under Netanyahu, “Israel is on a trajectory to become what critics say will be an apartheid state like the former South Africa”? How can the hosts at MSNBC?

Even Donald Trump will struggle to explain how an “America First” president can allow roughly one-quarter of American aid to Israel to be spent on Israeli weapons, thus creating jobs there and not here. Already, according to a University of Maryland poll this spring, 57% of Democrats support “economic sanctions” or “more serious action” if Israel builds new settlements. And that’s without virtually any validation of the idea from party leaders.

When the debate about American military aid begins, everything changes. As Hagai El-Ad, executive director of the Israeli human rights group B’Tselem has explained, “Perpetuating the occupation and paying no price for it – having it both ways – is Netanyahu’s single goal. Breaking the congruity of that mold is the biggest hope we have of finally ending the occupation.”

Now Netanyahu, because he thinks it will help him win reelection, has given Democratic politicians and American Jews the cover they need to begin making him pay a price. For that, he deserves our heartfelt thanks.