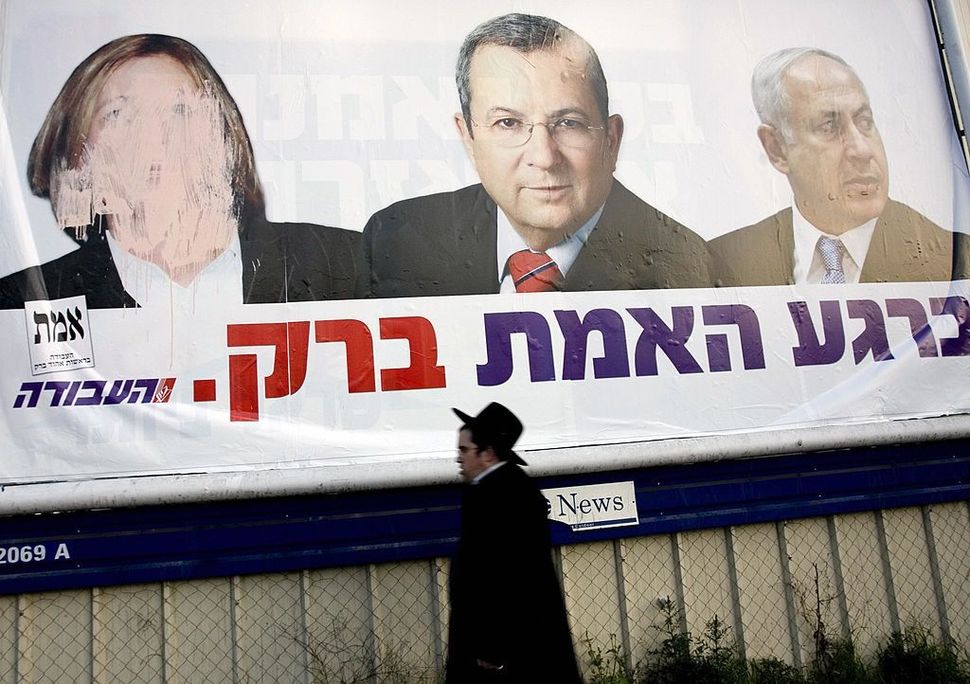 Tuesday’s election in Israel may seem like a straightforward choice, with right wing nationalist Israeli Prime Minister Benjamin Netanyahu challenged by the next biggest party, the head of the Center-Left bloc, Blue and White, helmed by Benny Gantz and Yair Lapid. But in truth, it’s a lot more complicated.

As we saw in April, the winner of Israeli elections is not the person who gets the most votes, but the person capable of building a coalition of 61 or more other Members of Knesset. And here, both Netanyahu and Gantz face a similar challenge, namely, that the parties they would need to form that coalition won’t sit in the same government together. Indeed, the conundrum of Israel’s future Prime Minister elect is best explained with the riddle of the farmer and the river.

It goes like this: The farmer has a sheep, a head of lettuce, and a wolf, all of which he needs to transfer from one side of a river to the other. The problem is, he cannot fit more than one of these at a time in his boat. He also can’t leave the lettuce alone with the sheep, who will eat it, nor can he leave the wolf alone with the sheep, for the same reason.

Netanyahu and Blue and White both have a similar problem. He may well have more than 61 potential members of Knesset who will support him as Prime Minister. But those members will not sit with each other.

Avigdor Lieberman, whose refusal to join the government in April caused the repeat election, built his campaign on insisting on a secular, [unity government]. In so doing, he split Netanyahu’s obvious coalition which would have united ultra Orthodox parties with nationalist right wing ones.

Lieberman’s attacks on the ultra-Orthodox and Modern Orthodox communities has fueled such ill will between the parties that, while the religious parties and Lieberman would all sit under Netanyahu, there is little chance either side will now sit with each other.

Netanyahu must therefore hope that the right wing parties, together with the ultra-Orthodox parties, achieve 61 seats in the elections; otherwise, he stands little chance of putting together a majority government.

Meanwhile, Gantz’s dance card is just as complicated if not more so than Netanyahu’s. Blue and White have made abundantly clear they will not sit with Netanyahu as Prime Minister. And even if they would, thanks to a number of attacks on the religious community in their party’s messaging, the ultra Orthodox parties have ruled out sitting with Lapid in particular, and possibly the list as a whole. The centrist, anti-Bibi block consists of the Joint List of Arab parties, that won’t sit in a coalition with Lieberman, a feeling that is quite mutual, and the left wing Democratic Union (Meretz plus Ehud Barak) and Labour-Gesher, who together are not likely to make up anywhere near enough seats.

The other spanner in the farmer’s boat — sorry, Netanyahu’s calculations — is Otzma, the Kahanist religious party which, as it stands, may or may not make it over Israel’s electoral threshold of 3.25% of the vote. If they do, it may well add a mandate or two to the right wing block. If they don’t, their votes will be distributed across the board, meaning they will benefit the left at the expense of the right.

There are just three possible outcomes, given the riddle Israeli politics have become. The first possibility is that Likud will be able to put together a right wing-religious coalition of 61 seats. Now, that’s nothing to crow about; 61 is a bare minimum. Having a coalition of only 61 means that every MK must be at every vote, come rain or shine. Nevertheless, given the fact that this is a repeat election and everything seems so tight, 61 will feel like winning with 100, and may well open the door to other factions to join in due course. Business is business after all, and the business here is politics.

The second possibility is that Gantz and Lapid will have to cave and join Netanyahu in a unity government. This will only happen if Likud achieves at least a five-seat lead. In that scenario, it is conceivable that Blue and White will turn to their constituency and say that for the good of the country, they have to find a way forward.

Given that the Prime Minister is due to have his pre-indictment hearing on the day the Knesset is to be sworn in, this seems unlikely. What is perhaps more likely is that Lieberman finds a way to work with the ultra-Orthodox. But one feels that the tensions there, as well as the resentment in the Likud for his pushing the people of Israel back into needless elections, will be too much of a stumbling block for this path too.

Finally, there is a third possibility, that Netanyahu will have to concede he is not able to form a government and step down. It is unclear how, but the Likud would then hold a leadership election, perhaps with an interim Prime Minister chosen by the President, and continue to govern.

So how does our farmer get his wolf, sheep and lettuce across the river? He takes the sheep over the river, leaving the wolf with the lettuce that the wolf has no interest in. Then he returns to bring the lettuce, deposits it on the other side, and puts the sheep back in the boat, bringing it back to the first side of the river. Next he brings the wolf to join the lettuce, and returns empty to bring the sheep on his final return.

Jason Pearlman is a political consultant based in Israel. He has served as foreign media advisor to the office of the President of Israel, and former minister Naftali Bennett among others.