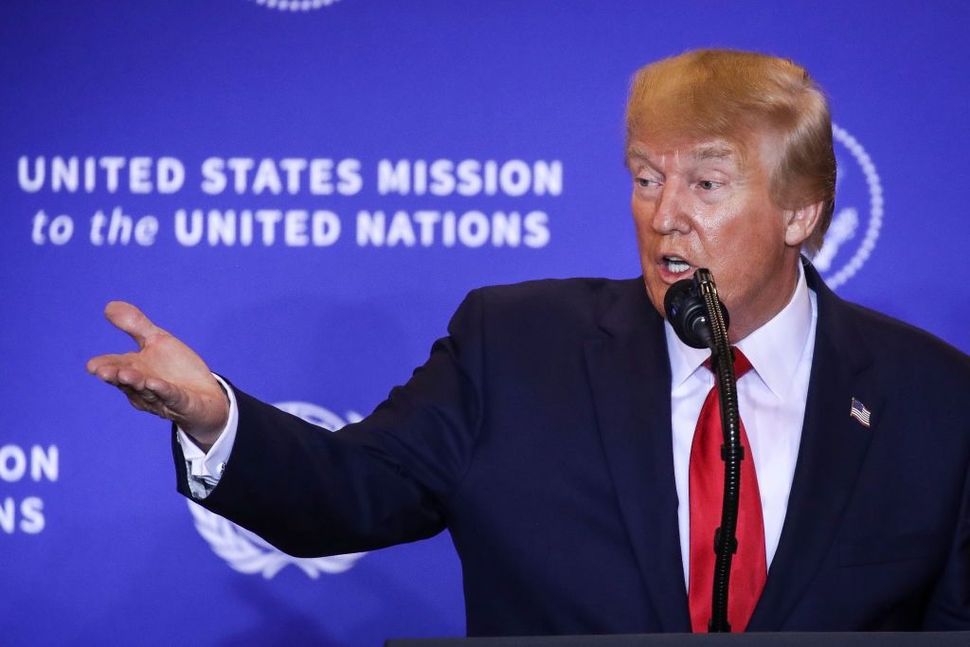 On Wednesday, Donald Trump again referred to House Intelligence Committee Chairman Adam Schiff as “shifty Schiff.” If you think that sounds vaguely anti-Semitic, you’re right. And it’s likely only the beginning. As the impeachment inquiry escalates, Trump’s anti-Semitic rhetoric probably will too.

It won’t escalate because Trump is any more hostile to Jews than he is to other religious or racial minorities. It will escalate because Trump thinks in terms of stereotypes. Thus, when challenged by an adversary, he often invokes bigoted tropes about their race, religion or gender. And for the next few months, as Trump’s presidency hangs in the balance, one of his biggest adversaries will be Adam Schiff, a Jew.

It’s no surprise that Trump called Schiff “shifty” — which means tricky or deceitful, or that in the past he’s called him “little pencil-neck.” When discussing Jews, Trump often plays on well-worn caricatures about cleverness, deviousness and physical weakness. He was quoted in 1991 as saying “The only kind of people I want counting my money are short guys that wear yarmulkes.” In 2015, he told the Republican Jewish Coalition that, “This room negotiates deals. Perhaps more than any room I’ve ever spoken to” but “you’re not going to support me because I don’t want your money.”

Trump does something analogous when challenged by African Americans. He responds with racist stereotypes about their supposed lack of intelligence. When LeBron James criticized him in an interview with Don Lemon, Trump called the CNN host “the dumbest man on television… He made LeBron look smart, which isn’t easy to do.” Trump even called Barack Obama “a terrible student” who didn’t deserve admission to Columbia and Harvard Law School.

Another favored Trump stereotype about blacks is that they’re poor and unsanitary. When Representative John Lewis announced he wouldn’t attend Trump’s inauguration, Trump declared that Lewis’s district was “in horrible shape and falling apart.” When Representative Elijah Cummings challenged Trump’s policies at the border, Trump called his district “a disgusting, rat and rodent infested mess.”

When women challenge Trump, he often calls them ugly. “Look at that face!” he exclaimed about Carly Fiorina in September 2015, when she was rising in the polls. “Would anyone vote for that?” When Morning Joe host Mika Brzezinski criticized him in 2017, Trump mocked her for “bleeding badly from a face-lift.” When Stormy Daniels sued him, he called her “horseface.”

And when Trump’s critics are women of color, he mixes and matches his stereotypes. Thus, when African American Representative Maxine Waters said Trump should be impeached, Trump called her not only a “seriously low IQ person” but also a “real beauty.” After Khizr Khan’s speech at the 2016 Democratic national convention, Trump suggested that his wife, Ghazala Khan, a Muslim woman, had remained silent on stage because “she wasn’t allowed to have anything to say.”

Trump has done something similar with the disabled. When New York Times reporter Serge Kovaleski disputed his claim that “thousands” of Arabs in New Jersey celebrated the 9/11 attacks, Trump mimicked the way Kovaleski — who suffers from arthrogryposis — moves his arms and hands.

Like many of Trump’s responses, the attack was a non-sequitur. The way Kovaleski moves his limbs, or the condition of Elijah Cummings’ district, or the size of Adam Schiff’s neck, have no bearing on their criticisms of Trump. They are simply a way of undermining his perceived adversaries by conjuring negative stereotypes about the group of which they are a part.

But they are dangerous. When Trump speaks, millions of Americans nod in fervent agreement.

Will one of them show up at a local synagogue looking to exact revenge on Trump’s shifty, pencil-necked tormentors, just as Robert Bowers last year went seeking revenge against the Jews who were supposedly facilitating what Trump often called an immigrant “invasion?” Probably not. But, all things being equal, I’d feel safer living in a country in which the president didn’t invoke anti-Semitic stereotypes at all.