Angry At Trump’s Syria-Withdrawal? He Learned His Foreign Policy From Obama 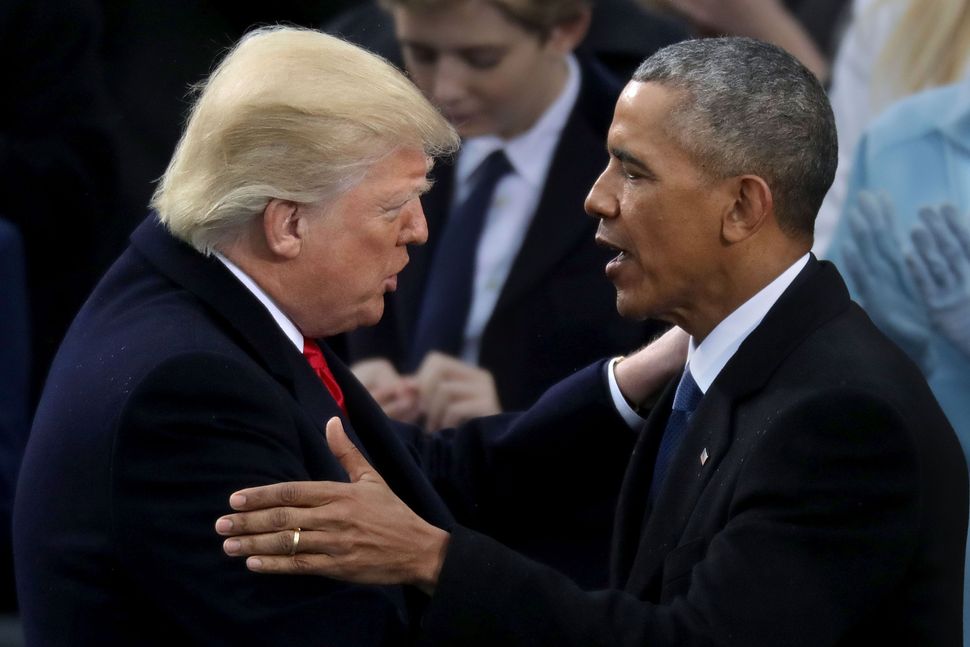 Donald Trump’s decision this week to abandon the Kurds in Syria to Turkey’s authoritarian leader Recep Erdogan is a warning to America’s friends facing dangerous enemies. Trump could abandon you in a New York minute. And so could Elizabeth Warren, Bernie Sanders, and even Joe Biden if one of them ends up as the next president. This is the new American bipartisan reality, which began in this century under Barack Obama, who jettisoned allies in pursuit of quixotic foreign policy projects. And it continues in an ever-cruder form under Trump, for whom today’s ally is tomorrow’s erstwhile friend.

Like his predecessor, Trump regards America as the victim of ungrateful and exploitative allies, bogged down in futile and costly wars that serve only foreign interests. The United States “defeated 100% of the ISIS Caliphate,” Trump tweeted on Monday, ignoring the essential role of the Kurdish forces. Yet Europe, he continued, which is dragging its feet on repatriating European ISIS fighters, is “thinking, as usual, that the U.S. is always the ‘sucker,’ on NATO, on Trade, on everything.”

…..again said “NO,” thinking, as usual, that the U.S. is always the “sucker,” on NATO, on Trade, on everything. The Kurds fought with us, but were paid massive amounts of money and equipment to do so. They have been fighting Turkey for decades. I held off this fight for….

This time, Trump stated, “Turkey, Europe, Syria, Iran, Iraq, Russia and the Kurds will now have to figure the situation out, and what they want to do with the captured ISIS fighters in their ‘neighborhood.’” America will “get out of these ridiculous Endless Wars, many of them tribal, and bring our soldiers home.” The U.S. military, he added, will no longer function “as a policing operation to the benefit of people who don’t even like the USA.”

It’s a remarkable choice of words. Just a few years earlier, Obama asserted that Saudi Arabia and the Islamic Republic of Iran “would need to find an effective way to share the neighborhood”; argued that America “must lead the world without becoming its policeman” (or “lead from behind,” as an Obama adviser recommended); and denounced U.S. allies as “free riders.” Meanwhile, Trump’s claim about the defeat of ISIS echoes Obama’s false statement that Al Qaeda “has been decimated,” and that ISIS is akin to a “jayvee team” – its influence limited only to “various local power struggles and disputes, often sectarian.”

In Obama’s view, the accord, formally known as the Joint Comprehensive Plan of Action (JCPOA), aimed not merely to curtail the nuclear threat – which it only did temporarily thanks to sunset provisions that would terminate many of its restrictions after 2025 – but to spur a strategic realignment in the Middle East. This would allow Washington to reduce its role as a regional powerbroker. The deal, Obama claimed, may spur the Islamic Republic to moderate its policies and enable Washington to work with the clerical regime on other issues of mutual interest.

“And the truth of the matter is that Iran will be and should be a regional power,” said Obama.

And so it increasingly became one. After the JCPOA’s implementation, Tehran used billions of dollars in sanctions relief to finance its military adventurism, particularly in Syria, where the regime in Iran and Hezbollah worked to preserve Bashar Assad’s grip on power. In fact, to secure his nuclear accord, Obama ignored his red line against the use of chemical weapons: He backed down when Assad and Vladimir Putin called his bluff. He also abandoned the Syrian opposition, famously mocking its members as “former farmers or teachers or pharmacists” who are unable to confront Assad militarily. The Washington Post fact checker gave Obama’s claim three Pinocchios, noting “that a substantial portion of the fighters are actually ex-military personnel.”

Obama had also mocked Putin as leading Russia into a Syrian quagmire when Russian forces, less than three months after the JCPOA’s conclusion, stormed back into Syria to keep the tottering Assad regime from collapsing. Instead of the predicted Russian debacle, Putin became the major domo of power politics, with Assad still in power and Middle Eastern leaders, including Israel’s Benjamin Netanyahu, facing a JCPOA-financed, Iranian-led military buildup on three borders, all jockeying for Moscow’s support.

And while increasing its hold on Syria, Lebanon, Gaza and Iraq to target Israel, Tehran increased its arms shipments to its Houthi proxies in Yemen, which subsequently fired missiles into Saudi Arabia, leading to an ill-prepared Saudi offensive. The Yemeni war has become a humanitarian catastrophe.

To his credit, Trump abandoned the Obama chimera of the Islamic Republic of Iran as a responsible power. But Trump, whose factual errors have thoroughly exhausted the Washington Post fact checker and confused allies and adversaries alike, has found another regional authoritarian to his liking: Erdogan.

Trump now seems to believe that the Turkish leader, who imagines himself as a new Ottoman sultan, not only will act with restraint in the absence of the U.S. military but also will serve as a check against Iranian power. More likely, Erdogan will partner with Tehran and Moscow to undermine American influence while massacring Kurds, driving them into the arms of the Russians and Iranians. By doing so, Trump will have removed America’s most effective fighting force against an ISIS resurgence.

Like Obama, Trump thinks that sanctions alone will check the ambitions of adversaries. On Monday, he tweeted that he would “totally destroy and obliterate the Economy of Turkey” if Turkey did “anything” he considers “off limits.” This mirrors his Iran policy, which today, like Obama’s between 2009 and 2013, is almost entirely dependent on sanctions as the sole instrument of American power.

As I have stated strongly before, and just to reiterate, if Turkey does anything that I, in my great and unmatched wisdom, consider to be off limits, I will totally destroy and obliterate the Economy of Turkey (I’ve done before!). They must, with Europe and others, watch over…

Thus, the Turks rightly have concluded that Trump lacks the fortitude for a sustained military commitment. They can draw the same conclusion as a result of Trump’s refusal to impose congressionally mandated sanctions for Ankara’s purchase of the Russian S-400 air defense system. Likewise, Trump has blocked U.S. penalties on a state-owned Turkish bank whose deputy CEO was convicted in New York for his involvement in a $20 billion Iran-sanctions busting case.

Trump’s withdrawal of U.S. forces will reverberate far beyond Syria’s borders. Notwithstanding the differences between Trump and Obama, U.S. rivals from the Middle East to the Indo-Pacific will conclude that presidential continuity persists in the one arena that matters most: disloyalty to allies. Call it the Trump Doctrine: If you’re a U.S. ally, Washington will support you if you do the fighting and dying to defend American interests and save American lives. You’ll get extra points if you pay for everything on your own. Then, once the job is finished, Washington will abandon you in the face of aggression by an authoritarian adversary.

In 2013, Qassem Soleimani, the head of the Quds Force, the foreign-operations arm of Iran’s Islamic Revolutionary Guard Corps, famously said, “We’re not like the Americans. We don’t abandon our friends.” Trump, like Obama, seems committed to proving the Islamic Republic’s most dangerous commander right.

Mark Dubowitz is chief executive of the Foundation for Defense of Democracies, where Tzvi Kahn is a senior Iran analyst. Follow them on Twitter @mdubowitz and @TzviKahn.

Angry At Trump’s Syria-Withdrawal? He Learned His Foreign Policy From Obama