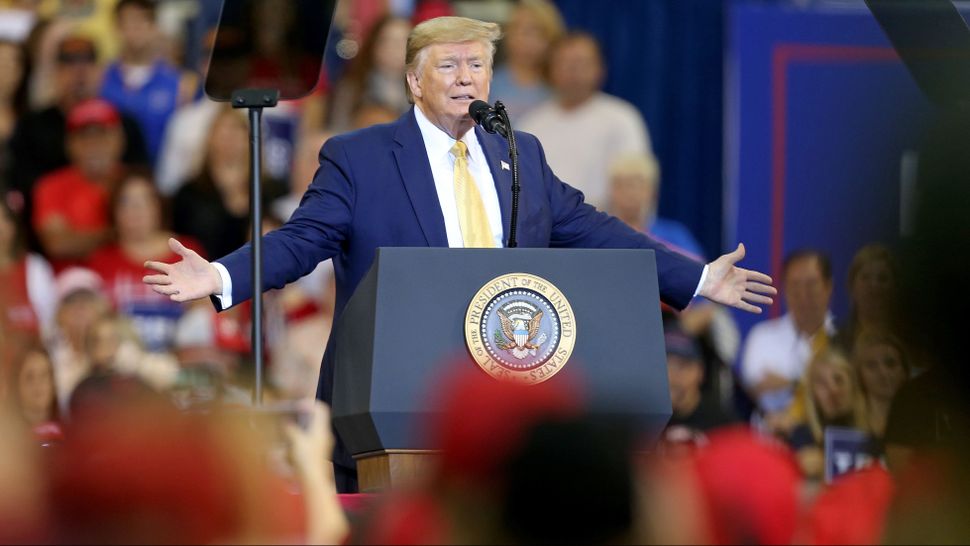 The last few weeks have been deeply troubling ones for our country. There is, of course, the ongoing impeachment drama involving an American president who, in an act of remarkable audacity, appears to have recruited foreign allies to join in attacking his political rivals at home.

This is profoundly disconcerting to many of us, to the large majority of American Jews who have always regarded Donald Trump as unsuitable for the office of president of the United States of America. But these past few weeks have been all the more troubling because of his behavior on the one issue on which many of you have staked your enthusiastic support for him: his strong commitment, as you see it, to Israel.

In fact, Mr. Trump has demonstrated recently a depth of unreliability that should scare even his closest friends. A telling early indication came in the wake of the second round of elections in Israel on September 17. When it became clear that his close friend and ally, Prime Minister Benjamin Netanyahu, had not won, Trump reversed all of his prior attempts to re-elect Netanyahu and remarking coldly that “our relationship is with Israel” — not, he was emphasizing, with Netanyahu.

But Trump had already demonstrated that friends are not really friends a few days earlier, on September 14, when Saudi Arabian oil fields were attacked by what most analysts believe to be Iranian drone missiles. As you know, Trump has made much of his friendship with Saudi Arabia and its de facto ruler, Mohammad bin Salman, with whom Israel has its own tacit security alliance. While there are new reports of an American cyber-attack on Iran, the absence of a public and forceful American response to this attack, following Trump’s usual bluster and empty threats, has forced virtually every American ally in the region to reconsider the worth of the President’s word.

Trump’s inaction was especially disconcerting to many Israelis, who believed that the United States would take an active role in resisting Iranian aggression. One Israeli nuclear expert, in observing the lack of American response to the Iranian attack, said that Israel was now vulnerable to a similar attack at its nuclear reactor site in Dimona, which, he suggested, should be shut down. The vaunted American security shield was no more.

But it gets worse. Trump’s infamous phone call with Turkish President Erdogan on October 6, in which he was persuaded to pull out all American troops from Northern Syria, calls into question not only the man’s sound judgment, but even more importantly the trustworthiness of America’s commitments to its friends.

Most upsetting is the speed with which he abandoned the Kurdish militias. Not only did he reveal no compunction about breaking a long-standing military alliance and leaving the Kurds to face off against the much more powerful and vengeful Turkish army; he made clear that he has nary a trace of sentiment for a small, stateless people seeking to gain a place under the sun in the highly fractious Middle East.

Students of Jewish history cannot fail to see close parallels between the case of the Jews and that of the Kurds. Both groups have demonstrated extraordinary resolve in staving off attempts at elimination and preserving their distinctive cultures and languages. It is no accident that the state of Israel has been one of the most forceful countries in support of Kurdish independence. In many senses, the Kurds are the Jews of today’s Middle East. They struggle as a dispersed people to achieve a measure of security and autonomy in the midst of hostile forces all around. Does this sound familiar?

If so, Trump’s lightning abandonment of them, revolving around the absurd claim that they weren’t with us at Normandy, should concern you greatly. He clearly was untouched by Turkey’s immediate attack on Kurdish-held areas on Northern Syria, which led to grave acts of violence against Kurdish soldiers and the release of hundreds of ISIS fighters. And he either was oblivious to or untroubled by the fact that he was effectively promoting Iranian interests in Syria following the overnight withdrawal, and thereby heightening the danger to Israel’s well-being on its northern border.

How can you keep pretending that Donald Trump acts in the best interests of this country and be a reliable ally of Israel? It is not simply that he is a transactional actor. It is that he is an amoral person for whom justice and virtue have no meaning.

As long as he regards the Kurds as more of a burden more than a benefit, he will drop them. Will Israel be next?

Let’s stop kidding ourselves. This man is a grave danger — to America, to Jews, and to the world. It is time to recognize that.

David N. Myers holds the Sady and Ludwig Kahn Chair in Jewish History at UCLA. He is also President of the Board of the New Israel Fund.