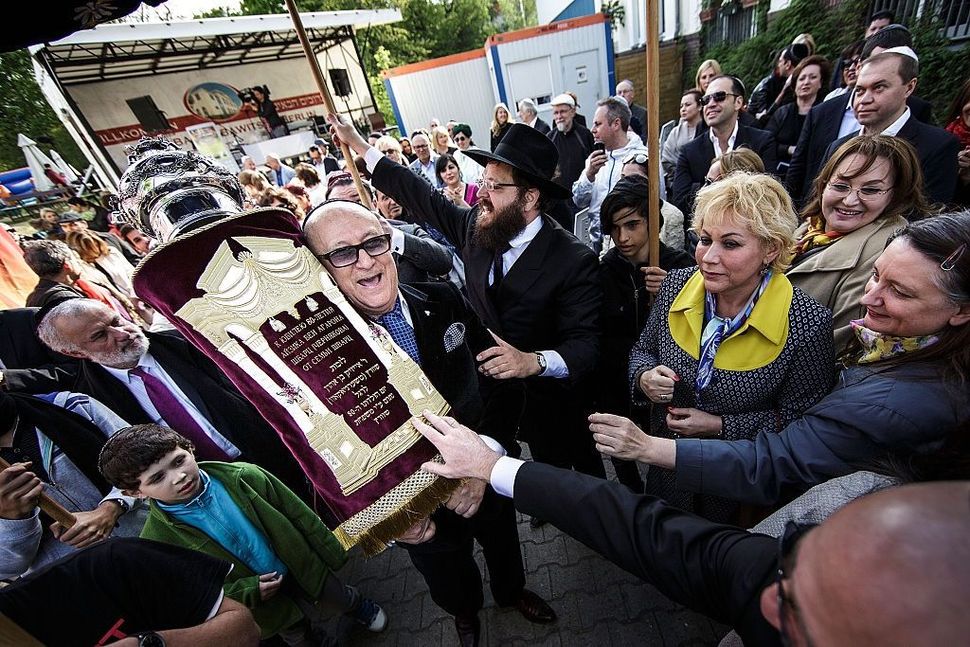 This piece is part of a series for the one year yahrzeit of the Pittsburgh Tree of Life synagogue massacre.

I write in the aftermath of an attempted massacre in Halle, Germany and in anticipation of the Yahrzeit of the Tree of Life tragedy, the worst antisemitic attack to occur on American soil. But for a strongly bolted door in Halle, this too could have been a tragedy of unfathomable proportions.

The most natural, if not logical, means of marking these difficult events would be for me, a historian of antisemitism, to lament the fact that this oldest hatred continues to grow, evolve, and develop on both the political right and the political left. I could show how the terrorists on the right — Halle, Pittsburgh, and Poway among others — are linked one to the other, despite the fact that none of them may know the other. They may not be personally connected. But they are not lone wolves. They all read the same materials, quote the same bloggers, post on the same websites, and share the same hatreds. In fact, in the day of the internet and social media, the concept of lone wolf is an anachronism.

Though the antisemitism of the right is more overtly violent, there is no dearth of antisemitism on the left. We see it in the leadership of the British Labour party, in the tweets and comments from people such as Representative Omar, in aspects of the BDS movement, in the intense contempt for and hatred of Israel, and in the way the identity of Jewish Holocaust victims is being removed from Holocaust commemorations.

Missing from the expansive and somewhat questionable list was any mention of Jews. After a firestorm of criticism, the UCU apologized and inserted Jews into the statement. But one has to ask what lead to the omission in the first place?

Today antisemites, including those who might have previously never dared to publicly utter their hateful thoughts, feel emboldened to do so. In fact, they feel more than emboldened. They feel that there is a vast swatch of public opinion and of world leaders who, though they may not say so openly, are sympathetic with their white nationalism, which includes anathema of Jews.

Antisemitism renders the Jew as “object,” what is done to Jews. It elides Jew as “subject,” what Jews do. I was reminded of this recently when a young man who had been my student for a couple of years showed up in my office wearing a kippah, something he had never done before. Though tempted to ask, “Hey, what’s up with the headgear?” I thought it inappropriate to do so. We discussed his paper and his post-graduation plans. As he rose to leave, he turned to me and, with a degree of enthusiasm, pointed to his head, and asked: “Did you notice the kippah?” Feigning a degree of nonchalance, I responded, “Oh, yes? That’s new isn’t it?” He quickly and proudly proclaimed that in light of recent attacks on Jews, he was intent on showing the perpetrators that they could not frighten him. “This is my response to those who hate us.”

I said nothing, but my feelings were decidedly mixed. I was proud of his hutzpah, his moxie and his refusal to cower in the face of threats (though he was facing none personally). But my heart broke because his motivation to identify as a Jew was prompted by the haters. He had ceded to them power over his identity. When they spoke out or acted against us, he upped his Jewish identity. He was motivated by the “oy” of Jewish life and not the “joy.”

In Pittsburgh, Poway, and Halle the intended victims were in shul when they were killed. At Tree of Life, they had arrived early, at the start of services. I assume that some had to say Kaddish or wanted to make sure there was a minyan present so that others could say Kaddish. For some of the victims the synagogue was their “club” and they loved being there. They rejoiced in seeing one another and spending a few hours together each Shabbat.

In Halle, after the attack, when police would not let those inside leave because the situation was not yet secure, the congregants continued praying, studying and singing. Subsequently when they were evacuated to a local hospital, they gathered in the cafeteria, completed their prayers with song and with dance. Then they broke their fast and drank beer.

It was an affirmation of Jewish life in the face of potential death. These Jews offer us an important lesson. Even as others rise up to us, we affirm our Jewish identity. While we stand guard — we would be crazy not to — we do so in order to be free to celebrate Jewish life in all its manifestations.

We are bearers of a magnificent tradition, one that expresses itself in religious, intellectual, philanthropic, artistic, communal, and political contexts. Despite the best efforts of so many generations of non-Jews to harm, kill, and even annihilate us, we celebrate the multi-faceted tradition that is ours and all it has given to the world. We do so, not because of the attempt to destroy us, but despite it.

We are so much more than victims.