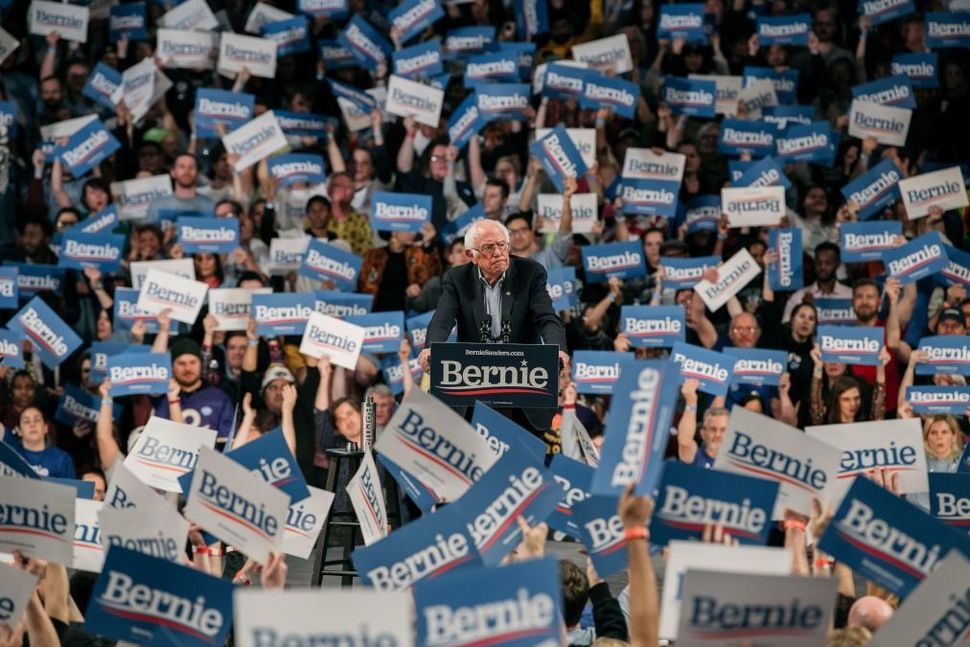 Senator Bernie Sanders at a rally, 2019. Image by Getty Images

You’d be excused if, like me, you felt as if Bernie Sanders‘s op-ed on Jews and anti-Semitism seemed oddly familiar.

A hundred years ago, in a country far, far away, a group of left-wing revolutionaries sought to win over millions of Jews with their universalist message. Jews, they said, should give up their particularist concerns for the sake of a better future for all. When the sun rises on that better future, they promised, Jews will live happily ever after, together with all the other oppressed peoples. Once we defeat the reactionary forces of the old regime, they claimed, anti-Semitism, too, will go into the dustbin of history. Join our struggle against the universal forces of oppression and your own concerns will vanish into thin air.

What did Jews have to do to join this glorious enterprise? They simply had to give up a few things that made them Jews: their “retrograde” and “oppressive” religious rites, their Hebrew and Yiddish, and their connection to the land of their ancestors — their Zionism.

To be sure, the specific oppressed groups that the revolutionaries of yesteryear sought to unite were different from today’s. Their description of the goal ahead was ever so slightly different from Senator Sanders’s “shared future of equality, peace, prosperity, and environmental justice.” (I used to hear something very similar in my own socialist childhood — minus the ecological bit.)

But as far as the role of the Jews and the solution to the particularly Jewish problem of anti-Semitism, the idea was very much the same. Give up a bit of your attachment to Israel. Join our agenda. Be like us, and we will fight anti-Semitism for you. “The forces fomenting anti-Semitism are the forces arrayed against oppressed people around the world,” wrote Senator Sanders, so let’s fight this together.

History has shown how disastrous these kinds of promises turned out for the Jews the first time around. Those Jews who joined the revolution were tasked with persecuting their own people. (After all, no one could accuse the revolution of anti-Semitism when it had Jews fighting for it.) When they had done their job, they themselves went into the dumpster, despised both by those they served and their own people.

Thirty years after those promises were first made, Soviet Jews — and it is they, of course, that I’m talking about — found that anti-Semitism was still part of their lives. But their Jewishness was now gone, leaving them with fewer resources than ever to stand up for themselves.

The only thing that saved Soviet Jews in the end, was a return to their Jewish particularism: remembering what it really meant to be Jews. This particularism started coming back in the 1960s, ‘70s and ‘80s, thanks to the courageous Jewish men and women, known in the West as “refuseniks” and “Prisoners of Zion.”

The drama of their struggle preoccupied a generation of American Jewry and was fought out on Capitol Hill, at the White House, and in the UN. But the overt objective of that struggle — freedom to emigrate — obscured something far more significant: the recovery, for hundreds of thousands of Jews of the meaning of their Jewish identity, including their connection to their ancestral land.

It became clear as day to them that the government’s anti-Zionist rhetoric fueled the very anti-Semitism it claimed it was fighting. And once they understood it, there was no turning back.

Three decades after 1.5 million of Soviet Jews began to make their way out of the socialist motherland, we are still recovering as a people from that far-left universalist adventure. Tragically, we came out of it like the fourth child at the Passover Seder: knowing so little about Jewishness, we didn’t even know what questions to ask.

We are still reconstructing what exactly had happened to those of our people — 2.8 million — who found themselves in Ukraine, Belarus, Moldova, and some parts of Russia during the Shoah. We are still recovering our history, which we gave up in the service of the “greater good.”

Senator Sanders: I want to believe that you genuinely want to contribute to fighting anti-Semitism rather than simply using its rise for your political agenda. If you do, you’ll need to show us why this time we won’t lose everything dear to us the way we did the first time around.

Since you are staking a claim in the fight against anti-Semitism, I want to know more about what you have done in the past to do that. Where were you, for example, when the Soviet Jews saw our best and brightest thrown in jails, sent to the gulag, harassed, and deprived of their livelihoods just because they wanted to be Jews in the full sense of the word? Did you march with the American and Israeli Jews who were fighting for them? Did you, perhaps, address their plight with your Soviet counterparts when you visited the Soviet Union in 1988? It would significantly strengthen your case if we were to learn that you were on the frontlines of that great struggle against that oppression and persecution of our people.

You chose to build your op-ed around your Jewish background. Soviet Jews’ experience shows better than most that Jewish identity alone means little in terms of where one stands vis-a-vis one’s people. In the end, one’s stance is proven only through actions.

In that regard, I would like to know what you are going to do to fight the anti-Semitism on your own side of the political spectrum, the examples of which are now too numerous to recite. Some of them are listed in the very book from which your oped borrows its title: Bari Weiss’s How to Fight anti-Semitism.

Accusing those who point out anti-Semitism on the left of “using a cynical political weapon against progressives” won’t change the truth that we see with our own two eyes: that just as Soviet anti-Zionist rhetoric multiplied anti-Semitism for Soviet Jews, the anti-Zionist rhetoric of the progressive left today does that for American Jews in our time.

Senator Sanders, you have made a bold claim in suggesting that you know how to defeat anti-Semitism. Jewish historical experience with the far-left is not on your side. You will need to add much more heft to your promise before many of us will believe you.

You know the old cliche: Fool me once… This Jew, for one, won’t be fooled a second time around.

Izabella Tabarovsky is a writer who lives in Washington, DC. Opinions expressed in this piece are her own and do not reflect the views of her employer.