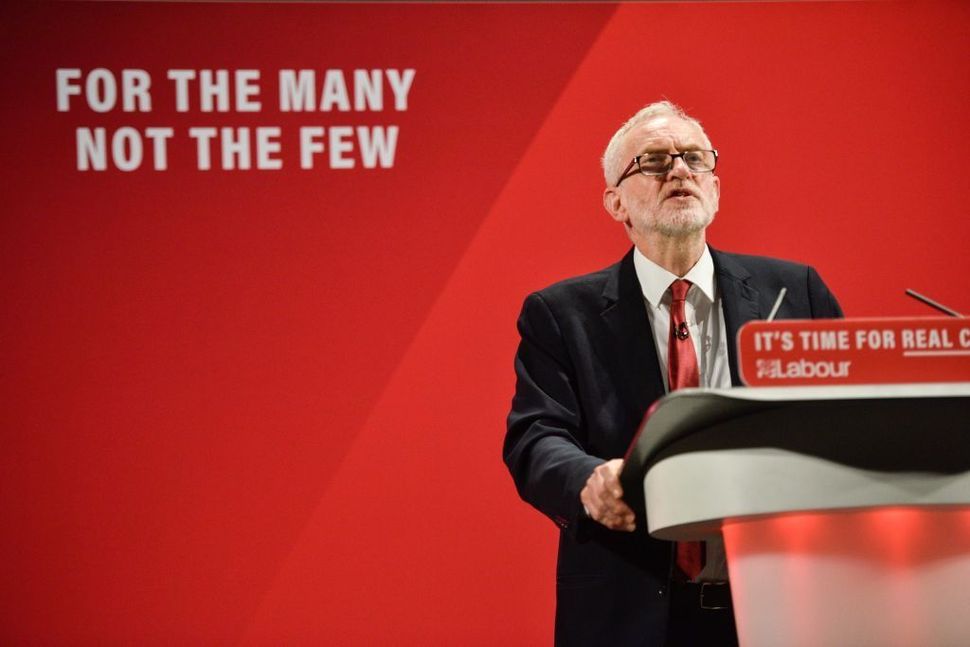 Britain’s Chief Rabbi Ephraim Mirvis op-ed, published in the Times of London on Monday, reads as if it were written by a man who didn’t want to write the piece but believed he had no choice.

“Convention dictates that the Chief Rabbi stays well away from party politics,” Mirvis writes, but “challenging racism” — specifically, anti-Semitism within the Labour Party — ”is not a matter of politics.” “A new poison — sanctioned from the top — has taken root in the Labour Party,” Chief Rabbi Mirvis concludes: the poison of anti-Semitism. The words in the final paragraph in particular feel as if they were agonized over: “It is not my place to tell any person how they should vote. I regret being in this situation at all. I simply pose the question: What will the result of this election say about the moral compass of our country? When December 12 arrives,” the date of the forthcoming British general election, “I ask every person to vote with their conscience. Be in no doubt, the very soul of our nation is at stake.”

It is, by all accounts, an extraordinary intervention in British politics by the Chief Rabbi.

This is utterly unprecedented.

To my knowledge, no Chief Rabbi of this country has never made a comparable statement to this, before any election.

Though in 2018, Chief Rabbi Mirvis’s predecessor, Rabbi Jonathan Sacks labelled Corbyn an anti-Semite, comparing him with the notoriously racist Conservative politician Enoch Powell, Rabbi Sacks would not have written such an oped. Chief Rabbi Mirvis’s op-ed is, then, entirely without precedent, and a sure a sign as any that, as if it were possible, the Labour Party’s anti-Semitism crisis and relations between the party and British Jews have reached a new nadir.

Britons will go to the polls two weeks from now and the conversation among those engaged on one side or the other regarding Labour’s institutional anti-Semitism has become evermore polarized and entrenched.

Indeed, as if it were a kind of Rorschach test, Chief Rabbi Mirvis’s appeal was either received as a sign of a deep moral crisis within the Labour Party or, as a Labour outrider and activist disgracefully argued this morning, comes from an “uncritical supporter of Netanyahu” who allegedly opposes Corbyn’s politics on Palestine.

Holly Rigby is an uncritical supporter of Chris Williamson & Pete Willsman & agrees with the former that the Labour Party has been “too apologetic” over antisemitism.

Her comments must be taken in this context. https://t.co/5uyWTDW39d pic.twitter.com/0BEj1qpzcv

Within the bubble, minds are made up. There is for Corbyn supporters no critique of the man that can be made in good faith.

The heat of the campaign, a time when minds are concentrated and the prospect of a Corbyn-led minority government does indeed seem more real, is clearest in the media and online. Throughout November, damning new evidence of Labour’s anti-Semitism was uncovered, including Corbyn’s embrace in 2008 of a speaker who claiming Zionism made Jews “immoral” and a Labour Member of Parliament who reportedly sang “Hey Jews” to the tune of the Beatles’ “Hey Jude” during a raucous, late-night bus journey in 2018.

For years now, British Jewish concerns about Labour’s anti-Semitism have been denied, dishonored, and dismissed. Chief Rabbi Mirvis’s op-ed reflects that trauma. “The question I am now most frequently asked is: What will become of Jews and Judaism in Britain if the Labour Party forms the next government?” he writes. And by publishing his thoughts in the Times of London, he intends to address not those in the aforementioned bubble but the country at large, to persuade people to consider Corbyn’s proximity to anti-Semitism and associations with anti-Semites when they go to the polls on December 12.

As election day approaches, however, Chief Rabbi Mirvis’s ability to persuade diminishes, the power of his words colliding with the realities of British electoral politics. Since late October, Labour have strengthened in the polls somewhat, as voters in seats up and down the country come to terms with the often unpleasant and unpalatable choice of whether to vote for the anti-Semites or the Islamophobes, Labour or the Conservatives. Oftentimes, the decision to vote for the one is taken simply in order not to vote for the other. To vote with one’s conscience, as Chief Rabbi Mirvis rightly asks, is a luxury many voters sadly do not have.

And indeed, outside the bubble, the conversation may have moved past the Chief Rabbi. Nationally, though anti-Semitism is indeed a part of public debate, the election is being fought more so on the rather traditional terrain of healthcare, social security, and public services and, of this occasion of course, Brexit.

The Chief Rabbi’s extraordinary eleventh-hour intervention will, at least for a day, place Labour’s anti-Semitism crisis front and center — though, one fears, not for long.