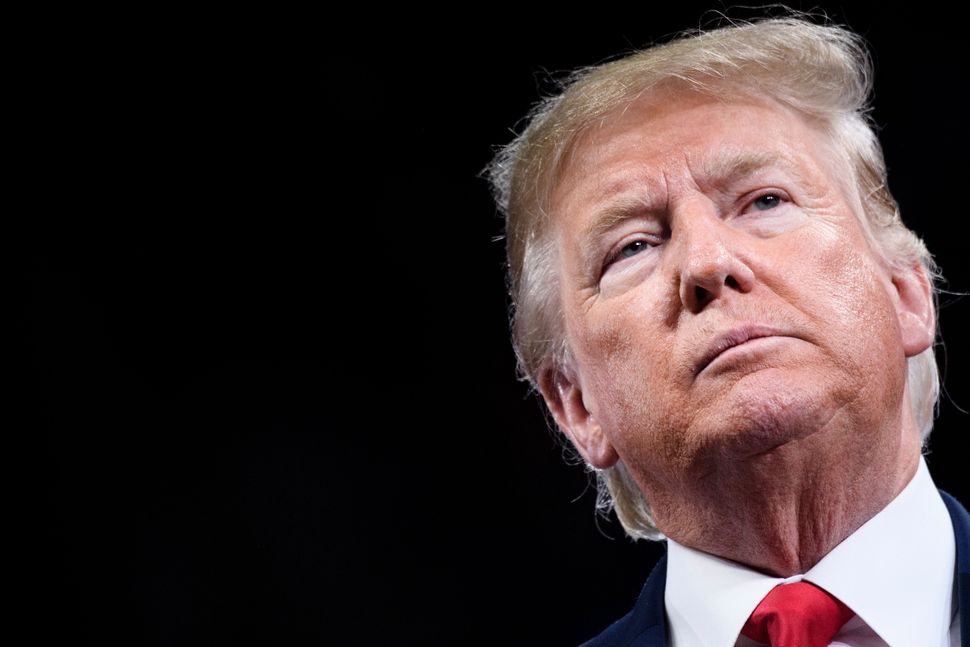 US President Donald Trump speaks during a Keep America Great rally at the Giant Center in Hershey, Pennsylvania on December 10, 2019. Image by Getty Images

On Tuesday, the New York Times revealed that the Trump Administration plans a new executive order that aims to crack down on college campus anti-Semitism and anti-Zionism, penalizing universities for failing to protect Jewish students.

You may feel as I do that college campuses have gotten increasingly — and inexcusably — anti-Semitic in recent years. But this executive order is not “good for the Jews” as the saying goes. That’s because any anti-discrimination order by this particular president is bad for the Jews, for one simple reason: It further identifies us with an anti-democratic administration.

I understand the extent of the problems faced by Jewish college students who are intimidated, bullied, harassed and worse for speaking up as Jews who support the existence of Israel. Anti-Semitism is absolutely masquerading as anti-Zionism on college campuses. Jewish students absolutely need to be protected from anti-Semitism.

But this executive order by Trump is not the way to pursue that protection.

For starters, though the Times reported that this is being done at the behest of Trump’s Orthodox Jewish son-in-law, Jared Kushner, it’s being done for Jews. Remember, despite what the anti-Semites say, Jews are an insignificant voting block. It’s Christian evangelicals who represent Trump’s core supporters and they are strong supporters of Israel’s right wing, for a mix of eschatological and political reasons. It’s the 80 million evangelicals that Trump is actually courting when he issues his pro-Israel orders, not the Jewish community, who by and large have rejected him. In many ways, Christian evangelicals dictate the priorities of the Trump administration, and they are also increasingly presuming to “speak for the Jews,” which then tends to confirm the anti-Jewish mythology of outsized power.

But evangelicals take on none of the risk associated with this order and with other anti-BDS laws; it is the Jews, the supposed beneficiaries of these orders, who get called anti-free speech.

The truth is, anything coming out of this administration is so deeply embedded in Trump’s assault on democracy that merely being associated with it presents a risk for a vulnerable minority like the Jewish community.

Moreover, Trump’s attempt to “protect” Jewish students will only alienate them, separating them out and putting them at odds with their peers. There is a whiff of special protection in all of this, as with Trump’s other attempts to put Israel front and center. It separates us out from other Americans, rendering us other when nothing could be further from the truth. My father escaped the Holocaust when he was four years old and served in the 101st Airborne in Vietnam. My brother is a US Marine who served in Iraq. Our religion, our belief system, even our ethnicity is Jewish. But our nationality is 100% American.

When a bigoted president thinks nothing of deporting US military veterans who have lived in this country most of their lives, pardon me for being wary.

Trump has never come across a racial, ethnic, or religious stereotype that he did not believe, and that includes Jews and money, and Jews’ dual loyalty to Israel and the United States. The whole premise of this executive order reconfirms Trump’s repeated statements that Jews really should have dual loyalties or else they are “traitors.”

Believe it or not, Jewish students will survive college. And the way to combat anti-Semitism on campus is not to alienate Jewish students from the nation they call home — America. Nor is it to continue this top-down assault on pro-Palestinian activists from the most powerful office in the world, even when they sometimes veer into anti-Semitism.

The way to make Jewish college students safe is to continue to host speakers of all points of view and change minds the old-fashioned way. Make sure students are safe, of course, but college is where you are allowed to be loudly, boldly wrong along the way toward adulthood.

Correction: An earlier draft of this piece relied upon a New York Times article which falsely claimed the executive order classified Jews as a nationality.