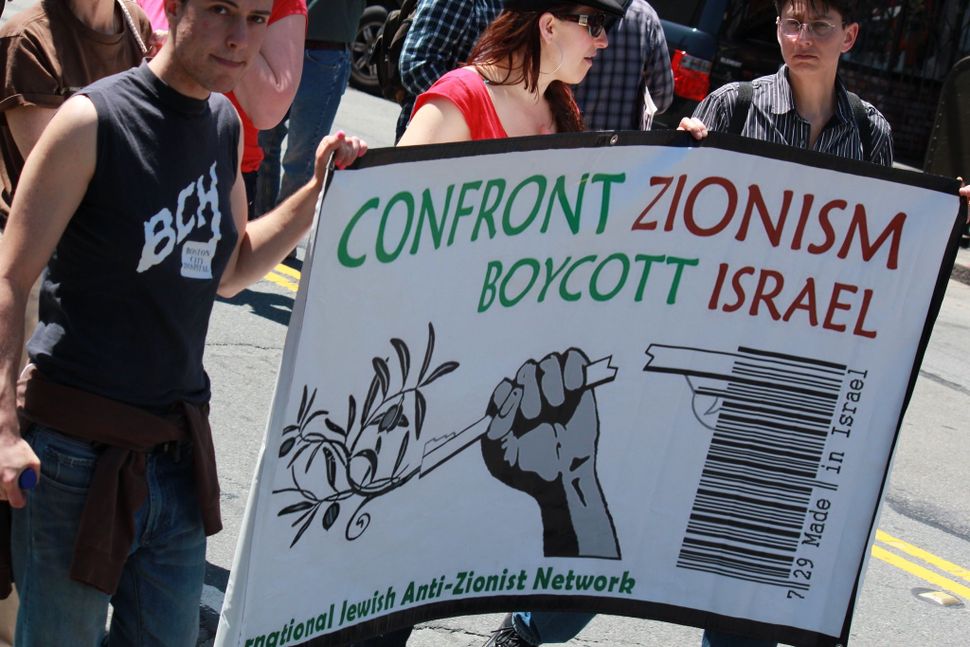 The International Jewish Anti-Zionist Network carry a sign at the 2011 May Day Rally and March, San Francisco.

But these two Jewish constituencies don’t just disagree about Zionism. In fact, without quite knowing it, they are speaking past each other. In the great 21st century debate about Zionism vs. anti-Zionism, the most important aspect of the conversation has been simply abandoned by the wayside. And it’s the one thing that could help end the stalemate.

A recent debate on the pages of Dissent Magazine provides a good example of this phenomenon. It began with an essay by editor emeritus Michael Walzer called “Anti-Zionism and Anti-Semitism: What’s Wrong with Anti-Zionism is Anti-Zionism Itself.” The piece was a defense of Zionism through a methodical rejection of all the anti-Zionist arguments currently flourishing on university campuses and on the anti-Zionist Jewish left, which Walzer argues all seem to contain a hint if not a flavor of the anti-Semitic trope about them. People reject Zionism, writes Walzer, “because the Jews aren’t a people; because they should be more cosmopolitan than anyone else; because the Zionist state has had some terrible governments; because no one should have a state (even if almost everyone does).”

Per Waltzer, is at least possible if not likely that those making these arguments “also believe that Jews ran the slave trade, that the Zionist lobby controls U.S. foreign policy (as Representative Ilhan Omar has said), that Jews are disloyal to every country in which they live except Israel, and that Jewish bankers control the international financial system.” And it takes a kind of willful ignorance on the part of leftist anti-Zionists to think they can hold these views independent of those ugly tropes.

Walzer’s piece received a response from Joshua Leifer, an associate editor at Dissent, who dismissed Walzer’s argument as “hypotheticals and counterfactuals.” Walzer missed the point, Leifer writes. A “values-based approach” would start with “the political reality” of a greater Israel made up of Jews with full rights, and Palestinians “who live under a range of oppressive systems,” and would lead anyone who takes seriously “the values of freedom, democracy and equality” to reject Zionism.

Walzer replied in a second piece that Leifer has done exactly what Walzer warned against, reducing all of Zionism to whatever the Netanyahu government happens to be doing today. Leifer failed to see that “only liberal and left Zionists and liberal and left Palestinian nationalists… can shape a decent peace — each group recognizing the rights of the other.”

Leifer’s rebuttal of Walzer’s rebuttal has not yet come. But one suspects that when it does, he will argue that Walzer missed the point.

And there you have it: Leifer and Walzer are two brilliant men. They are both ivy-leaguers, leftists and Jews with a wide world of shared values (“freedom, democracy and equality” are just the start), and still, the distance between them, when it comes to Zionism, is so great that they can only write past each other.

In almost every way, they are fellow travelers; about Israel they are strangers. But why?

For one thing, because while they debate political facts and moral principles, a lot of what is really at stake goes unmentioned: the emotional truths that undergird each side’s position.

As a case in point, think about the one kind of anti-Zionism that Walzer’s typology omits — the one that probably makes the most sense to young Jews like Leifer (and still younger Jews on college campuses): the anti-Zionism that grows out of resentment at being misled about Israel as a kid, and taught to believe Israel is better — more decent, humane and progressive — than it really is.

This sense of betrayal is undeniably a huge catalyst for much of the anti-Zionism in the young Jewish left today. Think of the members of the Jewish anti-occupation group IfNotNow who protest Zionist organizations with placards that read “Stop Lying to Us” and “We Demand the Truth.” A site called YouNeverToldMe.org posts what they refer to as testimonies by Jewish kids about how their parents, teachers, rabbis and counselors deceived them about Israel. “I felt defeated and lied to,” one says. “I could not believe how much unlearning was ahead of me.” Another: “I honestly felt ashamed and manipulated by a school I had loved and trusted.”

This is the anti-Zionism of many Jewish kids on college campuses: It comes from feeling duped.

And there’s more to it than just this. These kids are anti-Zionists because the Zionist indoctrination they complain about worked. Israel matters to them, just like their parents hoped it would. They watch videos of soldiers firing on teenagers throwing rocks, horrified by the fact that alongside the sympathy they feel for the powerless children with stones they also feel a tug of identification with the ones in the uniforms.

“You emotionally manipulated me into believing that Israel was the moral and ethical superior to all other nations,” one young Jewish woman wrote on the YouNeverToldMe site. What do Walzer’s arguments offer her?

But neglect of the angst of young Jews’ anti-Zionism exists in the other direction, too. Leifer also fails to see that a debate about Zionism is inescapably more than a matter of principles and policies. He writes that “a Jewish state that is not a democracy is not a state worth having,” with no understanding of how frightening and vicious these words are to people who witnessed the mass dispossession and exile and genocide of Jews, or grew up with grandparents who had such stories to tell.

Leifer, like many young anti-Zionist Jews, is blind to the things in Israel that produce in many Jews an atavistic pride. One feels often that young American Jews don’t understand that much about Israel — the Hebrew language in the streets, the settling serenity of Shabbat, the street signs commemorating Jewish scholars long forgotten in countries of their birth — resonate for many Jews. Their Israel is emotionally uncomplicated: a colonial, fortress state where Jewish privilege is vampirically sustained by the blood of Palestinians.

This cold characterization leaves no room for the warm affinity many Jews feel for the place. The strict moralism of the anti-Zionist left — If you care about freedom, democracy and equality, you won’t care about Israel’s survival — is an assault on affinity itself.

Philosopher Martha Nussbaum teaches that to do politics right, constructively, we need to pay attention to “political emotions.” She writes that “love is what gives respect for humanity its life, making it more than a shell.” In the Dissent debate, like in discussions of Zionism that take place every day, on campuses, around dinner tables, on Facebook and in the pages of the Forward, what’s missing is compassion for political emotions.

It is a debate about what our parents should have told us but didn’t.

It is a debate about the lives our grandparents should have lived but couldn’t.

It is a debate about what we value and what we fear.