Democrats should go to AIPAC – and speak truth to power 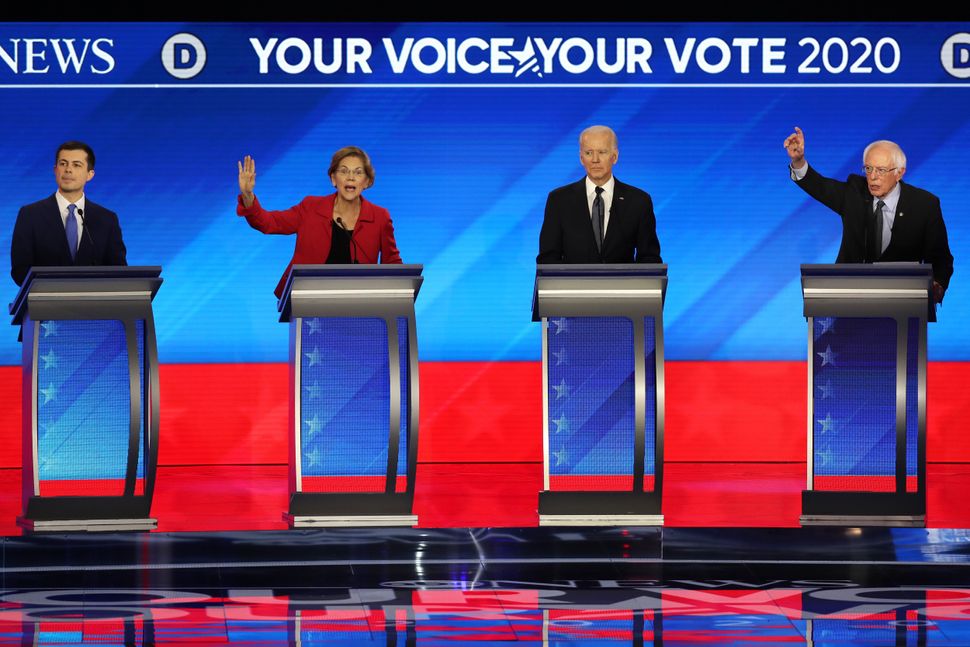 Last Thursday, in response to a question at a televised town hall, Senator and presidential candidate Elizabeth Warren said she would not attend the American Israel Public Affairs Committee’s annual policy conference, scheduled to take place at the beginning of March.

The person who posed the question, Sarah O’Connor of the Jewish leftist group IfNotNow, was not only expressing a personal opposition to Democratic candidates attending or speaking at AIPAC’s big event, a platform that until recently no intelligent candidate would forgo. IfNotNow, along with MoveOn.org, Indivisible, and the Working Families Party have launched a campaign to persuade the Democrats’ presidential contenders not to attend.

But the demand that candidates skip AIPAC sets up a false binary, namely, that attending AIPAC’s confab this year is an effective endorsement of their agenda, while skipping it a repudiation. And it’s a shame that this is the debate now taking place among progressive activists, when there is, in fact, another option Democratic candidates should consider: Go to AIPAC and tell the audience the truth they would prefer not to hear, that if a Democrat is elected in November, the Trump cotton candy cart is coming to a full stop. In fact, this third option would send a much stronger message than simply not attending.

Candidates hesitating to attend AIPAC have good reason. The conference takes place in the days before and on Super Tuesday, when 14 states and Democrats Abroad will vote in primaries, providing a convenient excuse for presidential hopefuls for not being there.

Then there’s the fact that days after the Iowa Caucuses and before the New Hampshire primary, AIPAC bolstered the case of Democrats inclined not to go by clumsily attacking members of the party with Facebook ads, which it later admitted were a mistake. Rep. Betty McCollum, a Minnesota congresswoman long critical of Israel’s human rights record in the occupied territories, and one of the targets of the AIPAC ads, accused the group of incitement.

And of course, there’s AIPAC’s plenary session, where profuse praise of President Donald Trump’s recent diplomatic decisions heavily favoring Israel at the expense of Palestinians is likely to be frequent and boisterous. This part of the event is not known for nuance, and for now, President Trump is the undisputed toast of the cause.

But despite the bad optics of the plenary, the AIPAC conference remains the most high profile opportunity for the Democratic candidates to explicate their Middle East policy positions. The conference provides a unique opportunity for candidates to distinguish the Democratic position from that of the Trump administration, and convey the very real risks associated with brash moves like annexation. They should not squander such an opportunity.

Furthermore, as many AIPAC supporters in the Democratic Party point out, there is more to the annual conference than the plenary. There are breakout sessions, networking opportunities, lobbying appointments, and off-site meetings where thoughtful and serious discussions take place.

These are all opportunities to convey a crucial message to the AIPAC audience: the Trump status quo won’t fully carry over into even the most moderate Democratic administration.

In terms of Israel policy, the Trump administration has fulfilled all the empty promises made by Democrats and Republicans to AIPAC and other pro-Israel audiences — on Jerusalem, recognition of the Golan Heights, a lax policy on the settlements, punitive sanctions on the Palestinian Authority, slashing all funds to UNRWA, and a hawkish posture towards Iran. The administration’s so-called peace plan was widely viewed as yet another gift to Israeli Prime Minister Benjamin Netanyahu, so favorable was it to Israel.

But a Democratic administration interested in re-engaging the Palestinians will have to roll back several of these “wins” for the pro-Israel lobby. It won’t be necessary to reverse the moving of the U.S. Embassy to Jerusalem, but some semblance of evenhandedness in America’s mediating role will have to be restored.

If a candidate is only willing to participate in the usual AIPAC pageantry, it may be best not to appear at an event that is sure to be an uncritical celebration of Trump. But if they’re willing to lay down the marker for the Democrats’ distinctive pro-Israel message, one that centers the two-state solution and regards the Palestinians as a people worthy of dignity and proper statehood, it may be worth the trip and the hisses that will follow them into the Washington Convention Center.

Abe Silberstein is the Associate Director, North America, of The Abraham Initiatives, an Israel-based NGO working to achieve equality between Jewish and Palestinian citizens of Israel. He tweets @abesilbe. His views and opinions do not reflect those of his employer.

Democrats should go to AIPAC – and speak truth to power