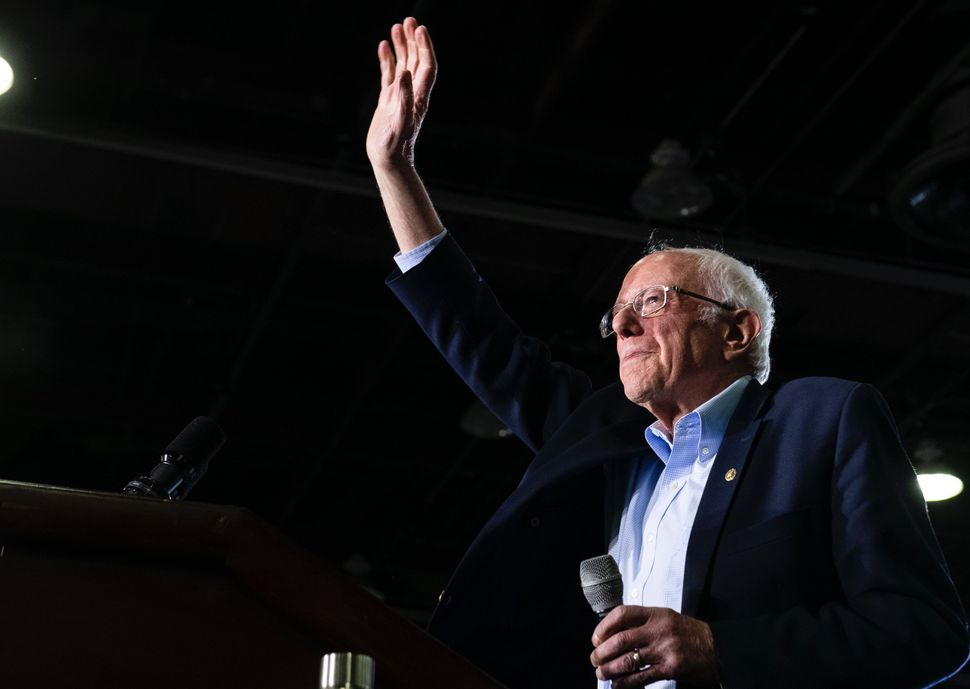 Despite his promise this afternoon that he will continue to fight for the nomination, the Bernie Sanders presidential campaign died last night. He may soldier on and win one or two more states before this is all done. But the competition is done. Unless something totally unexpected happens, Joe Biden will be the 2020 Democratic nominee. For now, at least, the dream of a Jewish president is dead.

But the truth is, Sanders was never able to fully embrace that dream, something that was fully on display in his reaction to a swastika flag that a white supremacist unfurled at a rally last week in Arizona.

The most successful Jewish presidential candidate in US history was bound to become a target for neo-Nazi hate. But Sanders reaction was telling: He posted a video saying he was disgusted and shocked, “not only as a Jewish American. I think I can speak for the families of some 400,000 American troops who died fighting Nazism, fighting fascism.”

As someone whose family was wiped out by Hitler and as an American, to have in this country somebody bringing forth the most detestable symbol in modern history is unspeakable. pic.twitter.com/0TySmmxhgh

The quick pivot to his American identity, away from his Jewish one, while discussing a symbol of Nazi hate, told you everything you needed to know about Sanders’ discomfort if not with his Jewish identity, than with making it a central part of his public persona.

That discomfort has always been there. Sanders began by barely talking about his Jewish identity at all during his 2016 campaign; in his first political memoir, the word “Jewish” only appears twice, once in the context of his family voting Democratic “as did virtually every other family in our Jewish neighborhood,” and once in a reference to “the Christian and Jewish soldiers we sent to defend Kuwait” during the first Gulf War.

He even went so far as to identify himself in 2016 as “the son of a Polish immigrant who came to this country speaking no English and having no money,” perhaps in a statement of attempted solidarity with the white working class – even though, as one rabbi pointed out, “Nobody in Poland would have considered Bernie a Pole.”

By 2020, Senator Sanders’s strategy had shifted somewhat, and he began releasing campaign videos about how he was “proud to be Jewish,” and talking openly about how his Jewish family members’ deaths in the Holocaust were formative to his worldview.

I’m very proud to be Jewish and I look forward to becoming the first Jewish president in the history of this country. pic.twitter.com/P4ARCyMZJG

But he never seemed quite sure how to handle the potential historic milestone of becoming the first Jewish presidential nominee for a major American political party — whether to emphasize it or to downplay it in the hope that this politician who famously hates talking about himself and seems to want to talk only about the “billionaire class” might avoid speaking publicly about his personal identity at all.

That’s how we ended up with the strange sight of the most successful Jewish presidential candidate in US history responding to a neo-Nazi targeting him with an actual swastika flag by releasing a statement that seemed to foreground his outrage as an American more than his outrage as a Jew.

But Sanders is not unique. This is a conflict Jews who wanted to participate in the political life of majority non-Jewish societies have been navigating for centuries.

When France became the first European nation to legally emancipate its Jewish community, this emancipation was granted on the condition that Jews give up their political identities as members of the Jewish community and become French citizens only; as one French revolutionary politician famously declared, “The Jews should be denied everything as a nation, but granted everything as individuals.”

The terms of the bargain were clear: French Jews could participate in French politics, but they could do it only as French people and not as Jews, leaving their Jewish identities in the privacy of their own homes. A Jew who wanted to participate in public political life could not talk about how their Jewishness influenced their politics.

American Jews, too, have been navigating this conflict for decades, and Sanders, born just before the U.S. entered World War II, was raised at a key moment of transition for American Jewish politics. Bernie’s father, who fled rising anti-Semitism in Poland in 1921, would have emigrated to a New York City full of Jewish socialists who framed their politics in culturally Jewish terms, who saw their politics as expressions of Yiddishkeit culture and not as ways of escaping it. Many wanted to be Jewish socialists, not socialists who happened to be privately Jewish.

But by the postwar years, the combination of rising material living standards among American Jews, migration to the suburbs, and fear of anti-Semitism linked to McCarthyism and the anti-Communist Red Scare led to American Jewish organizations reorienting their politics in an attempt “to be identical to the white middle class… to be like the majority.”

Jewish organizations tried to portray their politics as fully American, no different than those of any other American citizen. The fear was that expressing political beliefs in specifically Jewish terms would make Jews stand out and attract anti-Semitism, so Jews tried to blend in as much as possible.

Bernie Sanders, born on the cusp of this generational shift from the pre-World War II Yiddishkeit socialists of Brooklyn and the Lower East Side to the postwar trend of expressing Jewish politics in fully American terms, has never seemed quite sure how to negotiate this shift, which perhaps explains why at times he has emphasized how his Jewishness influences his politics, and at other times he has wanted to downplay his Jewishness entirely and just talk about being American — a conflict played out even in his conflicted response to the Nazi flag at his rally last week.

Maybe that’s part of why Bernie could not win this race: He could never quite figure out what it meant to run for president as a Jew in 2020.

Bernie came closer to the mountaintop than any other Jew before him, but he did not scale it; we seem likely to see another election campaign fought between two white Christians this fall.

We may or may not see a Jewish president in my lifetime, but if we do, it will assuredly be someone from a younger generation, farther removed from the Holocaust and the debates about assimilation that consumed Bernie’s generation of American Jews.

And if Bernie himself never seemed to resolve the question of whether he should be a Jewish politician or just an American politician who happens to be Jewish, well, a whole new generation is ready to take that question up on our own — just as Jews have for centuries before us.

Joel Swanson is a contributing columnist for the Forward.