‘We rehearse for this all the time’: Holocaust survivors face coronavirus with grit and humor 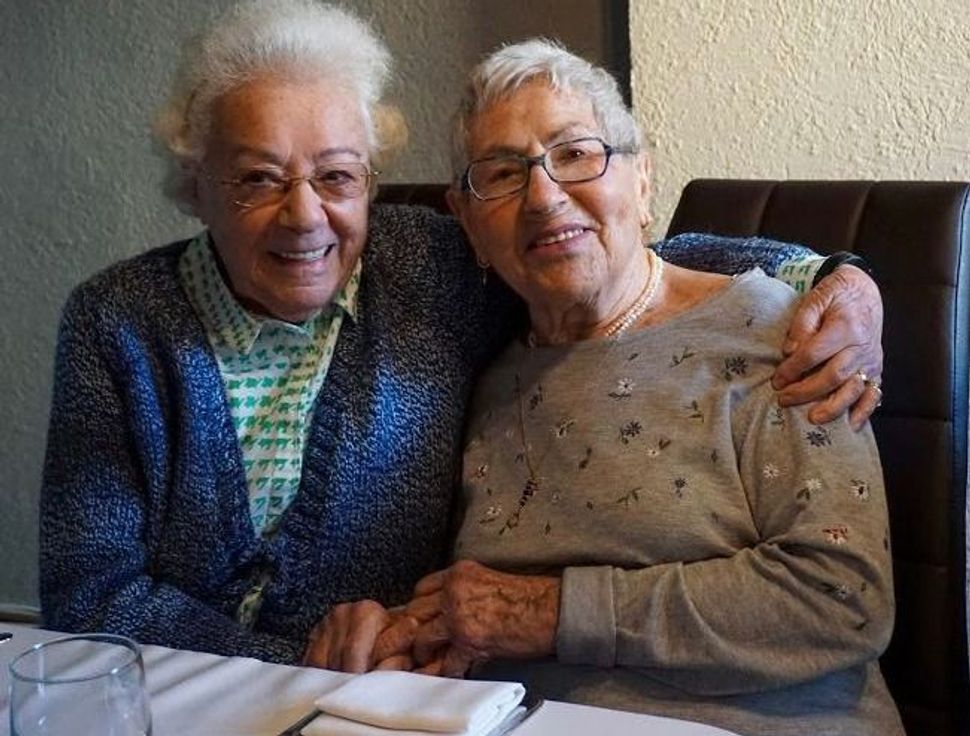 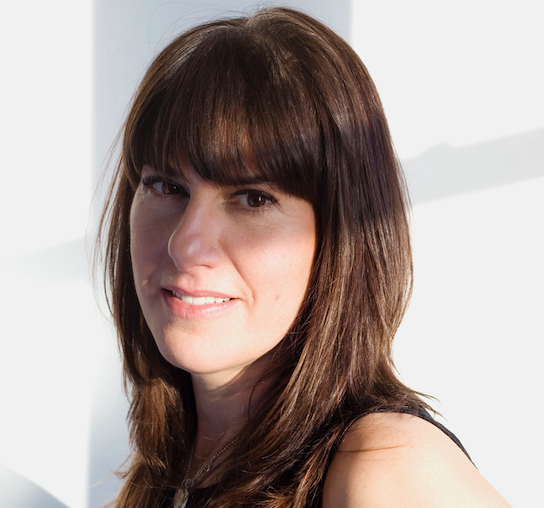 For Cordula Hahn, a Holocaust survivor in Brooklyn, the first trigger was the lack of toilet paper.

“Oh, no, will I have to go back using newspaper?” she asks, half chuckling. “That’s what we did when we were in hiding in the Netherlands, and seeing the panic over toilet paper immediately brought back that memory.” 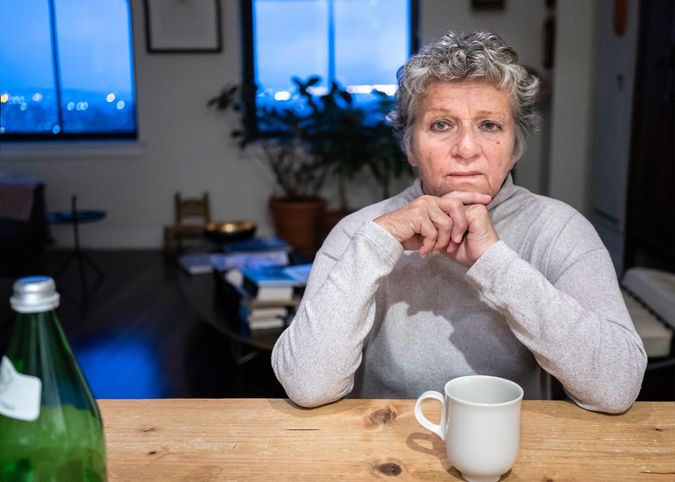 But rather than a source of trauma, childhood recollections of enduring great adversity are helping Holocaust survivors like Hahn better brace for our current global pandemic. As Boomers, Gen Xers and Millennials race to hoard water, food and yes, toilet paper, survivors are meeting the challenge of life in the time of coronavirus with signature tenacity and humor.

“I grew up poor and as a refugee after the war, so I know I can live without stuff, which is very comforting actually,” says Hahn. “I don’t need stuff to survive — including toilet paper.”

Some survivors report feeling a sense of command, invincibility and even a rush of adrenaline during moments of crises. Others react more cautiously; for them, the sight of empty store shelves isn’t such a comfort.

“It takes me right back to September 1st, 1939,” says Natalie Scharf, a survivor living in Philadelphia. “My parents had a grocery store where we lived in Jaworzno, Poland, right by the German border. They knew the Nazis were seizing all Jewish businesses, so they quietly began to bring sacks of flour, sugar, beans, barley, onions and potatoes home to live off after they raided our storehouses. I’m not comparing this to the Holocaust, but seeing everything shut down, hearing of closed borders, food shortages, no travel, being afraid to go outdoors, see family and even touch anything, it feels like the start of the war. But now you don’t see the enemy.” 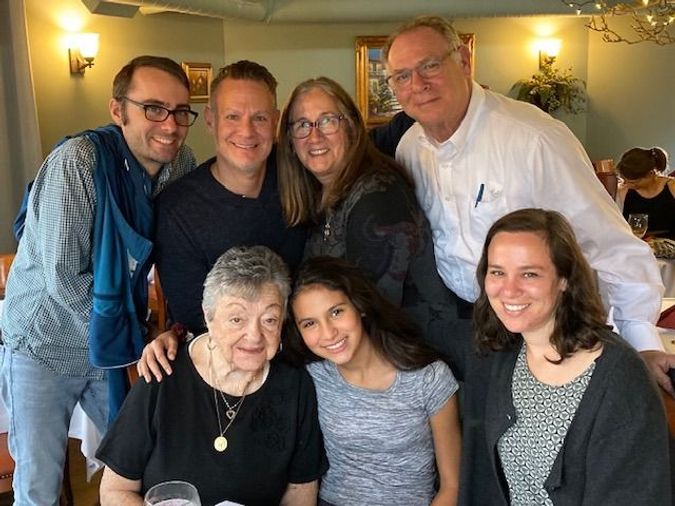 Natalie Scharf with her family at her 94th birthday

Still, that fear of the unseen and the unknown, which can be crippling to most, hasn’t left Scharf feeling powerless or doomsday-like. She, like many survivors, is tough, courageous and resilient, able to navigate emergencies calmly and with her wits intact. The survivor instinct is a source of hope for many at this time, helping fuel their families and those with whom they interact during this pandemic.

The prevailing attitude seems to be “We’ve seen worse,” says Greg Schneider, executive vice president of the Claims Conference, which provides 50,000 survivors with pensions, in addition to a whole range of welfare services through its funding of 300 agencies around the world. “I was checking in with a survivor friend and reminding him to stay in. He said: ‘God saved me once, he’ll save me again, but maybe I can give him a little help this time’.”

Schneider says that the defiance and grit of survivors is inspiring to him and his staff as they rise to meet the challenge of ensuring their safety and wellbeing; survivors are among the most vulnerable to the coronavirus.

“The most devastating part of this is that the specific structures we’ve built over years to provide dignity to survivors are now the ones that are the most dangerous,” he says. “We have a very robust network for homecare attendants that cater to 75,000 survivors around the world, which enables them to live in their homes independently. But now those two to three aids who come in to clean, shop, provide company, medical care, etc, are introducing risk factors to that survivor. So every day, the agencies that provide that care have to reevaluate.”

For instance, if a home aide reports sick, agencies have to weigh the plusses and minuses of foregoing a service versus introducing a new person into their home. “If the attendant is washing the floor, let the floor remain unwashed for a week,” says Schneider.

The uncertainty of the present, whether not being able to rely on a trusted home healthcare worker, hug a grandchild or gather for a regular kaffeeklatsch is unsettling, even for the most unflappable survivor.

“The insecurity of life is a trigger for me,” says New Jersey resident Rachelle Goldstein, co-director of the Hidden Child Foundation at the Anti-Defamation League. “Because of our pasts, we know that every good thing in life is ephemeral. They can be gone in an instant, because this is what happened to us. We were living with our parents, and everything was fine one moment, and then all of a sudden everything was gone in an instant.” 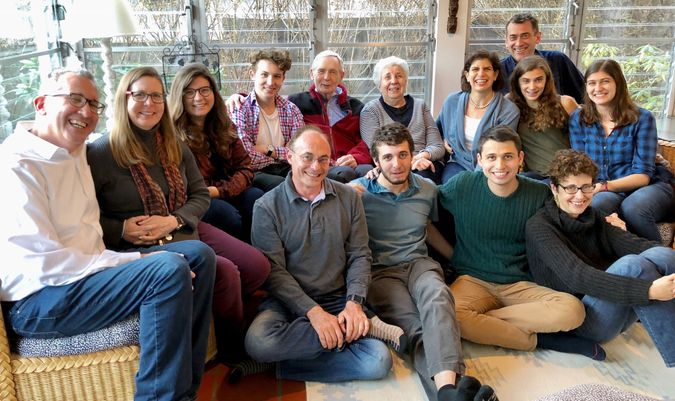 Rachelle and Jack Goldstein with family

Goldstein says her childhood helps her get into coping mode, which is a source of pride for her and her husband Jack, who was also a hidden child. “In a way, we mentally rehearse for times like this all the time,” she says. “We always think, what do we do if…”

This foresight, fight or flight instinct and ability to mobilize, helped Goldstein and her family survive coups in Brazil and Nigeria, where they were living with their three children during Jack’s tenure as an engineer working abroad.

That prescience led her to cancel a Hidden Child Foundation meeting on March 11th. Reading news of the pandemic’s spread, she began to question the wisdom of sticking to their schedule. Others in her group from the Tri-State area also began to feel anxious about traveling into the city and gathering. They each asked their doctors, who advised them to postpone the affair.

“At first I thought, are we overreacting?” Goldstein recalls. “Once our doctors said, ‘Absolutely not,’ I felt validated, that I wasn’t crazy.”

She also began to self-quarantine and advised Jack to do the same, though she says he was more cavalier about going to work. It took a government shutdown to keep him at home.

“Interestingly, Holocaust survivors aren’t very anxious right now,” says Eva Fogelman, PhD, a New York-based clinical psychologist who specializes in Holocaust survivor and second and third generation post-trauma. “There’s a sense that this is nothing compared to what they went through.”

But that doesn’t necessarily make the present reality easy for them. For survivors like Lola Israel, who lives independently in Haifa, moving in with her daughter’s family turned stressful.

“Not having her things around, not being in her own element made her feel uprooted and that made her anxious,” says daughter Zahava Seidner. “Then my daughter, who works in Ichilov Hospital in Tel Aviv, decided to come home, and we couldn’t risk having her exposed. So I decided to stay with my mother during this time.”

While Israel isn’t on complete lockdown, the elderly have been ordered to remain inside, which is a hard proposition for an active 92-year-old like Lola.

“I’m not supposed to leave the house, but I needed some air, so we took a walk around the block,” she says. “I can endure anything.”

For Sonia Abiri, a survivor from Katowice who resides in an assisted living facility near Tel Aviv, life goes on even with characteristic irreverence. She may be relegated to eating meals solo in her apartment and only having virtual visits with her family, but there is one real-time ritual she won’t forego: her daily bridge game with three of her neighbors. 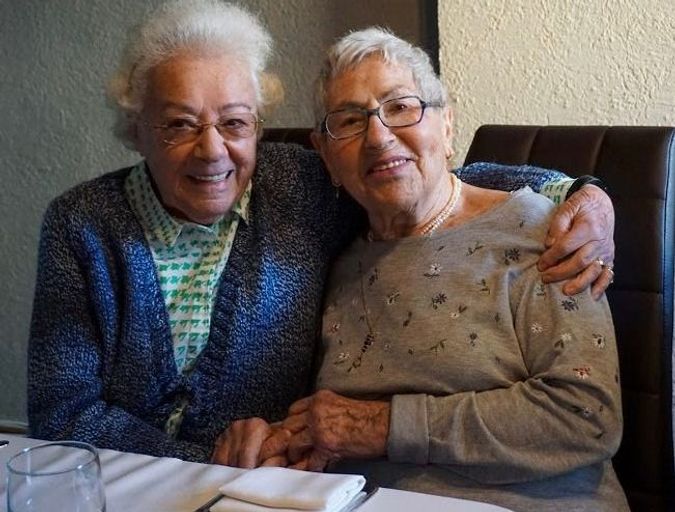 “She says she’s had her share of life on this planet and wants everyone else to have it as well,” says her son Roni. As for the card game, he says they sit a meter apart, they don’t play for money and if it helps keep her spirits up, that works for him.

For survivors, who lost so much in life, family carries extra weight. The prospect of Seders without loved ones at the table hangs heavy, as do the cancelled Yom Hashoah commemorations, which are a yearly opportunity for survivors to gather with their own, remember loved ones and grieve with those who truly comprehend their inexplicable experiences.

“April is very emotional time for survivors, starting with Passover and then you go right into Yom Hashoah,” says the Claims Conference’s Schneider. “If you live in Israel, there’s also Independence Day, Memorial Day, all within a two-week period. So you go from incredible highs to lows, and it’s very emotional under normal times.”

Though the agencies with which the Claims Conference works are busy just meeting the physical, day-to-day needs and don’t have the bandwidth to take on much more right now, Schneider says they will figure out ways to offset the isolation survivors are bound to feel during the upcoming holidays and help them maintain a sense of faith and community. More than anything, he says, survivors inspire his staff with their courage and steadfastness.

“My mother in law is a Holocaust survivor and is going through chemo, so she’s immune suppressed and elderly, but she’s amazingly strong, physically and emotionally,” he says. “She’s going stir crazy for sure. She wants to get out, but the face time with her grandkids is her chicken soup, it’s the best medicine. And she gives us hope, because this is traumatic for all of us.”

A mix of humor, music and art are other good soul salves. Hahn recommends Chilean musician Violeta Parra, whose song “Gracias A La Via” [Thank you, Life] helped her get through the death of her sister a few years ago. Without missing a beat, she adds, “She [Parra] killed herself, by the way.”

For comic relief that’s lighter on the dark irony, singer and YouTube sensation Randy Rainbow’s “The Coronavirus Lament” seems to be hitting all the right notes.

“We circulate a lot of jokes, too, many about toilet paper,” says Goldstein. “The important thing is to stay connected, despite social distancing.”

Marisa Fox-Bevilacqua is a New York-based journalist who is writing and directing her first documentary, “My Underground Mother,” about her search for her mother’s hidden Holocaust past. Follow her on Twitter, @undergroundmom.

‘We rehearse for this all the time’: Holocaust survivors face coronavirus with grit and humor