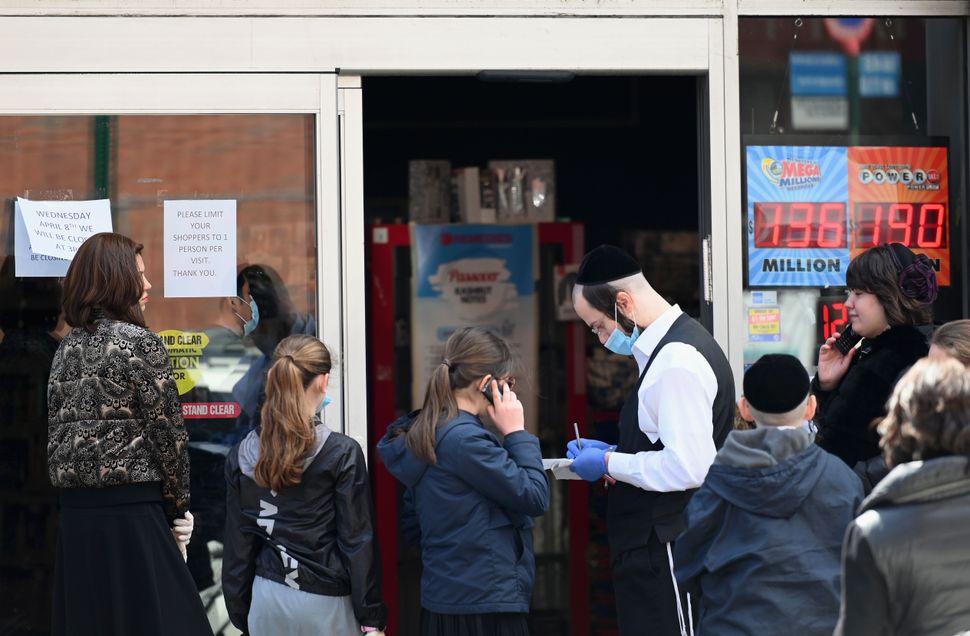 Members of the Orthodox Jewish community stand in line at a pharmacy on April 8, 2020 in Brooklyn, New York, as the Passover holiday starts this evening and runs to April 16, 2020. - Churches will be empty this Easter and Passover festivities will also take place behind closed doors owing to the COVID-19 lockdown. Christians will be obliged to turn to services broadcast on television or over social media this year owing to the coronavirus and Jews will mark the Passover holiday in their own homes rather than as communities. (Photo by Angela Weiss / AFP) (Photo by ANGELA WEISS/AFP via Getty Images) Image by Getty Images

On Tuesday night, there was a funeral for a Hasidic leader in Williamsburg, Brooklyn. Unfortunately, throngs of people attended this funeral. They didn’t adhere to social distancing guidelines, although most in the crowd did wear facemasks.

The gathering drew widespread criticism, including from many in our community, and deservedly so. Nobody is exempt from these guidelines. A funeral is not a reason to put other people’s lives at risk, even the funeral of a spiritual leader.

The condemnation of the crowds was warranted. What wasn’t warranted was Mayor Bill de Blasio’s response which, in addition to specifically calling out the funeral, generalized to include the entire “Jewish community” — an especially heinous remark given later revelations that City Hall had initially granted the community permission to hold the funeral, even coordinated with them.

1. The Chasidic synagogue wanted to honor their saintly rabbi so they came up with a misguided scheme for an outdoor ‘socially distant’ public funeral. They were so convinced they could pull this off they COORDINATED with NYPD and even handed out masks.

The mayor’s tweet was egregious and outright anti-Semitic. “My message to the Jewish community, and all communities, is this simple: the time for warnings has passed,” he wrote. “I have instructed the NYPD to proceed immediately to summons or even arrest those who gather in large groups. This is about stopping this disease and saving lives. Period.”

How is it ok to blame the entire Jewish community for the actions of a minority? Even targeting all Orthodox Jews with a tweet would have been shamefully bigoted. Moreover, the people the Mayor’s tweets were addressing are not even on Twitter. Most Satmar Hassidim don’t spend their time whiling away the hours scrolling social media, which is by and large frowned upon in haredi circles. Those who are tempted to attend funerals will have no idea what was said about them.

It is the general public who will see his remarks — and get the idea that the Jews are the problem.

What boggles the mind is the mayor’s cold-heartedness. How can he paint a target on the backs of members of a community that just last year experienced daily anti-Semitic attacks? A community which suffered both a recent stabbing and mass shootings? Mayor de Blasio oversaw a modern-day pogrom and is stoking that same fire.

Amazingly, tweeting about the funeral was not sufficient. De Blasio decided that chasing away Orthodox Jews would play better for his supporters, and actually went to Williamsburg to oversee the breaking up of a funeral that he himself had previously authorized.

We have lost so many these last two months + I understand the instinct to gather to mourn. But large gatherings will only lead to more deaths + more families in mourning. We will not allow this. I have instructed the NYPD to have one standard for this whole city: zero tolerance.

Many Jewish leaders have condemned his tweets. Unfortunately, aside from Ted Cruz, our politicians and have been silent so far.

Would DeBlasio have sent this identical tweet with the word “Jewish” replaced by any other religious minority? If not, why not? Laws should be enforced neutrally w/o targeting religious faith. #ProtectFreeExercise https://t.co/dMVcX0bin4

If the mayor tweeted this about any other ethnic community, the outrage would have been immense — and deservedly so.

Our community is far from perfect, but neither is any other. We can handle criticism and welcome feedback. All we ask is to be treated with respect and dignity. Just because we dress differently and have different customs doesn’t mean that we are less deserving of fair treatment.