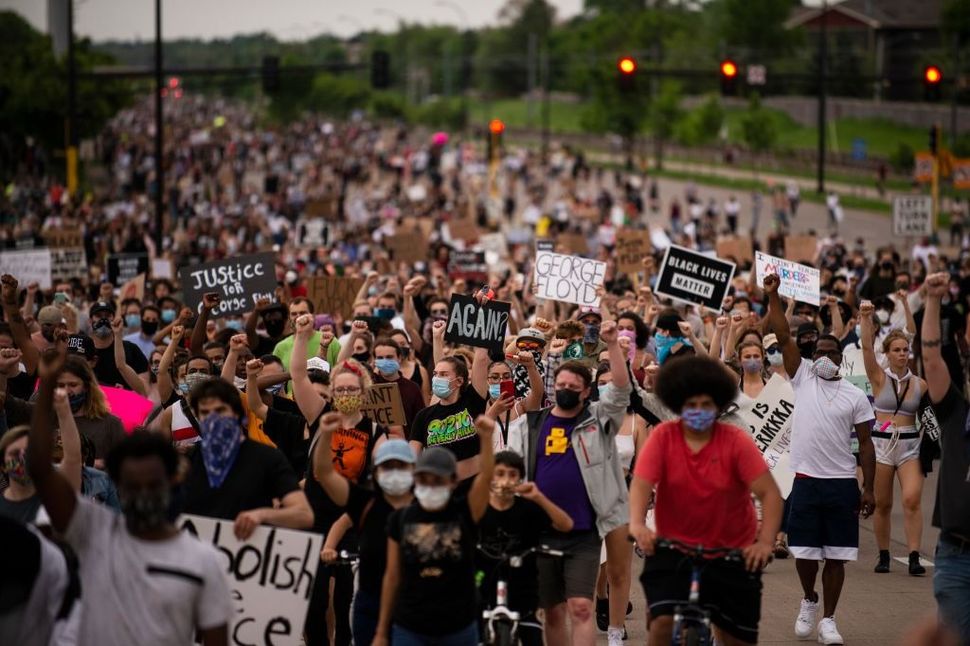 More states deploying National Guard troops to quell protests than at any time since the 1968 assassination of the Rev. Martin Luther King Jr. Unemployment rates not seen since the Great Depression. A pandemic more powerful than any since the 1918 flu.

We are living in historic times indeed. In all the worst ways.

We have just finished the holiday of Shavuot, when we celebrate our ancestors’ receipt of the Torah at Mount Sinai. In this, as in the retelling of the Exodus story on Passover seven weeks before, we are commanded to imagine that we ourselves were at Sinai, that we ourselves were brought forth from slavery in Egypt.

And now we must imagine that we ourselves were George Floyd, Ahmaud Arbery, or Breonna Taylor. The horrors of their deaths are literally unimaginable, particularly from our perches of privilege. But this extreme empathy is an essential part of our tradition, indeed of our humanity.

Imagine that we ourselves experience the police as threats to our lives, our livelihoods, our freedoms rather than protectors of them. That we ourselves might have so much rage toward the fundamental unfairness of today’s America that we would risk our very lives — breaking social distancing despite knowing that it could lead to another wave of this virus killing our neighbors — to show it. That we might even loot stores and set the streets aflame for lack of any belief that nonviolent protest could actually change anything.

One of the most pernicious aspects of this pandemic is the way it has allowed us to retreat into our circles of sameness. So many of the structures that helped us see other people’s experiences have been slowed or stopped.

The subway. The service sector. The office complex. The public school. The synagogue building that, as Dahlia Lithwick put it in a profound essay published in these pages last week, “forced you to rub along beside people who voted differently, thought differently, observed differently.”

After years of decrying the dangers of filter-bubbles in social media, we now find the same phenomenon filtering our professional, avocational, religious, entertainment and even civic circles, because all of those things now unfold in the same mediated spaces. Interacting with people who live so differently — with the homeless, with the mentally ill, with undocumented immigrants, with the working poor and, yes, with people whose skin color is not the same as ours — is now something we only do if we really try.

That’s what this new moment calls for: Creating space for yourself to see through someone else’s eyes. The same technology that allows you to surf Shavuot study sessions across the globe also allows you to sit in on services at a Baptist church. You could subscribe to The Root, a leading African-American website and email newsletter, or check for news on a radio or television station from the political position you don’t identify with. You could drive to a very different neighborhood for your socially-distant walk.

There has been a big kerfuffle of late over how best to estimate the number of Jews of color in the United States. Two demographers published an essay showing that prior research suggesting it was 12% to 15% of the nation’s 5 million-plus Jews was likely significantly off, and that it was more likely closer to the 6% estimate of a different study. Outrage erupted among both Black Jewish leaders and liberal white allies: more than 2,500 people and 200 organizations signed onto a letter titled #JOCsCount.

The fight over how many is misframed. As April N. Baskin, one of our strongest inclusion-advocates, put it in a news release about the letter, “Jews of Color count — not because of our numbers, but simply because of our divinity and humanity.”

Which is why, especially now, we must recommit to make our Jewish institutions reflect our communities’ diversity, to better advocate for people of color, to help them push all of us to imagine as if we ourselves had been at Sinai — or had been under the knee of former Minneapolis Officer Derek Chauvin, unable to breathe.

We are living in historic times, epochal times. Some have likened the changes ahead for Jewish practice and engagement to the changes after the destruction of the holy Temple. Our ancestors somehow managed to absorb that radical disruption and ensure Jewish continuity for another 2,000 years.

Our ability to exercise extreme empathy — toward everyone in our own communities and beyond — will help determine what kind of Judaism we leave for other generations to imagine.