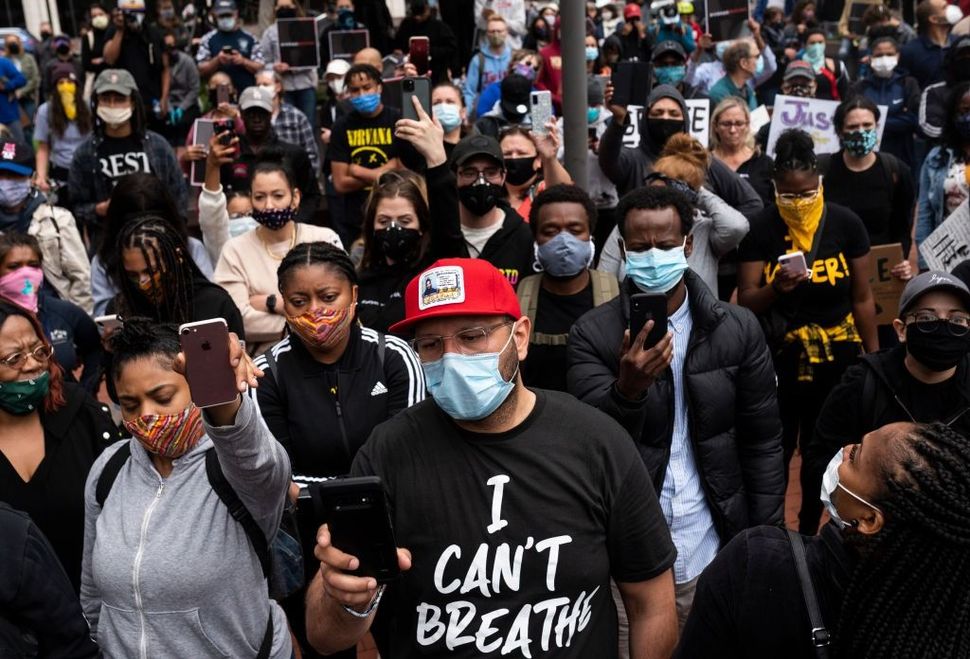 I am sure you are as outraged as I am over the murder of George Floyd during a violent arrest by police in Minneapolis. This brutality took place on the heels of the murder of Ahmaud Arbery, who was chased and gunned down by armed white men while on a jog in Georgia, and the fatal shooting of Breonna Taylor, after police stormed her home and shot her while she was asleep in her bed.

These deaths did not take place in a vacuum. They bring into full view deeply entrenched systemic racism. What’s more, they took place amid staggering racial disparities during the COVID-19 pandemic and in our prison system. It is no wonder that the grief-stricken black community is raging in anger and pain.

This is a pivotal moment in our history. As we reboot the Jewish community in the post pandemic world, we must ask ourselves what kind of world we hope to live in and what can we do to safeguard a society that works for justice for all people. We cannot ignore what we witnessed in these videos and go on with business as usual.

The American Jewish community has a distinguished history of addressing the injustices in our nation. We are proud of our role during the Civil Rights era and our legacy of social action. However, resources for Jewish advocacy on civil rights issues have diminished over the past two decades. I hope that these recent incidents will serve as a call to action.

How can we use our influence and support to further the cause of justice? To answer this question, we must first reckon with the plight of the black community in America and the scale of the injustice and the grim statistics. Black Americans are three times more likely to be killed by police than White Americans. Over the past few years, more than 12 cases have received national attention. The criminal justice system and the “war on drugs” has disproportionately harmed black communities and has brought four decades of mass incarceration upon the nation. Black Americans make up only 13% of the U.S. population, yet they make up 33% of the nation’s prison population and are imprisoned five times the rate as white Americans.

In 2018, more black Americans were uninsured compared to white Americans, 9.7% compared to 5.4% among whites and reported higher rates of discrimination, when seeking medical care. Those same inequities and pre-existing conditions are also part of the reason the black community is disproportionately harmed by COVID-19. In 2016, the median wealth of white American households was $171,000, which is 10 times more than black American household’s wealth of $17,100.

Here are some ideas for what the Jewish community can do to reduce racial inequality and systematic injustice:

We can speak out against racism and killings of black citizens by police and others. The Jewish community has an important role to play with law enforcement, as we have built relationships with them in securing our own community. We can heal the divide between law enforcement and the black community. At the same time, we can hold law enforcement accountable for the necessary cultural and systemic change.

We can recommit to building a just society by ending racism and racist policies and supporting equal opportunity for all people regardless of their race, religion or color of their skin. We must recognize that these disparities exist along racial lines and not pretend to be colorblind.

We must build and strengthen trusted relationships. Jewish and black communities need to have a deeper understanding of each other’s histories, traumas, and hopes for the future. While the Jewish community is impacted by growing anti-Semitism, the black community is harmed by bigotry and racism. Our shared history in fighting in the Civil Rights era can inspire a new generation of joint activism against it. While this was more than 60 years ago, it can energize us and provide a blueprint on how we can collaborate on today’s challenges.

We must also advocate on issues of priority to the black community. We can play an important role in finding a solution to mass incarceration and several disparities in or criminal justice system. Philanthropies should invest in Jewish advocacy and anti-discrimination work.

We must nurture relationships with emerging leaders of both communities and prioritize the voices of Black Jewish leaders. We must acknowledge that there are Jewish people of all races and make sure that Jews of Color feel fully supported within the Jewish community. Black Jews may feel less welcome in spaces with increased police presence.

Finally, we must educate the Jewish Community about the challenges faced by the black community, so we become motivated to act.

While the Jewish community contemplates our next steps of rebuilding what was lost in the pandemic, there is a tremendous opportunity to play a role in creating a better society for everyone.

Melanie Roth Gorelick is the senior Vice President of the Jewish Council for Public Affairs.