Jews came to America to escape darkness. For African Americans, America was darkness. 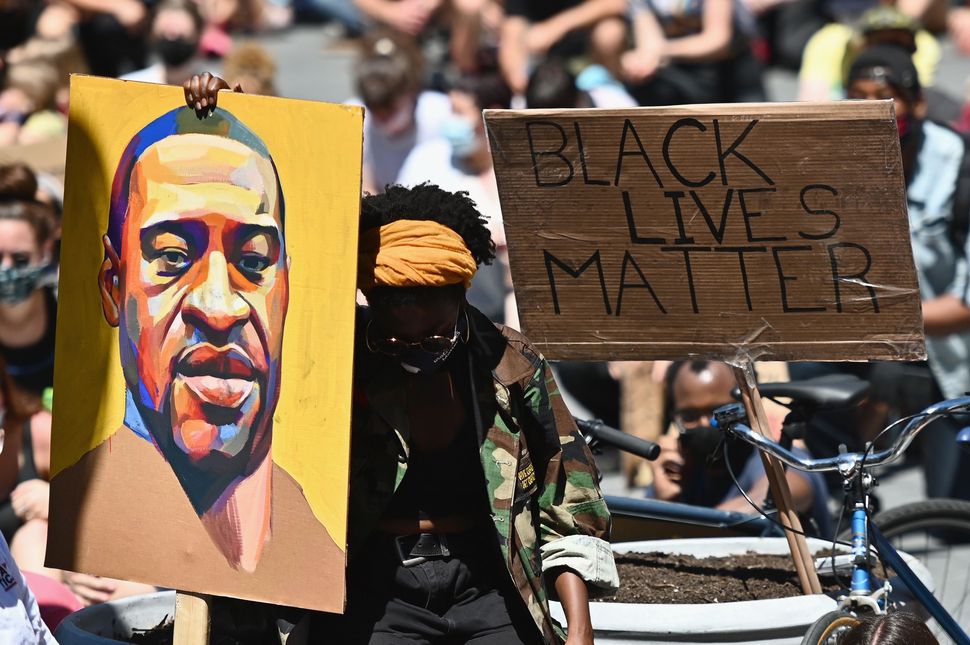 TOPSHOT – Protesters hold up signs during a “Black Lives Matter” protest in front of Borough Hall on June 8, 2020 in New York City. – On May 25, 2020, Floyd, a 46-year-old black man suspected of passing a counterfeit $20 bill, died in Minneapolis after Derek Chauvin, a white police officer, pressed his knee to Floyd’s neck for almost nine minutes. (Photo by Angela Weiss / AFP) (Photo by ANGELA WEISS/AFP via Getty Images) Image by Getty Images

This weekend, I marched across the Brooklyn Bridge. To the left, through the thick cables and ropes of the bridge, I could see the Statue of Liberty, clear and strong. My grandmother had learned the Emma Lazarus poem by heart when she was a child, so I memorized it, too, and now the words came back to me as we crossed into Manhattan: Here at our sea-washed, sunset shores shall stand/ A mighty woman with a torch /whose flame is the imprisoned lightening /and her name Mother of Exiles.

It’s hard for me to see the Statue of Liberty and not think about the hope with which my ancestors came to America. One great-grandfather, alone at thirteen, was sent by his family to seek a better life. Another great-grandfather, the rabbi of a small Belarusian village, was fleeing the pogroms with my grandfather, then sixteen. All of them saw this statue, this vision against the water, emblazoned with the words of a Jewish poet welcoming the exiles to their new home.

Who could imagine such hope?

This is not to say that as Jews, our time in this country has always been rosy. Decades after his arrival, my great-grandfather’s synagogue was torched by arsonists the first night of Passover. Everyone remembers the story, especially the crazed guest rushed back to save the Torah scrolls. But nobody thought to tell me the story until I was well into my college years.

There have been the restricted clubs, the school quotas, the countless episodes of bullying and beatings. There was the lynching of Leo Frank and the shooting in Pittsburgh. And yet, Jews continued to come to America to flee the darkest episodes. After my great-grandparents would come the survivors of the Holocaust, the Jews escaping Egypt and Iran, my cousins fleeing the Soviet Union on hunger strikes. For all of them, America was the place we went to willingly, often desperately, to both survive and seek a life better than survival. America was the light at the end of so many dark tunnels.

For the ancestors of so many Black Americans, America was the tunnel. The darkest period. The place that brought death and the opposite of hope.

Abandon all hope, ye who enter here, is what Dante imagined inscribed on the gates of Hell, and it was these words I thought of next when marching across the Brooklyn Bridge and looking at the Statue of Liberty, thinking about how many other people have been brought to these sea-washed, sunset shores.

Of course, as American Jews, we know about this distinction between our fate and the fate of African Americans. But there is, sometimes, an impulse to see shared cause with racism in this country because we ourselves have been so intimate with tragedy. We know what it is like to be oppressed and killed and wantonly harassed, we think, and we know overcoming it.

Sometimes this impulse is spoken in a message of solidarity: Never Again. Sometimes it is whispered, the comparison prompting a question that is often asked softy, lest the racism be heard too loudly: We came to America, on the heels of so much trauma, and here we flourished. Why does the Jewish story and the Black story in America look so differently?

The truth is simple: We live in a different America, one that offered us a haven. We fled to America and away from the lands of our greatest horrors, while the Black community was forced to overcome their greatest horrors among the people who wrought them.

In the past few days, I have been thinking about what it means that the American Jewish community has processed the tragedy of the Holocaust, that defining tragedy, in a country that also sees the Nazis as evil. In a country where our pain and the horror of our experiences did not condemn the majority of the population but served as further confirmation of their heroic valor, their moral worth and bravery.

What if the Jews had stayed in Germany?

As 20,000 of us marched across the bridge chanting Black Lives Matter, I thought about what it would have meant if the Jews had to process the Holocaust not with Americans but with Germans, with the very people who had organized our murder, and then with their children and relatives and friends. How would we have been forced to hedge our trauma, to delicately navigate the Germans’ feelings, to help them process their own pain and anger at the legacy of what was done? How would we have found the right words to calmly explain why we aren’t yet over such ancient history?

The Jewish experience in America and the Jewish experience of hate and persecution are two different chapters in our history; for Black Americans, they are the same. When we fail to understand that distinction, we risk subsuming the story of Black oppression into our own narrative, and seeing ourselves as aligned with the persecuted in this story. Worse, we fail to understand why and how Black discourse, in the country of their oppression, is so different than the discourse of Jews, in this country of our security.

Shira Telushkin lives in Brooklyn, where she writes on religion, fashion, and culture for a variety of publications. She is currently finishing a book on monastic intrigue in modern America.

Jews came to America to escape darkness. For African Americans, America was darkness.