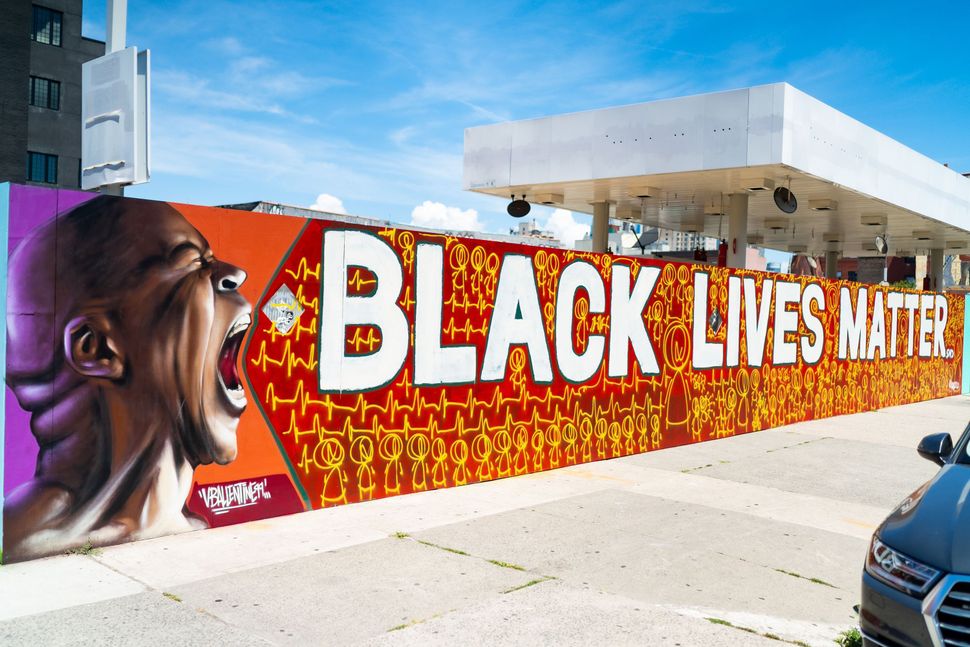 JUNE 21: Street art reading “Black Lives Matter” is on display on a wall on June 21, 2020 in the Brooklyn Borough of New York City. (Photo by Gotham/Getty Images) Image by Getty Images

In a recent OpEd, Abe Silberstein argued that “It’s not Black Lives Matter’s job to make you feel comfortable about Israel.” What exactly does that mean? Consider the possibility that we are not centering our concerns, but rather that we recognize when others seek to justify their dismissal of our concerns. If it is necessary to “demand inclusion” for Zionism and pro-Israel activists in racial justice movements, perhaps feeling uncomfortable with Black Lives Matter is realistic.

One can protest for racial justice and support police reform without owing Black Lives Matter any support.

Senator Tim Scott (a Black American) recently said, “If it causes offense that I say that ‘all lives matter’ — black lives, white lives, police officers, jurists, all of us, even politicians, all of our lives matter — if that is somehow offensive to someone, that’s their issue, not mine.” Senator Scott added, “If we’re saying that the country has a provocative history on race, I affirm that fact,” and yet, he went on, “we are better together.”

Racial polarization, destruction and looting, and vandalization of synagogues will not bring us together. Neither will Black Lives Matter.

But maybe people like Senator Scott can bring us together. A good place to start might be with a firm commitment to two ideas: all lives matter and people shouldn’t find it necessary to “demand inclusion” if they feel their support for Zionism and Israel is also part of support for racial justice.

As an American Jew, I’m insulted by Abe Silberstein writing it’s inappropriate to center on “Jewish concerns at a time that is just not about us.”

As an Israeli Jew, I’m insulted that the manifesto of the Movement for Black Lives falsely accused Israel of “genocide” and libels it with the term “apartheid.”

If I am not for myself, who will be for me? So wrote Hillel. Yet as anti-Semitism rises around the world, many Jews ignore the encroachment because those signs generate fear and discomfort. That is understandable.

But to deny that it exists is not only foolish; it is damaging because it disengages Jews from protecting themselves in a world gone a-hate.

It is my sincere hope that those who deny it in our midst — and they are there — will awaken to the danger and share their concern with others so that we together may protect our people.