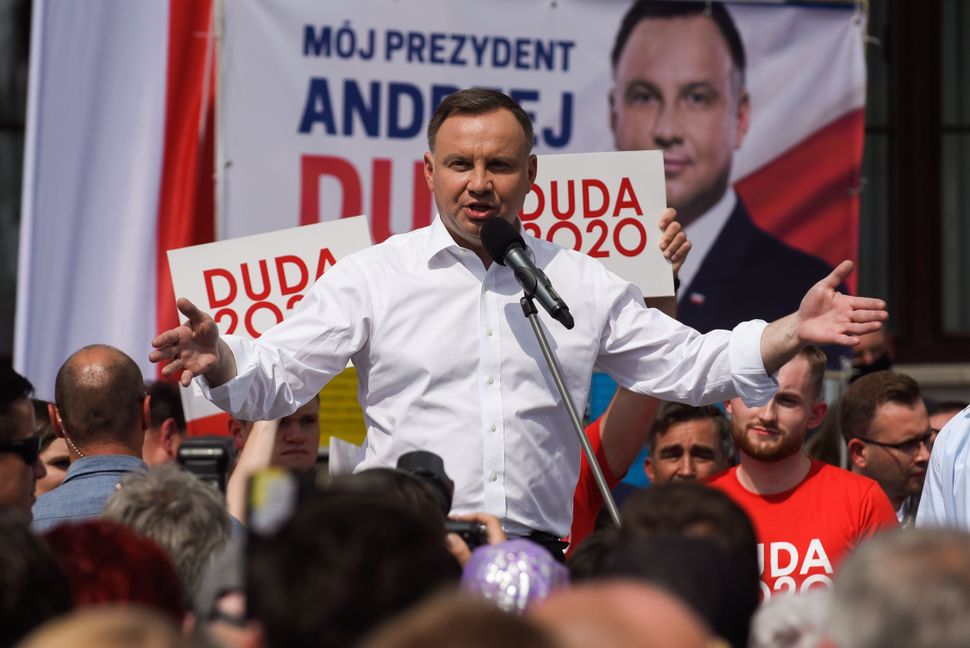 SEROCK, POLAND – JUNE 17: Andrzej Duda, the rulling President of Poland backed by the governing right-wing Law and Justice (PiS) party delivers a speech for locals and supporters during a presidential campaign ahead of the rescheduled Presidential Elections on June 17, 2020 in Serock, Poland. Polish citizens will go to the polls on June 28, 2020 after the presidential elections were rescheduled due to the coronavirus crisis. The latest opinion polls show a decline of support for the ruling president, Andrzej Duda. (Photo by Omar Marques/Getty Images) Image by Getty Images

On Sunday, Poland will hold its presidential election, after postponing the original election date in May due to coronavirus lockdowns. The incumbent president, Andrzej Duda of the right-wing Law and Justice Party, is running for reelection to a second term, and while President Duda enjoyed a comfortable lead for most of the campaign, recent polls have shown his support slipping, and he is now running neck and neck with the leading opposition candidate, Warsaw Mayor Rafał Trzaskowski of the centrist Civic Platform.

In a country with only 30,000 remaining Jews, who now comprise a minuscule 0.08% of the total population (in comparison to fully 10% of the population in the years before World War II, the largest Jewish community in Europe at the time), Jewish issues have played a remarkably significant role in the campaign. The reasons why bear lessons that reverberate far beyond the borders of Poland. A state-run Polish television network closely linked to President Duda recently claimed that his opponent wants to provide compensation to Jewish Holocaust survivors and their descendants for property stolen during the war. “Experts are certain,” the TV presenter warned. “The stream of money that is flowing from the state budget into the pockets of Polish families will dry up if Trzaskowski, after a potential victory in the presidential election, seeks to satisfy Jewish claims.”

Currently, Poland is the only nation in the former Soviet bloc that has taken no action to return or provide financial compensation for private property stolen from its Jews during the Nazi occupation.

This attack on the Polish political opposition for daring to acknowledge that, just maybe, Poland owes restitution to its Jewish community — a community which lost 90% of its members in the Holocaust — is grossly slanderous and anti-Semitic. It also isn’t anything new for President Duda.

Duda signed a notorious bill making it illegal to accuse Poland of bearing any responsibility for wartime atrocities against the Jews, or to refer to Nazi concentration camps on Polish soil, such as Auschwitz itself, as “Polish death camps.” Jewish groups say the law has led to increased anti-Semitism and made Poland’s small remaining Jewish community feel less safe.

President Duda’s refusal to acknowledge any Polish complicity in the extermination of Poland’s Jews reflects a distinction historian Deborah Lipstadt draws between “hard” and “soft” Holocaust denial. If “hard” denial means openly denying the existence of the gas chambers and death camps, “soft” denial is something harder to identify and, in many ways, more pernicious.

It means blaming the Germans for the murder of every single Jew who died during the war, allowing all other nations to evade responsibility. It means claiming all Poles suffered equally during the German occupation, thereby erasing the specificity of Jewish suffering.

That’s why President Duda can state that the question of wartime restitution is not about Jews at all, but “concerns all those who lost property, irrespective of their nationality.” This, despite the fact that Polish historian Jan Grabowski has recently proven that Polish collaboration with the Nazis in rounding up the Jews was far more extensive than previously known. The German occupiers were unable to distinguish between Polish Jews and non-Jews on their own, and so turned to Polish police officers to identify the Jews in their midst. Grabowski concludes that “without the Polish police, the Germans would not have succeeded in their plan.”

That’s the history President Duda does not want Poles to accept, because then they might have to accept responsibility for making restitution today. Far easier to portray the Poles as passive victims of the Germans. Far easier to claim the real problem facing Poland today is actually the “hatred” the Jews feel toward Poles.

President Duda’s campaign of soft Holocaust denial deserves to be condemned by all, Jews and non-Jews alike. But there’s a moral lesson that goes beyond Poland.

Duda is deliberately flattening Jewish and non-Jewish Poles into a universal category of “people who suffered under Nazism,” erasing the fact that there were clear perpetrators and victims.

Something similar is happening in the United States, where Vice President Mike Pence recently refused to say “Black lives matter,” instead insisting, “all lives matter.” Pence’s refusal is not actually about affirming the universal value of human life, but about denying that the United States has a long history of anti-Blackness, institutionalized through federal government policy, which requires specifically pro-Black policies to address its effects today.

The truth is, government policy in the United States has deliberately enforced anti-Black racism for centuries, leading to systemic inequalities in policing, wealth, home ownership, healthcare, and a host of other areas of Black lives. Saying “All lives matter” means denying the historical differences between victims and persecutors in the United States, and the moral demands this history makes upon the present. It means denying the specificity of Black suffering.

It’s no wonder President Trump decided to host President Duda at the White House just four days before the Polish election, a move seen as an attempt to boost the Polish president’s flagging campaign. One can imagine Duda summing up his position on Holocaust memory as “All Poles matter.”

So yes, let’s condemn Duda’s anti-Semitism, and his refusal to accept Polish responsibility for the Holocaust. But let’s not stop there. Let’s learn a lesson about the need to acknowledge the specificity of the historical persecution of marginalized communities, and to provide concrete reparations today.