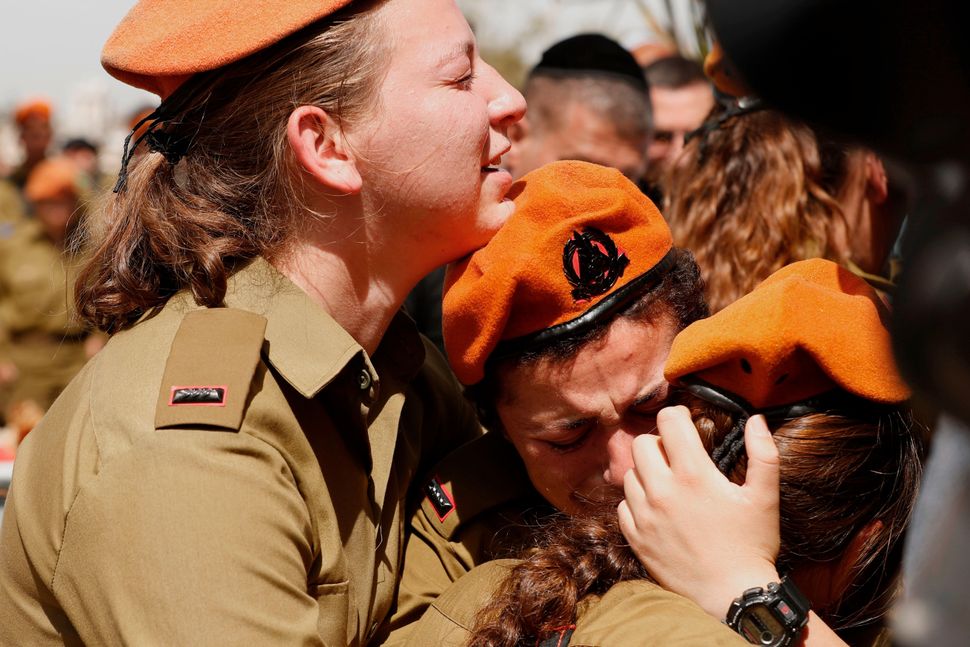 The circumstances of Ahmed Erekat’s killing are in deep dispute. This is one of a number of pieces The Forward is running on his death. For another point of view, click here.

In Israel, announcements of terror attacks and attempted terror attacks at checkpoints come at a disturbing frequency. Between rock throwings, stabbings, and car rammings, it can be multiple times a week. Each one is a potential nightmare for parents; checkpoints are often staffed by our 18-to-21 year old children serving in the military. These border police or soldiers check cars, seeking to protect their country, their families, their mothers and siblings, from terror attacks.

There was a time when terrorist attacks were even more frequent, when they were daily occurrences. Twenty years ago, before the security wall was built, they came in the form of suicide bombings. Restaurants and buses exploded. Hundreds of civilians, of women and children, died at the hands of Palestinian terrorists.

Since the barrier was erected in 2003, these attacks have taken the form of car rammings and stabbings. Rammings are the deliberate attempt to run over Israelis with cars and trucks and even bulldozers. They have killed and maimed many Israelis over the years, like the 2008 attack in Jerusalem in which a driver drove his bulldozer over dozens of civilians in the street and in their cars. Even after being shot, he went on to kill again. A mother threw her baby out of her car window seconds before she was crushed.

In another attack that devastated the nation in 2015, young soldiers on an educational trip were run over by an Arab Israeli driving a truck. He killed four soldiers and injured 13. Drivers of these vehicles have also gotten out of their cabs carrying hatchets or knives, stabbing and mutilating Israelis after their cars have been stopped.

They are less frequent now, thanks in part to authorities erecting concrete barriers and poles in front of hundreds of bus stops in 2015. But the images of these attacks are seared into the consciousnesses of Israelis and are on the minds of soldiers at checkpoints and civilians at bus stops. It is now standard operating procedure to fully neutralize a terrorist for fear that he is either wearing a suicide vest or will continue to try and kill after being shot — as some have done.

This week, another ramming occurred. Video footage shows a car swerving left and then sharply turning right, accelerating into a border policewoman, sending her flying. On the video, you can see the police officers then shoot a man, later identified as Ahmed Erekat, who was fleeing the car.

These videos are not rare. This time, however, the perpetrator was the nephew of Saeb Erakat, a prominent Palestinian figure. He promptly accused Israel of faking the video, and protested his nephew’s innocence. He has continued to rail against what he is calling “murder in cold blood.”

I can only imagine what it feels like to see a family member shot to death. I can only imagine how it feels to truly believe in his innocence. But there is a part to this story that they are not telling, and it does a significant disservice to the Palestinians as a people to hide it.

The truth is, there is a financial incentive to kill Jews; the families of terrorists receive subsidies by the Palestinian Authority. We hear of suicide bombers who have murdered Jews and killed themselves not because they had a murderous desire to hurt people, but rather because they were in a situation from which they saw no escape. Death as a martyr is better than a life of shame.

Video footage Ahmed Erekat recorded seems to indicate that he was in distress. Among other things, he talks about feeling humiliated by reports on social media that he was collaborating with the Israelis. “Your brother is not a spy,” he says. “I never betrayed my homeland.”

His family has claimed that the recording is old, though Ahmed seems to be wearing the same shirt he was killed in, and references the corona pandemic. But it certainly makes it harder to claim that the car ramming was an accident. And it reveals how cynical are the attempts to tie his death to the Black Lives Matter protests in America, as some have done. This isn’t a racial conflict; it’s a national one in which one side is rewarded financially for ramming cars into the other side.

It’s tragic for so many involved — those dying as martyrs because it’s better than living, those killed by mistake like a resident of a Bedouin town who rammed into police officers after being fired at in 2018, and of course, the victims of the attacks.

Facile comparisons that erase violence and trauma are counterproductive. Anyone who wants better for Palestinians should know better, and should resist a culture that asks its people to die while killing ours.