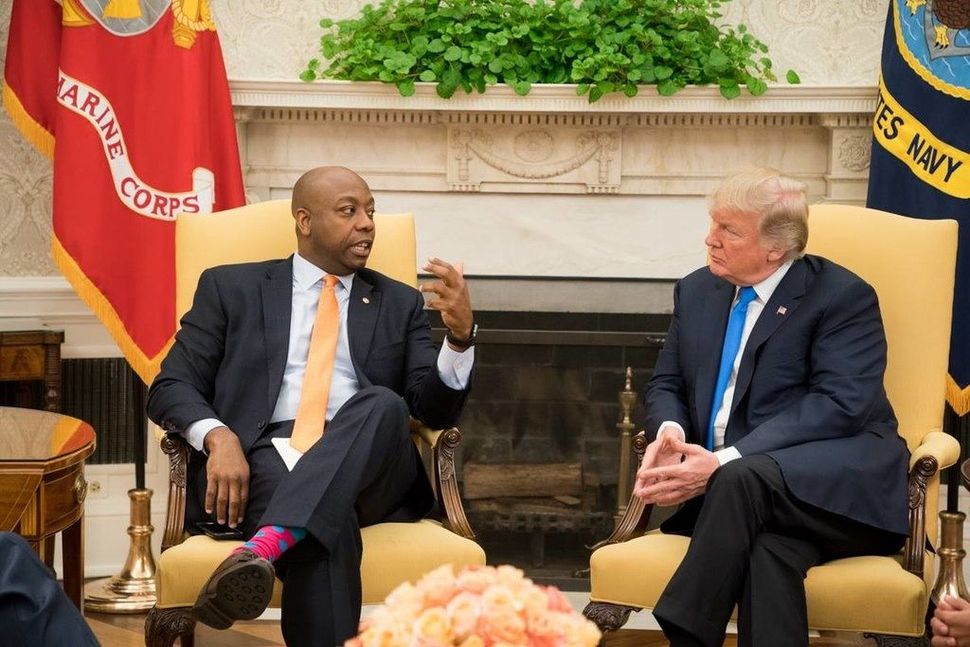 Today, the President once again made a racist statement on Twitter. Tweeting about the only black NASCAR driver, who mistakenly thought a noose was intended as a hate crime against him, Trump then tweeted disapprovingly of NASCAR’s recent decision to ban the Confederate flag. “Flag decision has caused lowest ratings EVER!” He wrote.

Has @BubbaWallace apologized to all of those great NASCAR drivers & officials who came to his aid, stood by his side, & were willing to sacrifice everything for him, only to find out that the whole thing was just another HOAX? That & Flag decision has caused lowest ratings EVER!

It was the latest in a steady stream of racist tweets. It’s not time yet to forget that the president of the United States in a diversifying 21st-century America approvingly retweeted a video which includes one of his apparent supporters yelling “white power.” It’s not time yet to let it become political wallpaper the way so many other racist incidents involving Donald Trump have been, especially given that one of his most consistent enablers is the only black Republican in the Senate. Senator Tim Scott’s refusal to ever fully break with Trump, the most openly bigoted and racist president in modern American politics, is why it will be nearly impossible for him to gain the trust of those he must convince to help usher in what could be a transformational period that includes robust policing reform and a big step towards real racial equality.

Scott doesn’t need to convince white moderates and conservatives. Given that he is this country’s most high-profile black Republican, he already has their ear; they are eager to follow where he leads during a racial reckoning they’ve helped postpone for so long.

Scott needs to convince the rest of us. But he can’t — as long as he remains one of Trump’s most important enablers who every now and again mildly rebukes the president for his latest bigoted policy or racist utterance or act. That truth was underscored when CNN’s Jake Tapper asked Scott to respond to Trump’s decision over the weekend to retweet that “white power” video.

Here’s Scott’s initial answer in all its milquetoast-ness: “There’s no question he should not have retweeted it and he should just take it down.”

Here’s his equally-milquetoast follow-up after Tapper said how he — a white journalist — was definitely offended by what Trump did: “If you watch the entire video, you can’t play it because it was so profanity-laced. The entire thing was offensive. Certainly, the comment about the white power was offensive. There’s no question. We can play politics with it or we can’t. I’m not going to. I think it’s indefensible. We should take it down. That’s what I think.”

Scott is a man of deep Christian faith. His is an inspiring story, the kind conservatives in particular love to repeat at nearly all-white dinner parties and on the floor of Congress as they use his identity as a shield against accusations of racism thrown at the GOP and a sword to get what they want politically.

In their telling, Scott is a Black man from the Deep South who overcame a broken home, poverty and discrimination to make good. He’s the embodiment of the American Dream, a role model, one of the good Blacks who can serve as a guide for lost Blacks, if only they would listen and follow in Scott’s footsteps. He’s spoken eloquently about the times he’s been racially profiled and the backlash he receives for being Black and conservative and still maintains a dignified presence in Congress. He hasn’t allowed his anger to turn into bitterness.

He’s in a difficult position when it comes to race because he is one of a relatively few black Republicans on the national stage, we are constantly told. His base, like Trump’s base, is overwhelmingly white; they overlap in deep red South Carolina. And even if he wanted to go further on things such as the Justice Act, even if his heart and soul cry out for more, he has to walk a fine line if he wants to ever get anything done.

”A rabbi walks into a bar…” Have you heard that one? Join Forverts editor Rukhl Schaechter as she talks to contemporary stars of Yiddish comedy and mavens of Yiddish humor. Don’t worry — the jokes will be fresh. Register for Zoom here.

There’s truth to that. Every Black person trying to navigate overwhelmingly-white places knows that delicate dance well. I know it, and haven’t always navigated it well.

My background is similar to Scott’s, a Black man born into poverty in South Carolina who had to overcome racism while trying to be a unifying voice between black and white people. It’s not an easy row to hoe. But that’s about where my empathy for Scott ends.

Scott is intelligent enough to know that as long as Trump knows Scott will never pull his support, Trump has no incentive to change, to do better, to stop being so casually racist that he doesn’t see why it would be a bad idea to praise white men yelling white power. (The White House claims Trump didn’t notice the “white power” part of the video, which no reasonable person should believe; he later deleted the tweet.) Not only that, Scott is a member-in-good-standing of a party that has for the past half-decade actively tried to make it harder for Black people to vote, which affects the number of Black people eligible to serve on juries, which is one of the reasons the criminal justice system is so full of racial inequities and disparities.

I have no problem believing Scott is a good man. I know he helped craft the Trump Administration’s criminal justice reform law The First Step Act, which shortened the sentences of thousands of prisoners though it does little to transform our unjust system.

But during times as serious as these, good intentions are not enough. Half measures, like those Scott and his Republican Senate colleagues put forth recently concerning police reform, can do more to stunt progress than no measures at all, for they rob us of a sense of urgency. If Scott really wants this to be a transformational period — no matter the cost to his personal political fortunes — he’d do what he should have long ago and stop enabling Trump.

Scott knows that decades-old racial problems have to be pulled up at the roots, an extremely painful process. That’s why I give him little credit for deciding to trim around the edges instead.

When Trump retweeted that “white power” video, it was yet another opportunity for Scott to say enough, to say that he’s done making excuses for Trump’s racism. Instead, he punted and will probably vote for Trump again in November. That’s too bad. We need a voice like his during a time like this. But until he ends his deal with the devil, few of us will want to hear it.