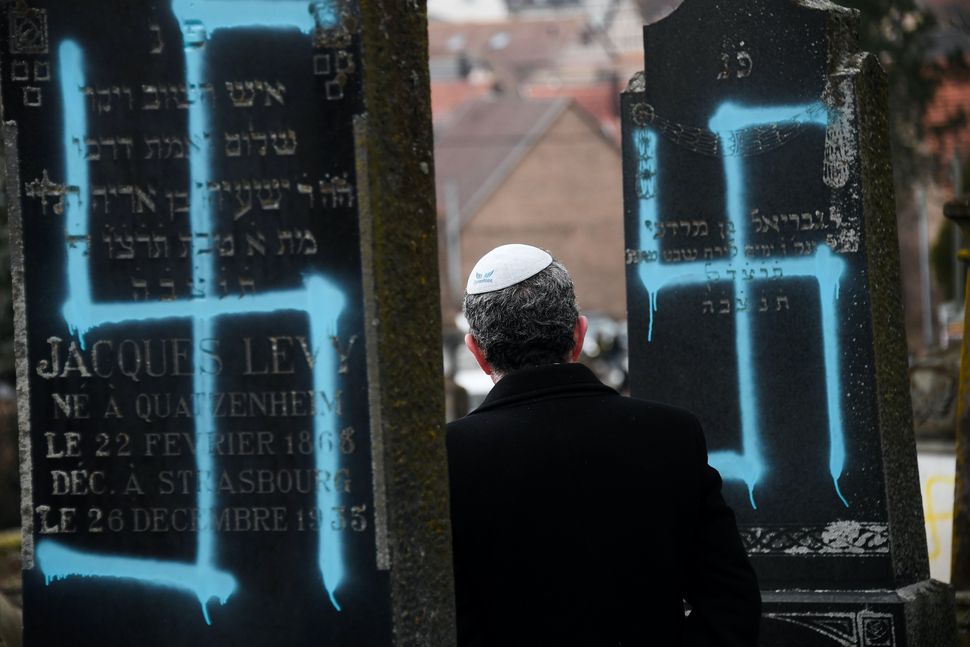 A man walks by graves vandalised with swastikas at the Jewish cemetery in Quatzenheim, on February 19, 2019, on the day of a nationwide marches against a rise in anti-Semitic attacks. – Around 80 graves have been vandalised at the Jewish cemetery in the village of Quatzenheim, close to the border with Germany in the Alsace region, which were discovered early February 19, 2019, according to a statement from the regional security office. (Photo by Frederick FLORIN / AFP) (Photo credit should read FREDERICK FLORIN/AFP via Getty Images) Image by Getty Images

Should we capitalize the “b” in Black? Hundreds of publications across the country, including bellwethers like The New York Times and Associated Press, have adjusted their style guides, arguing that capital-B Black reflects a common identity and heritage.

It’s time for a similarly introspective debate about the language we use to describe discrimination against Jews.

Most leading authorities and publications use “anti-Semitism.” I prefer “antisemitism,” the spelling used by the International Holocaust Remembrance Alliance. But this debate obscures the core issue: Whether spelled anti-Semitism or antisemitism, we should retire the term entirely and begin calling it what it really is: Jew hatred.

Consider the history of the word. While the phenomenon of Jew hatred is inscribed in ancient texts, the term “anti-Semitism” is actually of relatively recent vintage, about as old as the telephone or the lightbulb. The German journalist Wilhelm Marr coined the term “anti-Semitism” in 1879 to give an air of modernity to long-embraced animosity toward the Jewish people.

Earlier Germans were blunter: They called it “Judenhaas,” literally Jew-hatred. Wilhelm, himself a deeply anti-Jewish political agitator, sought a pseudo-scientific and therefore more palatable word. He knew the term “Semitic” had historically referred to a family of languages that originated in the Middle East. So he refashioned the word to mean prejudice against Jews alone.

In his 1880 bestselling propagandist pamphlet, “The Way to Victory of the Germanic Spirit over the Jewish Spirit,” Wilhelm freely used the German term “antisemitismus.” And in the same year, Wilhelm founded the Antisemitenliga, the League of Antisemites, the first organization committed to combating the alleged Jewish takeover of Germany and German culture.

In other words, the term “anti-Semitism” was coined not to marginalize Jew hatred but to mainstream it.

As the “Jewish question” came to the forefront of politics, violence took the place of rhetoric. In 1881, a wave of anti-Jewish uprisings swept across present-day Ukraine and Poland. Rioters defaced synagogues, destroyed Jewish homes and businesses, and murdered thousands of innocent Jews through the early 20th century. The surge in anti-Jewish violence ultimately culminated in the Holocaust, dreamed up and set into motion less than 200 miles from where Wilhelm first preached his antisemitismus sixty years prior.

The term anti-Semitism is also imprecise and ripe for misunderstanding. The original word Semite traces its roots to Noah’s son in the Bible, Shem. Semite first came to label members of groups who spoke Hebrew, Arabic and other related languages, and some Arab leaders have hid behind this literal definition to justify their Jew hatred, arguing they cannot be anti-Semitic because they, too, are Semites.

Thus, at a moment when clarity in exposing and opposing bigotry is urgently needed, the term’s 19th century pseudo-scientific origins lead to modern-day confusion.

For this reason, when forced to choose between spellings, I choose “antisemitism.” The hyphenated spelling gives off the impression that the entity “Semite” in fact exists, which it doesn’t. But whether spelled antisemitism or anti-Semitism, neither does justice to the evil that is Jew hatred.

While the word is cloudy and euphemistic, the growing phenomenon of violence against Jews is all too real. The Anti-Defamation League reports there were 2,107 hate crimes against Jewish people in the United States in 2019, the highest number since they began counting in 1979. Worldwide, anti-Jewish crimes increased 18% in 2019 and 13% the year prior. This violence has many causes. But the words we use to describe it matter.

Jews and non-Jews alike must fight back against these alarming trends. We’ve seen that when boundaries around discrimination are broken down, everyone is affected. Anti-Jewish sentiment is the canary in the coal mine of societal violence. Once Jews are scapegoated, that antagonism almost always spreads to others. We have a collective responsibility, and a collective self-interest, in fighting this bigotry.

The Black Lives Matter movement has reminded us all of the power of solidarity against bigotry. The killing of Black Americans drove the protests. But the outpouring of support from so many races, ethnicities, and religions who joined the demonstrations, myself included, showed that discrimination against one group is a threat to everyone, and progress against injustice is a benefit to us all.

At this moment when Americans and others are reimagining how we talk, think, and act to take on entrenched bigotry, the first step is seeing the problem clearly.

In this case, it’s neither antisemitism nor anti-Semitism: It’s plain and simple Jew hatred.