What we lose when we turn our backs on persuasion

If we lose touch with Peitho, we divide into clans that resemble each other only in our mutual hatred and disgust. Image by Angelie Zaslavsky

When the sophist Gorgias (5th century BCE) defended one of the most maligned women in mythology — Helen, who absconded to Troy with her lover, Paris, setting in motion the Trojan war — Gorgias claimed that Helen wasn’t culpable. Not because she’d been abducted by force, but because she’d been powerfully persuaded.

What did he mean? How could being persuaded absolve her of responsibility?

In some translations, Gorgias explains that Helen was “seduced” by words. Today, we make a vital distinction between being forced to do something and taking voluntary action. But as the Greeks knew, a seduction is compelling. Although we are not forced, we can feel as though we are powerless in the heat of passion.

Perhaps that is why the power of persuasion in classical antiquity was considered so great that Persuasion herself, Peitho, was elevated to the status of a goddess. Fittingly, she was also the goddess of seduction. 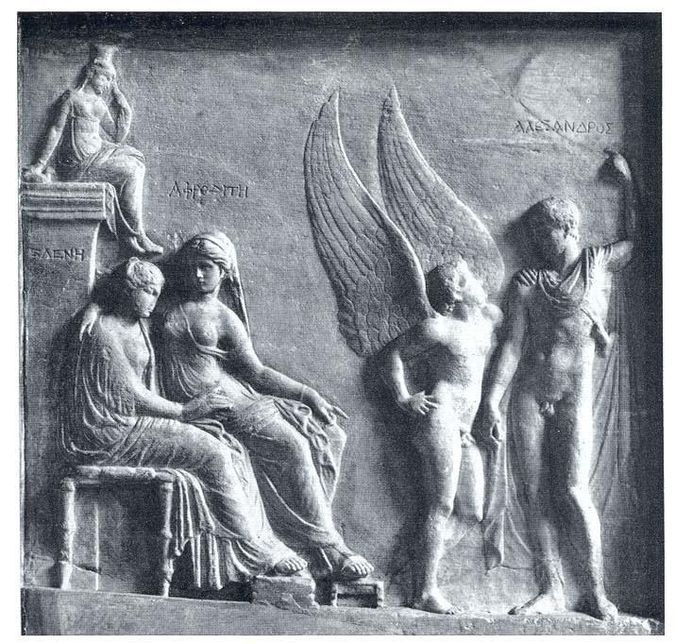 Peitho sits pensively atop a column in the upper left background of a first century relief. Seated in the left foreground are Helen (of Fall of Troy fame) and Aphrodite; to the right stand Eros and Paris.

In a recent online master class on the art of political persuasion, New York Times columnist Bret Stephens told a 92nd Street Y audience that a successful argument is “a zero-sum game in which one side wins and the other side loses” whereas successful persuasion “does not defeat, it entices.”

In our own lives, it might be useful to consider the psychology of persuasion as distinct from the psychology of argument. If we want to change the mind of our beloved, do we attack their thinking? Do we shoot them down? Do we overpower them with our intellectual prowess until they admit defeat?

Maybe not if we want to live together in peace.

As Philosopher Mark Johnson and Linguist George Lakoff posit, “Our ordinary conceptual system, in terms of which we both think and act, is fundamentally metaphorical in nature,” and “the ARGUMENT IS WAR metaphor is one that we live by in this culture.”

Meanwhile, what has happened to Peitho in this culture? She seems to have disappeared. Certainly, she has lost her pedestal. Perhaps this is because seduction is manifestly personal, and particularly in the era of social media, the personal has been eclipsed by the performative.

Where persuasion involves a dialogue in which each speaker’s words are intended for the elucidation of the other, argument can become a performative battle in which interlocutors are taken down for the amusement of onlookers. We frequently see argumentum ad hominem — argument against the person rather than against the idea. On social media, this can look like accusations of moral transgressions, public shaming, and calls for vengeance circulated with zeal by a crowd that applauds a metaphorical gladiatorial contest through likes, comments, and retweets.

To make matters worse, we have begun to act as if opinions are not legitimately susceptible to change. Instead, they are understood as manifestations of the thinker’s identity. When opinions and beliefs are no longer objects of thought that can be analyzed and examined, rejected or taken up, and are instead indistinguishable from the thinker, then there is no lover to seduce, no thinker to persuade. There are only ideas to kill and tribes to conquer.

This is particularly troubling because, as history illustrates, it is often those most preoccupied with policing others’ morals and beliefs who denigrate, humiliate, and dehumanize others — all in the name of decency and the good society.

If we lose touch with Peitho, instead of accepting the inevitability of differences in a liberal, pluralist democracy, we divide into clans that are fairly identical in mutual hatred, disgust, and the unshakeable conviction that “we” are good and “they” are evil.

Those who attempt to use persuasion in the presence of thinkers who see things this way can encounter the kind of incredulity that a Crusader might have felt upon meeting a Medieval Christian who, instead of marching off to slaughter Muslims and Jews, set off laden with gifts and an impassioned invitation to voluntarily accept the Christian God.

But there is a way of engaging in disagreement that has elements of both argument and persuasion, and so might satisfy the psychological desire for battle as well as the need for connection and belonging — without resorting to personal attacks and calls for retribution.

It requires intellectual humility, a sense of common humanity, and an appreciation of the dignity of our interlocutors. It relies on the understanding that when intellectual opponents act as thinking partners rather than enemies, opposing arguments can act as sharpening stones for our own points as we attack one another’s ideas, while appreciating one another as thinkers.

We each improve our reasoning and judgment as we engage in this kind of argument — when the ultimate purpose of the argument is not to win admirers, humiliate an opponent, or even defeat ideas, but to get closer to the truth.

This aligns with the Jewish concept of machloket l’shem shamayim— argument for the sake of Heaven. It begins with a commitment to the relationship between intellectual opponents. Conversational partners must see interlocutors as valuable, unique, persuadable thinkers, not examples or instances of identities. And each of us must be persuadable thinkers, too.

But this method of productive disagreement between fellow truth-seekers requires the ability to listen. And this is the real challenge of Peitho. Because listening, as civil rights activist William Stringfellow knew, “is a primitive act of love.”

“You cannot listen to the word another is speaking,” he wrote, “if you are trying to decide what you are going to say when the other stops talking, or if you are debating about whether the word being spoken is true or relevant or agreeable. Such matters may have their place, but only after listening to the word as the word is being uttered.”

This ability to listen requires seeing ourselves and our intellectual opponents as imperfect, fallible, and fundamentally human (even if they don’t initially see us that way). And it requires embracing disagreement — even about the things we hold most dear — as a necessary element of a functioning democracy.

None of this is easy. But without it, any hope of a liberal, pluralist democracy is lost.

Pamela Paresky is a psychologist and a visiting lecturer at the University of Chicago where she is researching academic innovation at the Stevanovich Institute on the Formation of Knowledge. Follow her on Twitter @PamelaParesky

Shadi Bartsch is a professor of Classics and the director of the Stevanovich Institute on the Formation of Knowledge at the University of Chicago. Her translation of Vergil’s The Aeneid is due to be released in October. Follow her on Twitter @ShadiBartsch

What we lose when we turn our backs on persuasion