Anti-Semitism thrives on rumor. Trump is a rumor machine. 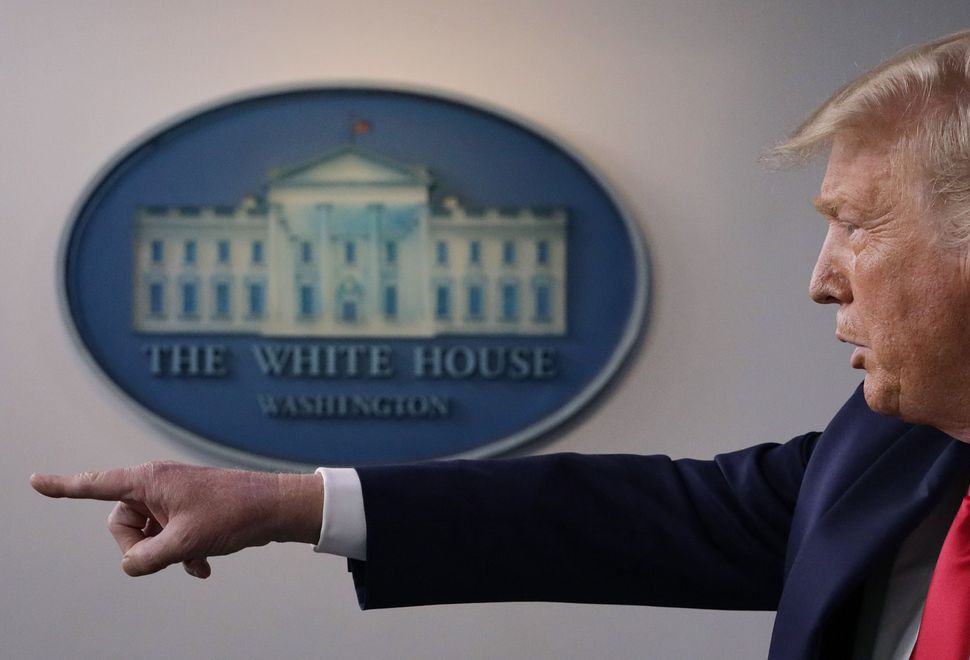 American Jews (Republican and Democrat alike) have made a habit in the last four years of trying to work out the relationship between Trump and anti-Semitism. We normally do this by carefully reading the tea leaves left out in the news.

What does it mean when the White House—but not the president—gives press credentials to a pastor who then called COVID19 a divine judgment on the Jews? What does it mean that Trump praised Henry Ford (publisher of the Protocols of the Elders of Zion) by saying he had “good bloodlines”?

Things like that. Even Trump’s Jewish supporters look to these odd signs, if only from a need to explain them. What does it all mean? What is behind it?

Jews got another big clue this week, and it had nothing to do with religion. Trump once again defended the idea that hydroxychloroquine can prevent COVID19. The drug is unproven as an effective coronavirus treatment, and it has potentially fatal side effects.

President Trump took the drug for fourteen days. His reasoning, explained at length to the press in May, was also puzzling: “I’ve heard good things about it.”

He didn’t explain further. He didn’t say who he heard it from. He also said that “many doctors” promote it, even though the doctors who tested it have claimed it doesn’t treat COVID19 and it can potentially kill patients. It’s not even clear whether people actually told Trump anything about the drug, or if it was a snippet of a conversation that lodged in his memory.

But whether it was true, or where it came from, didn’t matter. What mattered was he heard it.

Somehow, he heard it, it made sense to him, and then he risked his life by taking an unproven drug.

Most anti-Semites don’t start out reading the “Protocols of the Elders of Zion” or joining the Klan. They start about by hearing something vague, from “other people,” persistent rumors, about Jews. They hear a lot of bad things about Jewish banks, Jewish blood guilt, Jewish conspiracies. With the rise of social media, these kinds of faceless, floating stories have multiplied a thousand fold.

These things aren’t provable, but anti-Semitism doesn’t rely on facts or science or logic. Anti-Semitism explains problems through free association: Bad things are happening to America. Someone must be to blame. I’ve heard a lot of bad things about the Jews. It’s because of the Jews.

The problem is not whether Trump actively hates the Jews. That question is both poisonous and unanswerable.

But Trump does make decisions in a way that favors anti-Semitism. In May, he “heard good things” about an unproven drug, so he took it. He keeps on promoting it, even when people have told him the drug doesn’t work.

What happens when he “hears bad things” about Jews?

In that sense, trying to read the tea leaves to determine the relative influence of anti-Semitism in the administration is a waste of time. If Trump gets an idea in his head, he will act on it. The facts will not matter. He will pursue anti-Semitic objectives if and when he “hears about it”—and Republicans and Democrats alike know that he does indeed hear things from known anti-Semites. Nor will the presence of Jews in the White House act as a failsafe; when Trump decides, the discussion is over. (American anti-Semites traditionally keep a few Jews around. Even Charles Lindbergh thought some Jews were useful, just not most of us.)

The notion that American Jews can finagle their way through the anti-Semitic moments of the Trump administration to garner support for Israel follows the same logic of Trump advisors who begged him to stop talking about hydroxychloroquine. They, too, were telling Trump true things that doubled as good political advice. And then Trump “heard good things.” And then he followed an insane policy.

If Trump decides Jews are bad for America, he will pursue that objective. And there is no way to know when he might pursue such an objective, because no one is in charge of what good things or bad things the president decides are true.

American Jews oppose Trump by a three-to-one margin. Those who support him still keep a wary eye on those tea leaves. But those who plan to oppose him in November should redouble our efforts to reach out (kindly) to the other side. Trump’s decision to take a potentially lethal drug in the midst of a pandemic is far more indicative of the risk posed to American Jews.

For Republican Jews, this will be a difficult choice to make. But if we mean to fight anti-Semitism, then we need not just to keep our eye on how leaders respond to Jews, but how they respond to rumor. Trump has badly failed on that count.

Adam Jortner is a historian teaching at Auburn University. He has written several books on religion, rumor, and violence, including The Gods of Prophetstown and Blood from the Sky. He is the author the forthcoming Promised Land, a history of Jews in the American Revolution.

Anti-Semitism thrives on rumor. Trump is a rumor machine.