The real lesson of Seth Rogen? If you want your kids to love Israel, tell the truth. 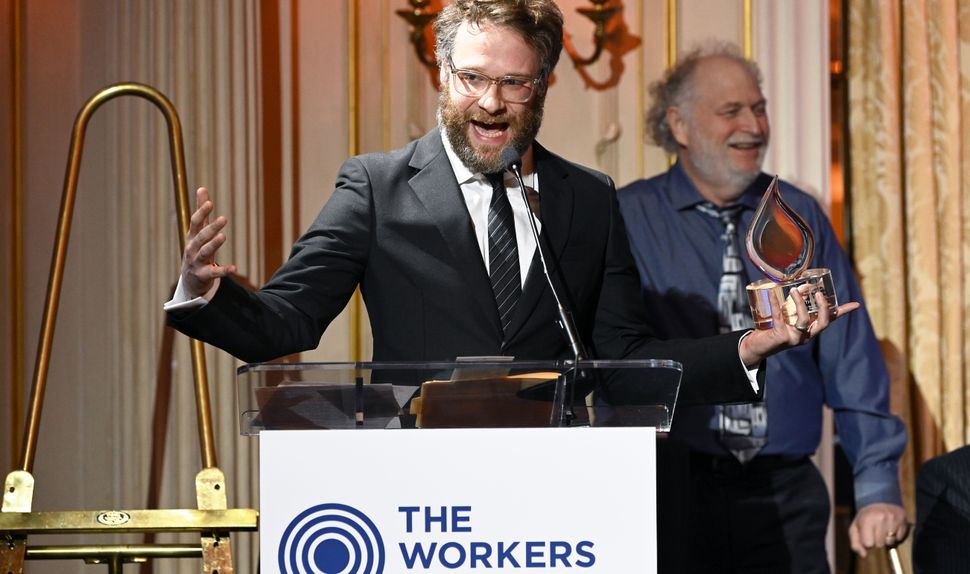 “I was fed a huge amount of lies about Israel my entire life,” Seth Rogen said in his now infamous interview with podcaster Marc Maron.

These words hit me, a Jewish history teacher, like a ton of bricks, far more than any of the other offensive or misinformed comments he made elsewhere in the podcast. Here’s why: he could not have been wrong on that point. For Rogen to express the various views he espoused on Maron’s podcast, he had to have been grotesquely misinformed on a range of Israeli and Zionist issues. For a man who — I assume — stamped on a glass at his wedding to commemorate the destruction of the Temple of Jerusalem to claim to be perplexed as to why Jews long for both Jerusalem and Israel at large shows me clearly that my colleagues failed him.

For the proud product of Jewish day schools and Jewish camps to claim that he had been fed the “empty land” narrative, or to deny or ignore the deep historical Jewish connection to Eretz Israel so profoundly, or even to speak in terms that are so thoroughly Ashkenormative, is deeply concerning.

I am a millennial, a progressive Zionist, and a full time History educator at a Jewish day school. As part of my job, I teach the history of Israel. I relish this task.

I relish it, because if there’s one thing I’ve learned, it’s that too many curricula are presenting a version of history that is so deeply biased as to be close to a lie. They are based off of blatant propaganda and tend to erase the nuance and complexity of the region, its history and especially its current affairs.

Fortunately (or unfortunately, depending on one’s viewpoint), we live in a world where teenagers and young adults can access ever increasing amounts of information on the Internet. And an oft repeated claim, for example, that “there was no such thing as the Palestinian people before the British arrived” is simply not going to fly with young critical thinkers who have unfettered access to the Internet.

Within a few clicks, they’ll find information that clearly shows communities of people lived in the area, loved it and considered it their land for many generations.

With a few more clicks, they’ll find out that many communities of Arabs fled the area in 1948, for a host of reasons, and were denied the right to return. To acknowledge these facts is not to undermine the indigeneity of Jews to Eretz Israel, but rather to highlight the need for nuance and compassion and difficult conversations.

The curriculum I use for teaching Zionism to my classes leans into this, so I know I’m not alone in feeling an overwhelming thirst for complex conversations. Unpacked for Educators provides tools that show the story of Israel in ways that are nuanced and often expressly challenging. They include, for example, a video on Baruch Goldstein and ask students to think broadly about Jewish terrorism.

“While Jewish acts of terror are few and far between,” they write, “they do occur from time to time. How does it make you feel when a fellow Jew carries out a heinous crime? Does it affect how you view Palestinian terror?”

Other learning tools speak to disagreements between groups of Israelis and groups of Zionists. Unpacked refuses to tell students a monolithic story, but rather asks them to engage with a multi-faceted history.

No country or nation is perfect. Pretending that the modern nation state of Israel is perfect or ever was perfect will only mean Israel continues to lose support from young people, who are growing up in an age of fake news and a rising need for media literacy (the latter is very much being pitched within day schools).

Now, I’m not claiming the curricular resources we use give the whole picture. In fact, I think it’s valid and vital to bring in other tools into classrooms and to discuss them.

In particular, the experiences of Mizrahim prior to and since the foundation of the modern state of Israel need to be taught more commonly in day schools. Too many diasporic Jews lack basic facts on demographics within Israel, where Mizrahi Jews make up the largest single demographic group, or erase the colorism and discrimination that colors its modern society and allows for an international white-washing of Israel.

Too many diasporic Jews know of pogroms in Eastern Europe but not of pogroms in the Ottoman Empire. On further notes of white-washing, few of us know anything of Beta Israel prior to Operation Solomon. That’s a concern, especially if we’re going to bring up the highly successful rescue mission as a source of pride.

These are not easy discussions, but if we want to raise proud Zionists, then they need to be had.

I do not believe that it is enough to merely rely on day schools or camps. Especially amidst this pandemic, where many of those institutions are operating in a limited capacity, I think these are debates and conversations that need to be held over Shabbos dinners and beyond. We have to encourage our young people to engage in debate and discussion; we have to continue learning and teaching.

With anti-Semites continuously weaponizing Israel for their own agenda, we urgently need to develop pride in and love for Israel amongst our youth, both my own age group and those I teach. But we will not achieve this by spoon-feeding them a simplistic narrative and then expecting them to remain proud Zionists — especially not when we know that they will reach college campuses where that identity — as well as their broader Jewish identity — will be attacked over and over again.

We cannot allow the other side’s propaganda to expose our own biases and limitations. We owe our children the truth, however complicated and nuanced that truth often is. We have to be willing to have difficult conversations and to inspire children to love Eretz Israel, not because it’s perfect, but because it is our home.

So this coming Shabbos, raise some of these questions with your children. You can even use Rogen’s controversial interview as the entry point. Let’s each one of us work to ensure that 20 years from now, no Jewish celebrity will be announcing they felt lied to.

Natasha Skoryk is a history educator at a Jewish day school.

The real lesson of Seth Rogen? If you want your kids to love Israel, tell the truth.