Why does the Democratic Party – like American Jewish institutions – refuse to condemn the occupation? 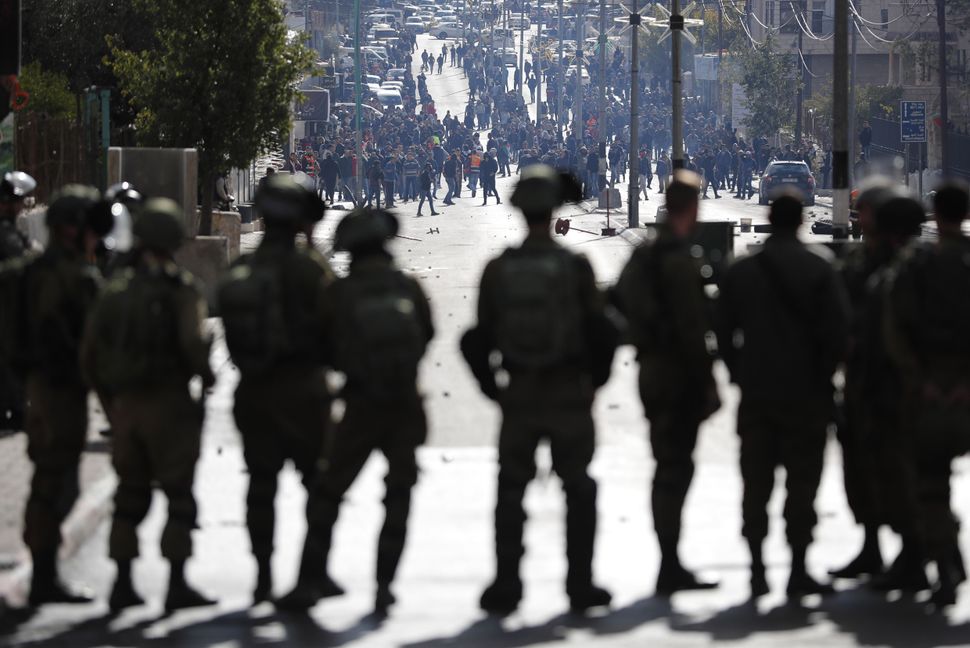 This week, the Democratic party rejected adding the word “occupation” to its official party platform on Israel. Many seemed to consider this term a political statement, rather than what it is — a neutral description of a category in international law, which defines occupied territory as that “placed under the authority of the hostile army.” An occupation may be justified or not, legal or not, but if it meets the legal definition, it is an occupation.

The Democratic party’s reluctance to employ this term points to the success of the Israeli right in offering “alternative” language to intentionally shift the terms of the debate. Thus, even while the Israeli High Court has affirmed the accuracy of the term “occupation” to describe Israel’s control over the West Bank, the Israeli right has persuaded much of the world, including many liberal Jews, that this legal term is a controversial one.

This summer, we have seen a similar battle of rhetoric play out in the American Jewish community around Israel’s plan to annex parts of the West Bank. A document circulated in late June by the Jewish Federations of North America is an example of the problem. This JFNA “Fact Sheet” refers to “annexation” as the term “used in mainstream media to describe what Israelis call ‘applied sovereignty’.” It then misleadingly suggests that the terms “annexation” and “applying sovereignty” can be used interchangeably, with little consequence.

In fact, “annexation” is the technical legal term for the acquisition of land, generally through warfare. “Applied sovereignty” is a made-up term created to obfuscate the fact that the Israeli government is threatening to violate international law.

This “both sides” approach has been the modus operandi of American Jewish legacy organizations for decades when it comes to Israeli policies that make them uncomfortable. While purporting to operate above the fray, they instead present a false choice: between simple description on the one hand and slippery rebranding on the other.

The Israeli right has been using this spin-doctored language of “applied sovereignty” for over a decade. Indeed, Danny Danon, Israel’s hardline right-wing Ambassador to the United Nations, recently wrote an op-ed making this precise linguistic argument: that the term “annexation” should not be used, and that the only appropriate phrase is “extending Israeli sovereignty.”

But these semantic games have always represented a blatant attempt to disguise extreme moves with gentler terminology. In presenting “applied sovereignty” as an equally acceptable option, JFNA fell into a trap set by the Netanyahu government and his right wing allies, who prefer to describe annexation with language that obscures and disguises its potential disastrous consequences.

There is little doubt as to why the annexationist right wants to avoid the words “unilateral annexation.” “Annexation” is a scary word. It implies a land grab; it conjures up Russia’s illegal annexation of Crimea or India’s annexation of Kashmir, both resoundingly condemned as a dramatic violation of international law.

The United Nations Security Council has affirmed the “inadmissibility of the acquisition of territory by war or force” — that is, annexation — eight times, most recently in 2016.

It’s no wonder that the current government of Israel doesn’t want to use this term and prefers one that deflects, distracts, and makes palatable the otherwise unpalatable. But our American Jewish institutions should not be party to this attempt to disguise and rationalize disastrous Israeli policies with which they do not even agree.

Responses to planned annexation in the institutional American Jewish community have run the gamut. The Reform and Conservative movements have issued statements in opposition, predicated on concern for preserving a path to a two-state solution. The Progressive Israel Network [of which the New Israel Fund and T’ruah are both members] has warned that unilateral annexation would cut the heart out of Israeli democracy and relegate Palestinians to a future of perpetual statelessness.

Yet other Jewish communal institutions have hedged. Their responses have ranged from “criticism is allowed, as long as there are no real consequences,” to “we are opposed to annexation, but we’ll defend Israel despite ourselves.” And, of course, there is JFNA’s stated attempt to present “both sides,” even while parroting right wing language.

What we are seeing is a community in disarray, overwhelmingly opposed to unilateral Israeli annexation in private, but unwilling to make much of its opposition public. Annexation, after all, puts these organizations in a very uncomfortable position: They have for decades officially supported a negotiated settlement and a two-state solution. The prospect of unilateral annexation is forcing Jewish institutions to confront the reality of an Israeli government that no longer shares these goals.

In many ways, the current disarray was inevitable. Many American Jewish institutions have for too long tacitly condoned Israel’s ongoing military occupation. For decades, they have not acknowledged, much less condemned, the damage done to Israel’s reputation and its democracy by the ongoing settlement enterprise, and the violations of Palestinian human rights that occur daily in the West Bank. As evidenced by the debate over the Democratic platform, many still consider the word “occupation” impermissible even after late Prime Minister Ariel Sharon himself used the term from the Knesset podium in 2003.

Instead, they employ language that conceals reality. Twisting ourselves into moral pretzels to avoid speaking truth to our dearest friends may serve to avoid uncomfortable conversations, but in the end, it only serves to enable behavior that’s bad for Israelis, for Palestinians, and for the American Jewish community.

Our community has woken up to the damage that annexation would bring to both Palestinians and Israelis.

We should say loud and clear that we oppose annexation because it’s bad for Palestinians and Israelis. But we should also see the occupation for what it is. We can recognize that failing to acknowledge occupation, as the Democratic Party platform does, is itself a rhetorical sleight of hand, an obfuscation promoted by the Israeli right in a conflict where words matter. Rather than fall into the trap set by apologists for bad policies, we should devote our moral voices to preventing one and ending the other.

Daniel Sokatch is the CEO of the New Israel Fund. Rabbi Jill Jacobs is the Executive Director of T’ruah: The Rabbinic Call for Human Rights.

Why does the Democratic Party – like American Jewish institutions – refuse to condemn the occupation?