Amar’e Stoudemire is sparking joy for Haredi Jews like me 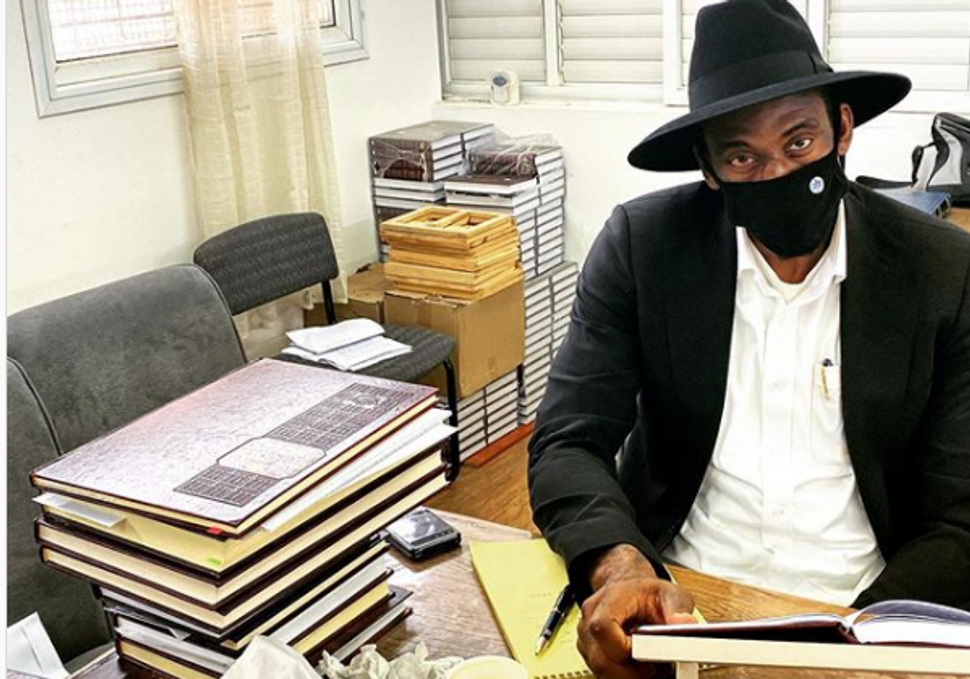 In a world that continues to produce social media celebrities and superstars at a dizzying pace, it’s hard for me to bring myself to get excited about anyone’s social media posts. Increasingly, social media has become a toxic sphere, filled with self-centered shallowness and one-upmanship, with extraordinarily little else. I can always pass on that.

But there is always an exception which proves the rule.

I am not on Instagram, but I have friends who excitedly text me whenever former New York Knicks star Amar’e Stoudemire posts something on his social media. Similarly, whenever he speaks to the press about his life, I inevitably get the article forwarded to me by several different of my friends.

Watching Stoudemire, who left the NBA in 2016 and went to play basketball in Israel, share his journey of what seems to be a Haredi transition on social media brings me and my friends an inexplicable joy.

Whether it is the visual of a black hat-bedecked Stoudemire sitting at a table with a pile of Seforim next to him, or taking a stroll through Mamilla in Jerusalem with his shirt untucked and a cigar in his hand (we’ve all been there), or whether it’s his visits to a Haredi Bais Din in Bnei Brak, or his description of how Torah learning and praying three times daily has changed his life, I find myself captivated by his story like none other I can remember.

It’s hard to explain why this is the case. I did not understand it at first. Why should it make a difference to me? After thinking about it a lot, I’ve come to believe that it’s because Amar’e’s journey to Judaism is more personal than I thought.

Growing up as a child of New York in the 90s was simply nirvana for a sports fan. Almost all the teams I had chosen to root for were on the top of their sport, providing me with a veritable smorgasbord of sports excellence to live through vicariously.

And that, after all, is what sports are about: fans living through “their” team vicariously. There is the simplicity of feelings of solidarity, of being a part of something bigger than yourself, and the human experiences of winning (success) or losing (failure), as well as the more complex identification with the personalities that their teams take on.

I have outgrown the more intense parts of sports fandom, replacing many of those feelings with things I now consider more meaningful. And yet, despite that, the general sense of “fandom” does remain.

In particular, I can still call up those feelings for the New York Knicks. When I was growing up, the team’s personality was all about toughness. They were never the most talented team. But somehow, Knicks like Patrick Ewing, Charles Oakley, John Starks, and Anthony Mason always had that swagger that told you they never thought it mattered.

That grit ensured meaningful playoff basketball (showdowns with Michael Jordan’s Bulls, mostly), and it took them — and us — to the NBA Finals twice. While they never quite made it over the hump and won, that was just who they were, and it was fine.

But then there came the next decade where all the toughness and grit left them. They became (and still are) the perennial laughingstock of the league. While that status remains today, there was a slight pause, beginning after the 2010 season, when a mega free agent class changed the NBA forever.

That was the year Lebron James and Chris Bosch joined Dwayne Wade in Miami to create a “Big Three” of superstars on a team, which would net them two of the next four championships. The Knicks had prepared themselves to make that kind of splash that year but they were turned down by virtually every suitor.

Amar’e Stoudemire took New York City by storm. It didn’t matter anymore that it seemed like nobody wanted to come here to play. It didn’t matter that Amar’e himself was coming off injuries, which meant no other team would pay him the way the Knicks did, and he only came here because he had no other real offers. What mattered was that he came — and the joy with which he embraced the City was reciprocated.

Because that’s what it was ultimately all about: Unlike other stars, he wasn’t here begrudgingly. Once he was here, he make us feel like he wanted to be here, and that made us feel both validated and hopeful for the future.

I think that also plays a part in my joy in following his personal story. Just like he chose the Knicks, and did so with grace and delight, now it seems like Amar’e is choosing us, in what seems like a conversion.

As Haredi Jews, how often do we get to experience someone with as high a profile as Amar’e Stoudemire choosing to be a part of our way of life, embracing our often-derided truth precisely as it is meant to be?

I don’t know if I’ve said this before (jk I know I have) but if anyone can set me up as a Chavrusa with @Amareisreal I’ll be your best friend.

My man here is all-in. He even is doing that Yeshivish thing where you de-yeshivishize your pronunciation for a non-Frum audience. pic.twitter.com/XLHrZJNEce

The only difference is that this time, he’s not doing it with the added incentive of a monetary payday, but rather, with the recognition of the richness of our way of life, and his desire to make our truth his truth.

We Jews often see ourselves as a people 2,000 years removed from any sort of glory days, 2,000 years marked by oppression and massacres. Marked by an anti-Semitism we are after only a brief respite once again beginning to experience daily.

And just as things have begun to go south for us, someone amazing has chosen to join us.

There’s no fame or the glory inherent in it. He’s doing it because he wants to be part of this special bond with God that we have.

That Stoudemire began his spiritual journey a decade ago as a Black Hebrew Israelite, a movement with overtly anti-Semitic sects that the Jersey City massacre’s appear to have been connected to, gives the whole story an even more moving valence.

I don’t know where Amare’s journey will take him, nor do I presume to know how his story will end. But as he embraces truth itself, I can only do this: love him like a newly discovered brother I had only ever known from a distance, and pray that he continues to grow on this never-ending voyage we call life.

Amar’e Stoudemire is sparking joy for Haredi Jews like me