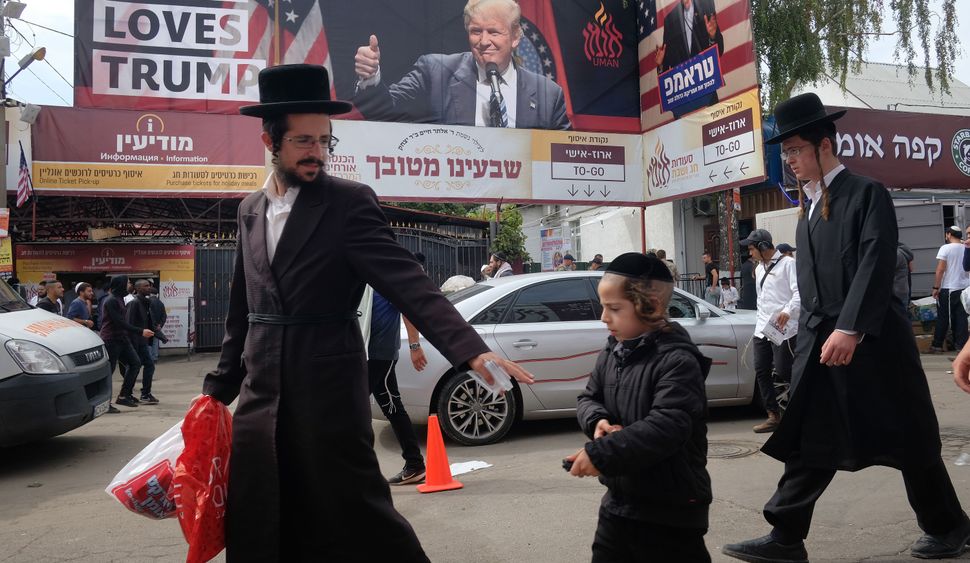 Recently, a handful of concerned Orthodox Jews, myself among them, wrote an open letter to the larger Orthodox community. It was titled “Sinai, Not Washington,” and its message was simple: “The unhealthy intertwining of Torah values and politics brings disrepute to Torah and harm to Torah Jews.”

We had begun to witness some of the ugliness of contemporary American politics in certain corners of our own Orthodox world. It seemed to us that true Jewish ideals were being de-emphasized as a result. Dismayed, we urged our fellow Orthodox Jews to eschew partisan attacks and hyper-politicized identities. We should be guided by the Torah, we argued, not the Republican Party — or the Democratic Party, for that matter.

So we were surprised when we were accused of a partisan political attack.

It was the opposite of what we had written. The letter decried not only the perniciousness of rabid partisanship but also efforts to use Israel as a partisan political weapon. It bemoaned the corrosive effect of buying into the contemporary version of Roman-era gladiator games, the cheering on of politicians of whatever persuasion and their talk-show host surrogates as they lustily hack away at the limbs of their mortal adversaries. The cheering not only debases us; it is poison to our young.

Orthodox Jews, we wrote, must set a positive, Torah-based, example for all Americans, standing for principles, not parties, and expressing ideas with civility and respect.

Such thoughts shouldn’t be controversial in the Orthodox world, nor the larger Jewish one.

We took pains, moreover, to state explicitly that nothing in the letter was intended to address anyone’s voting choices. The moral degradation in the political realm “infects a broad swath of the American political spectrum,” and “in the camps of both liberals and conservatives, many political players are on a hyper-partisan quest for victory at all costs.”

Our letter did elicit a small avalanche of positive responses. A common one we received was along the lines of “I’m so glad you said what I have wanted to say for so long but have been afraid to.” But it also yielded some angry accusations of… our own partisanship. We were accused, falsely, of trying to tell people to vote against President Trump in November.

We did lament the effect on us all of the devaluation of “good character and benevolent governance.” We also wrote disapprovingly of the fact that contrition has come to be seen as weakness and “humility is confused with humiliation.” We also wrote of our dismay that politicians and media figures seem to revel in conspiracy theories and divisiveness, and in “shameless dissembling.”

We wrote of how much it hurts us to see these things seep into our community — which was viewed by some as a political ad for the Democrats.

It’s something of an own goal if you identify your candidate with lies and conspiracies. But more importantly, the blowback actually made our point for us: that, in our politically high-strung, hair trigger times, people regard anything they read through a distorting political lens.

To be sure, a case can be made that the current president has taken the most lamentable aspects of politics to new levels. One can argue that the past few years’ excesses are worse than those that preceded them, not only in degree but in kind.

But it has been a long time, if ever there was such a time, since Orthodox Jews voted on the basis of a candidate’s character. We vote what we perceive to be in our own, and the nation’s, best interests.

We signatories were not focused on the tenor of the times per se, but on the effect we see it having on otherwise Torah-focused Jews and their families.

We never inquired about each other’s voting plans, and fully recognize that some Orthodox Jews feel strongly that the President’s actions with regard to Israel and religious liberty issues have earned their support.

But at the same time, we also know that other Orthodox Jews fear the president’s unpredictability, his seeming disregard for constitutional norms and his general demeanor.

So we took no position on the question of which ticket anyone should support. That’s because we weren’t concerned with whom anyone votes so much as the terrible message we send our children and grandchildren by jumping on bandwagons and extolling people who don’t deserve to be telegraphed to others (or seen by ourselves) as some sort of role models, no matter what they accomplish.

Ironically, excruciatingly, within days of the release of our letter, a Jewish singer entertained a group of summer campers with a musical ode to the president. It included lyrics like “It’s been four great years/Four GREAT years/And you know don’t you really know/You’ve been heaven-sent, Mr. President/To stand strong.”

Expressing hakarat hatov, gratitude, and showing respect for leaders are entirely proper things. But putting a politician on some quasi-religious pedestal is odious. This isn’t North Korea. A song exalting and lionizing a political figure is profoundly un-Jewish.

I can do no better than repeat the words we wrote in our letter: “When we vote, let us do so as Torah Jews, with deliberation and seriousness. We are not inherently Democrats or Republicans, conservatives or liberals. We are Jews — in the voting booth no less than in our homes — who must be committed, in the end, only to Torah.”