The Jewish community has a blind spot: class differences 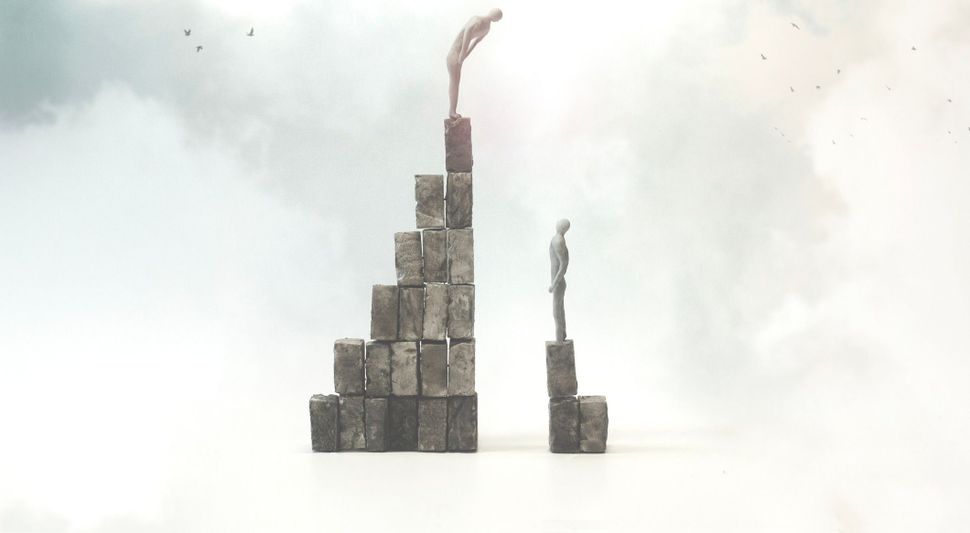 A few months ago I interviewed a Jewish member of an interfaith couple as part of a research study conducted by Rosov Consulting. During the interview, I heard an anecdote that perfectly illustrates the way that Jewishness is implicitly classed: At an event for interfaith couples, a Jewish man met a couple in which one member was a lawyer and the other was a police officer. Without thinking much of it, the man made a quick assumption that the lawyer was the Jewish person in the couple. He was surprised to find out that in fact the police officer was Jewish.

His mistaken assumption and subsequent surprise at being wrong are not just a singular anecdote; they expose a class element to normative Jewish identity that we just don’t talk about. And the truth is, those who cannot conform to that class identity have a more difficult time being recognized as Jews.

Class, a taboo topic in the U.S., shapes Jewish communities and the experiences of its members, and now is the moment to start the conversation about it, as the economic catastrophe wrought by COVID-19 will resound through the U.S., Jewish communities included, for a long time to come.

Class is notoriously difficult for Americans to talk about. This is in part because it represents a hierarchy that rubs uncomfortably against cherished convictions about the fairness, justice, and meritocracy of U.S. society. While we tend to think of social class in terms of how much money people have, there is much more to it than wealth; class status is linked to identity through lifestyle and systems of meaning that both express and maintain class boundaries and are passed on through class-specific socialization.

Crucially, the practices, attitudes, and values of different social classes are relational and oppositional. Practices valued by one class are often scorned by the other, and part of the making of class identity involves opposition to and refutation of other class identities.

This should matter to Jewish communities because class may shape these communities in particular ways and because Jewish identity itself can be classed; as the case of mistaken cop identity in the above anecdote reveals, Jewish identity is associated with the upper-middle class. Ultimately, this can result with an inability to “see” Jews who do not fit our expectations of what Jews look like — or speak like, or eat like, or walk like, or dress like, or think like.

How members of the community are valued and included is important. Programs and events offered by the organized Jewish community are highly dependent on the generosity of the wealthiest members of the communities. This philanthropic base, an incredible triumph in so many ways, can create an uncomfortable balance of power that can devalue the contributions of those without much or any disposable income.

For example, in another interview for a study I did, a Jewish educator with a Masters in Jewish Education recounted being asked to work extra time as event staff for a donor gala. While picking up trash afterward, she was told by an attendee at the gala that this attendee would never work so hard for such little money­. It was a truly demeaning experience.

Both the economic and cultural dimensions of class difference create obstacles to building Jewish capital for poor, working-class, and lower middle-class Jews. Even the cost and class environment of many educational offerings are obstacles to acquiring increased knowledge of Hebrew and Torah.

Why does this all matter now? The ability for many to contribute financially to the community will be strained by the pandemic, and for some time to come. There is a need for creative ideas around Jewish education that can sidestep some of the class and financial issues that present obstacles to those who are not upper-middle class.

We need interventions that examine some specific ways that poor, working-class, and lower-middle class Jews are excluded from organized Jewish life. Individuals who plan programs or are in other communal leadership positions should explore further avenues for inclusion of all Jews, to catalyze expanded participation in and vibrancy of Jewish communities.

In this time of ever-deepening economic anxiety and uncertainty, Jewish communities must overcome the silence and discomfort around discussions of class, in order to continue building and maintaining thriving institutions that welcome all their members. This must include increasing the ability to “see” Jews that don’t fit normative models, from a racial or class point of view, as well as learning to include and value the kinds of contributions that those with little financial means can provide.

In this sense, COVID-19 presents an opportunity to engage in individual and institutional reflection in ways that can transcend a response to the pandemic and inform creative and inclusive new approaches to Jewish communal life.

Annie Jollymore, MA, is a Project Associate at Rosov Consulting, a mission-driven company that works with funders and grantees to inform and improve Jewish education and engagement.

The Jewish community has a blind spot: class differences