Call it what it is: Normalization of men. The women stayed home. 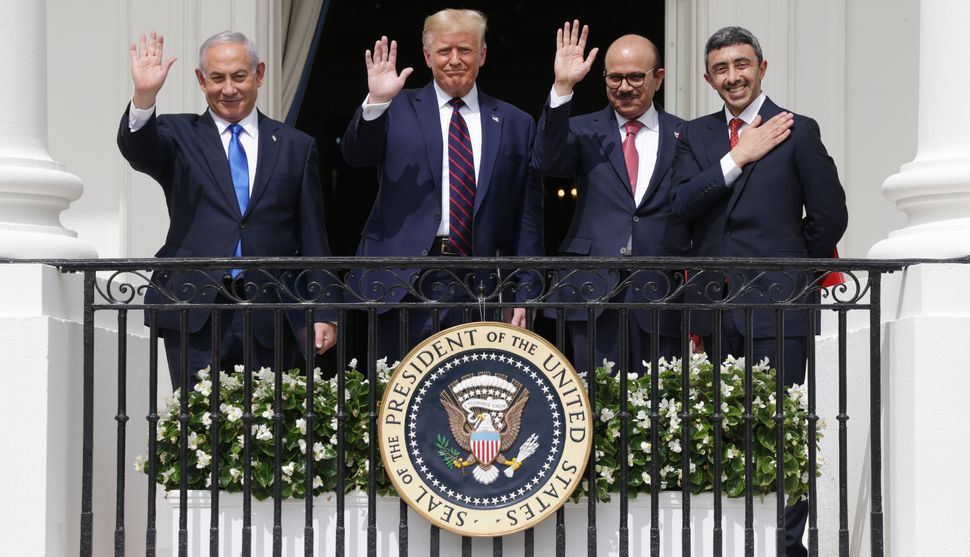 On Tuesday, on the White House lawn, Israel, the United Arab Emirates, and Bahrain celebrated the signing of the Abraham Accords peace deal between the three countries. The spouses of the U.S. President and the Israeli Prime Minister were the only women participants in the normalization signing ceremony. This is not a coincidence.

Women have been entirely absent from recent negotiations in the Middle East. Even Sara Netanyahu and Melania Trump’s walk across the lawn seemed performative, symbolic of their supportive roles to the men of action.

Historic action remains the purview of men, while women observe from the sidelines.

In this regard, the agreement between Israel, the UAE, and Bahrain is not historic or transformative at all; rather, it continues a longstanding reality of diplomacy and international relations: It is created by and for elite men.

With some notable exceptions, most negotiations between Israel, Arab states, and Palestinians have been conducted by men. To this day, the number of women at the table in an official and unofficial capacity (formal negotiations & track II) is in the single digits. Representing Israel, you have Prime Minister Golda Meir, Justice Minister Tzippi Livni, and a few mid-ranking women who have been largely erased from historical accounts of negotiations.

And this is par for the course. My research on gender equality, political representation, and political leadership in Israel shows that women remain absent from decision making centers and are prevented from implementing social change.

Netanyahu is not known for promoting women. Senior women in his party are “rewarded” with positions like the Minister of Gender Equality, a ministry without a clear budget or ability to enforce existing gender legislation. The Social Equality Ministry was not even able to guarantee women were properly represented in the negotiations. All this despite Israel being the first country to adopt UNSC Resolution 1325 when it added section 6c1 to the Women’s Equal Rights Law. The landmark UN Resolution 1325 adopted in 2000 calls for the equal representation and full involvement of women, and the consideration of gendered perspectives, in all peace and security efforts.

Prime Minister Netanyahu’s practice reflects common political patterns in Israel. My research shows that as women gain seniority in Israeli politics, they become increasingly marginalized within their parties and the legislature. They are forced to focus almost exclusively on gender issues without support from colleagues.

And the new Abraham Accords agreement is likely to exacerbate the disadvantages women in Israel face due to a lack of representation and growing wealth gaps.

Prime Minister Netanyahu’s messaging in support of normalization focuses on the agreement with the UAE and Bahrain as a catalyst for economic opportunity. But it’s crucial that we ask who is likely to benefit from the expansion of economic relations and trade between these countries?

Over the next few weeks and months we will hopefully learn more about the details of this agreement. However, it is fair to assume that the UAE and Bahrain are particularly interested in gaining access to Israel’s specialized industries — military and security production, high tech and surveillance, and pharmaceuticals.

So why are women in Israel unlikely to benefit economically from expanded trade? The work force in Israel is deeply segregated by gender. Women are underrepresented in the industries and corporations that stand to increase their revenue and are concentrated in low wage work.

According to the Adva Center, “The most prevalent professions among women are teachers, administrative workers and caregivers, in which salary levels are relatively low, even for employees with college degrees. Men are concentrated in high-pay technical and managerial professions (managers, computer programming), as well as in driving and security occupations.”

Furthermore, the gender pay gap in Israel grows as the educational level increases. This is in part due to women’s caretaking and differences in work hours.

In other words, women are already excluded from the industries that benefit from normalization. The wealthy in Israel will get richer, and the wealth gap will increase.

Moreover, Netanyhu’s policy priorities reflect his belief that political success in Israel depends on a commitment to a hyper-masculine approach. By branding himself as a leader on security, the economy, and international relations, he is rewarded with electoral support from a significant number of men. There is a gender voting gap in Israel that resembles global trends, women are more likely to support leftist parties. Netanyahu has no electoral incentive to include women or consider women, because his base of support is mostly men.

So let’s call the Abraham Accords what they are: Normalization for men. The women stayed home.

Call it what it is: Normalization of men. The women stayed home.